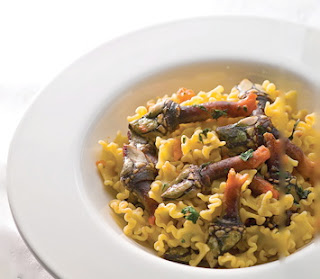 Tu percebes is the second person singular of the Portuguese verb perceber,to understand. Do you understand how Percebes(Goose necked barnacles) come to the dinner table.They are certainly not the best, most glamorous thing on the  fish market slab.Resembling strange creations from the makers of Doctor Who,they might be a dish served up as part of a bush tucker trial.Lets face it, there's no pleasure in watching other people suffer – not even when it's Nadine Dorries. Fully grown, these tube based crustaceans have a sooty finger-thick trunk with a rose-coloured inner tube. At one end is a scaly head that is used to cling to the granite rocks of the storm-bashed Iberian coastlines. and at the other a diamond-shaped foot reminiscent of Jurassic Park. At high tide this foot opens to reveal tiny pink tendrils through which the barnacle filters the surrounding seawater to feed.They thrive in areas that are exposed to the hard lashings of the Atlantic waves, so the collectors, called percebeiros, have to swim in wet suits out through choppy seas,clamber down steep slippery rocks or try to jump from boats bobbing in the rough sea to reach them. Once on the rocks the harvester can easily get clobbered by a breaker or simply slip into the sea. Then there is the problem of what the fishermen call "percebes greed". Driven by financial gain the percebeiros risk their lives in pursuit of this bounty.In Spain (Galicia), particularly in the Christmas season when percebes are the stars of the Spanish festive table and the weather is at its worst, these cultivated barnacles can command whopping prices of up to 100 euros per kilo (£85) in the market."Blistering barnacles"Buccaneer Captain Pugwash would have uttered.
In Nazaré, just 40 minutes up the coast from Lisbon, Portugal´s most famous picturesque fishing village,barnacles are much cheaper. Until not too long ago, Nazaré fishermen were still seen using oxen to pull their brightly painted boats from the ocean and even today many locals still wear their characteristic traditional costumes -- the fishermen have check shirts and trousers, and the women wear several layers of petticoats. The fishing boats are Phoenician in design with bright colours and eyes painted on the vessels, supposedly with the magical power to avert storms,so more conducive to hunting barnacles.Here, and all down the Silver Coast and along the more rugged coastline of the West Algarve, a 300g dose (portion)of goose percebes will set you back just six or seven euros,and with another five euros for a bottle of the house plonk you can glut yourself silly for about a fifth what it would cost you in Galicia.These particular percebes may not be as gloriously rotund as I remember Rick Stein describing their Galician rivals.They are however every bit as sweet, so with food of the gods at recessionary prices,who can complain.
If you want to try them at home and your fishmonger can supply them, here is a more domestically accessible recipe from El Corte Ingles.As you cook the barnacles close your eyes and inhale the scent.Imagine you can smell the rocks.An incredible ozone of the sea will assault your nose like a tsunami.Strong as Poseidon´s armpit but heavenly like a mermaid´s burp.Serve your guests with bowls of warm pasta,topped with the percebes.Hungry hands will be eager and waiting to tear apart the tightly woven sleeves, unleashing the pure essence of the ocean trapped within.Not a drop of goodness escapes the barnacle when it´s cooked and there is a gentle intensity to the flesh similar to octopus, but far more refined.Even though they are crustaceans they are nothing like their cousin the mussel,They´re simple pure and the best of the sea boiled down in a mouthful.
The ideal serving suggestion is with a bottle Quinta da Aveleda.The grassy bite of the vinho verde cuts through the sharpness of the Percebes giving you the perfect match of land and sea surf and turf.
Massa com percebes (pictured above)
400g de Percebes cozidos (boiled)
300g massa (à escolha) pasta of your choice
4 dentes de alho,cortado em pedaços - 4 cloves of garlic chopped
2 tomates maduros (ripe)
azeite q.b. olive oil
sal q.b. sea salt to taste
piri piri q.b. Chilli flakes
salsa picada q.b. chopped parsley to taste
Cook the pasta in salted water. Meanwhile, peel the barnacles, leaving them standing up like chickens legs. Put a frying pan on the stove with the olive oil and chopped garlic cloves. Skin the tomatoes, remove them the seeds and chop them coarsely, adding them to the sauteed garlic. When the pasta is al dente, drain it and pour it into the skillet along with the percebes. Add a pinch of chilli to taste and sprinkle with a tablespoon of chopped parsley.