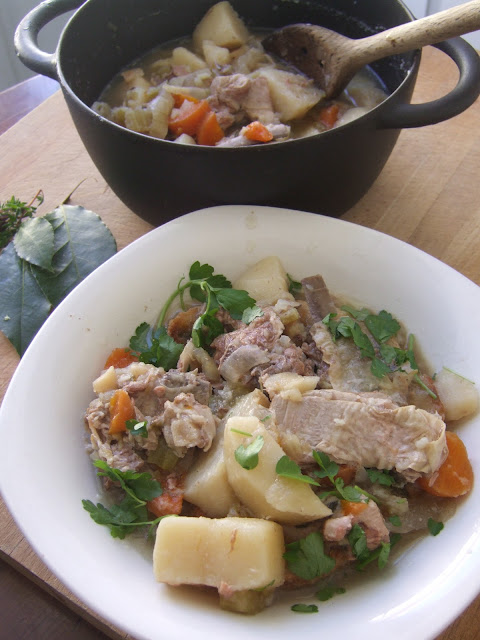 Irish stew is a celebrated national dish, yet its composition is always a matter of dispute. Purists maintain that the only acceptable and traditional ingredients are neck mutton chops, potatoes, onions, and water. Others like myself would add such items as carrots, parsnip, celery, and sometimes pearl barley; but the purists maintain that they spoil the true flavour of the dish.On the contrary, I thing it brings an unctuous sweetness that adds to the starchy-soft quality of the potatoes and the melting richness of the bone marrow.
The trick with this classic one-pot is to use a cheaper cut of meat, which means you’ll skimp on price but not quality (like) .
Widely celebrated by Irish migrants around the world, Saint Patrick´s day is one of the few saint days that is not celebrated here in Portugal.I find it surprising that, other than by its expat community, this Roman Catholic country ignores a missionary who was considered an Irish apostle and that same country´s patron saint.Well for me it was something else - a weekend of celebrating Irish food.No tinkering here  mother.I cooked two of Irelands greatest dishes in their pure form (I hope). Colcannon and Irish stew. I am sure someone reading this in County Connemara will be upset about something,maybe my embellishment of herbs,parsley thyme and the odd sprig of mint for garnish. I can lay no claim to originality here, Irish stew is Irish stew. My only break with tradition was that like its Portuguese counterpart ( Ensopado de borrego ) I served it on slices of fried bread to soak up that all important broth.
The cut of meat is crucial to the dish,mainly late season lamb or mutton, so this is the time of year to celebrate this fine dish just before the new season lamb is slaughtered.Yesterday was Saint Patrick´s day, conveniently falling on a Sunday and therefore allowing for "just what the doctor ordered". There was no doctor in the house on this occasion but this heart warming stew managed to shut out the cold, howling gale and hailstones falling in the street outside.Here is what you need to make the definitive Irish stew,(bearing in mind the bulk of the cooking is done the day before).


Pre heat the oven to 160C/Gas mark3.
Peel and slice the onions into thick rings.Cut the celery into short pieces.Peel the parsnip and the potatoes and cut into fat chunks.Peel and cut the carrots into medium chunks.Put all the vegetables into a large deep pot or casserole then tuck in the chops, thyme and bay leaves.Season with white pepper but no salt at this stage.Cover with water and bring it slowly to the boil.Skim off the worst of the scum that will appear on the surface.Cover the top of the stew with a sheet of greaseproof paper,then cover with alid.Transfer the pot to the oven and leave it slowly cooking for two and a half to three hours.Remove the lid.The liquor will be thin,thickened only by the starch from the potatoes.Chop the parsley and mix it in carefully,so as not to smash the vegetables or damage the meat..season with salt (I used My own home made celery salt) and pepper.Leave overnight.The smells that greet  you as you lift the heavy lid of the casserole are so tempting that they will draw you in and make you want to eat it there and then,but you must resist.
The next day, skim the fat from the surface,then re-heat very slowly on a low flame until the meat is thoroughly hot and and the broth is bubbling Check the seasoning-be generous and serve immediately in bowls with a piece of fried bread on the bottom of each. 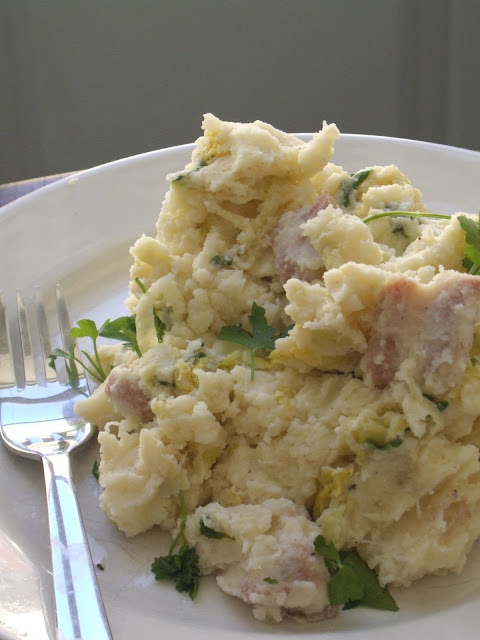 Colcannon, or Irish bubble 'n' squeak, is traditionally served unfried, with kale or cabbage  leeks potatoes and milk as the main ingredients. Often eaten with boiled ham, it can be a sound use for leftover ham, too – tear it up and mix it in with the mashed potato.
Cook 500g of large floury potatoes, peeled, cut into large chunks, in deep boiling water until tender. Slice and fry 250g of shredded leeks.Boil a couple of handfuls of kale or cabbage or amixture of both and drain. When the potatoes are soft enough to mash, drain and beat them to a light fluff with a potato masher. Pour in about 150ml of hot milk and add a thick slice of butter. Tear up about 250g of cooked thick-cut ham. Chop the kale or cabbage and ham and fold it in together with the cooked leeks. Season with salt and black pepper and serve. Serves 3-4.
There are no clever twists here so any changes to the above and you will not be making
Colcannon, and if you fry it it will be bubble and squeak or migas.