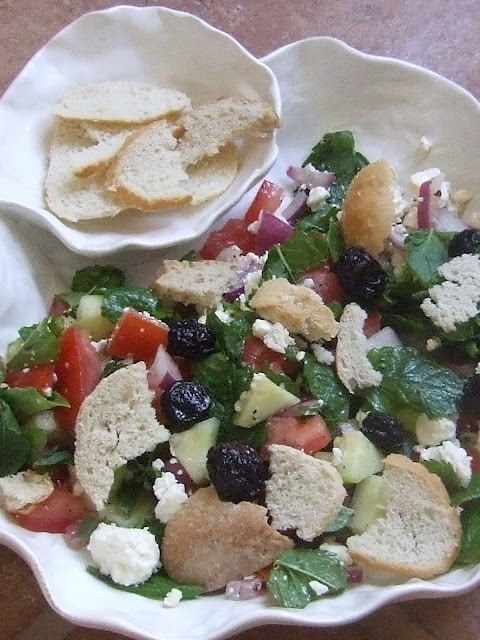 If you remember in my previous post I re-invented  Panzanella,maybe not re-invented but introduced its elements into another time and another place - Portugal.
In this second instalment I am taking you to the Middle East where Fattoush, the Lebanese bread salad, is an essential.Have you ever made it?  If not, I recommend making some immediately - it's a simple,toasted bread salad, and a brilliant way to get to know the gorgeous Middle Eastern flavouring of Sumac. Begin by toasting split-open pitta bread in the oven until crisp, then break into shards. Mix chopped cucumber, tomato, spring onion and radish, and toss with a few salad leaves some torn mint and flat-leaf parsley. Scatter the crisp bread pieces over the top, then sprinkle over a dressing made with equal quantities of lemon juice and extra-virgin olive oil mixed with one to two tablespoons of crushed sumac. "Serve with mezze dishes, or at a barbecue" the recipes always say. So why hasn´t Portugal (nation of chefes churrasqueiros  and serious bread eaters) not adopted their own version of this stunning salad? In Portugal bread is served with, but never in, salad.Well, since I had this on my up-coming list of blog posts along came an episode of Nadia G´s Bitchin´Kitchen that gave me an idea of how I could put a new spin on Fattoush.
She has been hailed  “Julia Child of the Net generation.” cooking with chutzpah while talking Broccolinese (Little Italy slang language)."Cah-peesh?"- I think you will when you read on.Well, I have become an ardent follower.Giosia is her family name and an unmitigated effrontery of food is her game.Have you no respect woman? no of course you haven´t -You nerrrrrrrdddd- I love it.

Hilarious, edutaining and deliciously demented,the Chef-comedienne Nadia G. looks at the funny side of everyday situations and turns them into occasions worth celebrating — with food! From 'Recession Recipes' and 'Impressing the In-laws' to 'Break-up Brunches,' Nadia G. rocks the kitchen with her tasty techniques and stiletto-sharp wit.Her 30 minute slots put a deliciously demented spin on cooking and give you pure theatre and great edutainment, shkoffing and cooking with chutzpah.
Back to bread salad and with a litle bit of me and little bit of G I came up with a kind of Portuguese / Lebanese riff on Panzanella.I watched her prepare a Mshalale salad with blueberries and shards of toasted pitta bread. I had no chance of sourcing Mshalale cheese so I popped to Lidl and picked up some Feta.I was recently given some dried cherries and thought this was a good chance to introduce them,so I brined them ( Middle Eastern influence being included, like it) and  replaced Nadia´s blueberries with my cherries.My salad was now becoming delightfully cosmopolitan.I couldn´t source Pitta bread so I made some thin Melba toast with some left over bread,after all bread salads are all about yesterday´s bread.Finally I made Nadia´s zippy lemon dressing to finish it all off.Thats a modern Vinaigrette you nerrrrddd. At this point I had probably also given Claudia Roden  conniptions.“Now that we’ve got all our ingredients lined up, Tsaketa! Let’s get cooking....

1/2 cup dried cherries reconstituted in salty water
1/2 cup feta cheese crumbled
Sumac for generous dusting
To make the salad:.Place all the  leaves in a bowl with the cucumber, tomatoes and crumbled cheese. Crumble tshards of the bread over the salad and drizzle with the lemon dressing. Sprinkle with a handful of sumac and the re-hydrated cherries.

To make the lemon dressing: In a jar combine all the ingredients. Shake to emulsify.