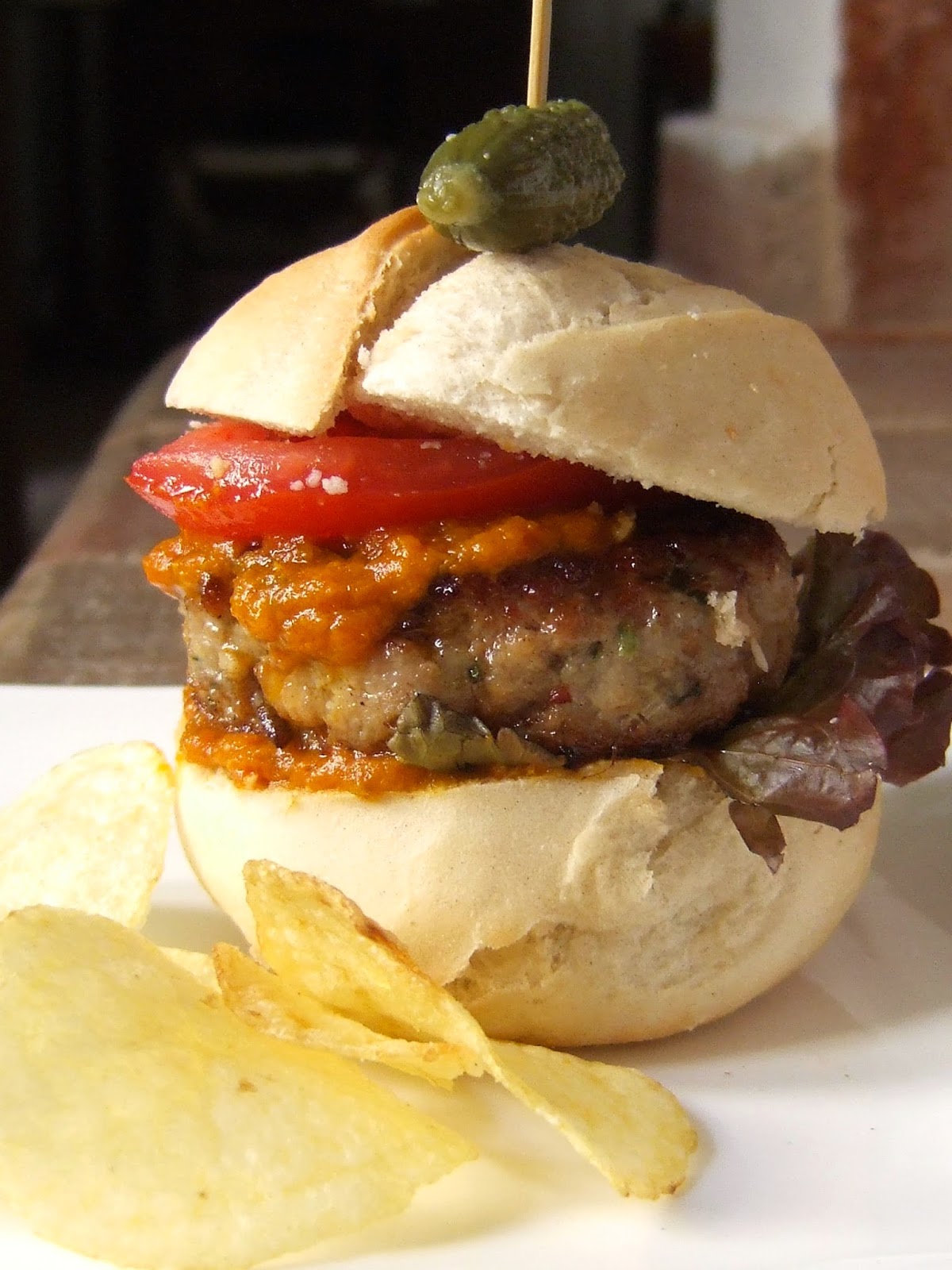 New school Thai
A recipe I have been making for over ten year has now come full circle.This is a characteristic recipe from Nigel Slater. It's a combination that plays a bit with authenticity, but doesn't seem like that much of a major departure. The left-field ingredients here are  an integral part of Thai cooking.Lemongrass, Kaffir lime leaves, (Nam pla) fish sauce and birds eye chillies (piri piri in Portugal).I know that lemongrass and lime leaves are sometimes hard to find, but the unmistakable flavour adds something extra. I started off all those years ago making the mix into quarter pounder burgers and afterwards realised their potential for being served as meatballs with a sweet chilli dipping sauce or fresh salsa.These make a great starter, part of a tapas or as canapés.These two applications of the same basic pork mince mix ran alongside for a few years before I picked up a handy hint of adding tomato purée into the mix.This made perfect sense. Meatballs are traditionally served in tomato sauce,but take the sauce away and introduce the tomato flavour into the meat mix and it lifts the spicy pork mixture.You will however need some breadcrumbs as well to maintain the right consistency without damaging the overall flavour ( breadcrumbs like potatoes absorb flavour so be careful with the quantity you use).Now having noticed the arrival of NY slider outlets in Portugal´s two major cities I thought it was time for Nigel´s taste sensation, now less than recognizable from the author´s original incarnation, to be served up in miniature version. Welcome Thai pork sliders in miniature artesan buns, served with chili coriander chutney, a bit of salad foliage, cornichons and artesan potato crisps.The NY slider concept as recreated for the Portuguese market by chef Francisco Meireles is somewhat like a fast food tasting menu ( now there´an idea ).The menu consists of the customer´s choice of three different mini-burgers allowing the possibility for the recipient to taste a variety of flavours in the same meal.

a selection of three NY sliders comprises one portion

Large handful of fresh coriander
2 sticks of lemongrass trimmed and roughly chopped or 6 Kaffir lime leaves
3 cloves garlic peeled
1 shallot peeled and finely chopped
hamburger  buns,baps or mini rolls
2 tablespoons groundnut oil
Get your butcher to put the pork through the mincer twice.Put the minced meat in a bowl.Add the soya and fish sauces.Put the chillies,coriander,chopped lemongrass,garlic and shallot in a food processor and chop as finely as you can.Add this mixture to the pork and season with salt and pepper.Mix all the ingredients till well combined and then shape into burgers patties,sliders or meat balls.Warm the oil in a non-stick frying pan.When the oil is hot,put the burgers or sliders in the pan and let them cook for aminute or two until the underside is golden,then flip them over carefully.Continue cooking for aminute,a nd then turn the heat down,cover the pan and cook for afurther four minutes.Drain on kitchen paper and serve

JUST FOR THE PURIST: The perfect patty can be a thing of simple perfection if your meat is of the best and the seasonings are correct.Don´t skimp and use any old mince.You need to buy finely ground ("duas vezes", as we say in Portugal, literally twice through the mincer).You will then have finely ground skeins of silky pink meat speckled with white fat to make the perfect burgers, sliders or meat balls.

JUST FOR THE HISTORY:According to the earliest citations, the name may have originated aboard U.S. Navy ships, due to the way greasy burgers slid across the galley grill while the ship pitched and rolled.
Email Post