Cozido,to every family and nation a stew 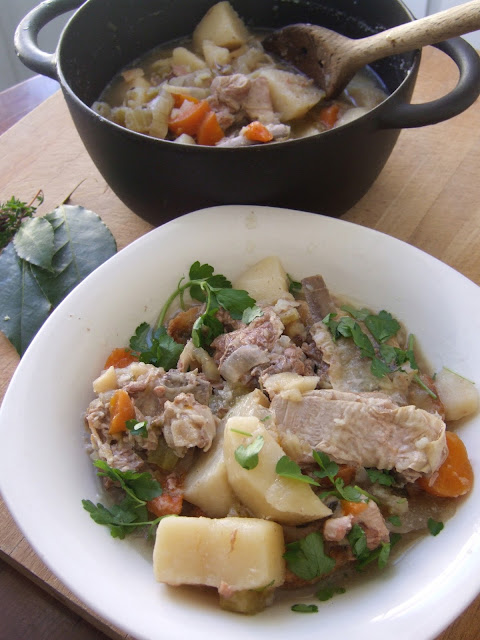 Ensopado de borrego Irlandes
Every culture has a tradition of a boiled meat dish.Each nation across Europe has adapted the technique of boiling meat to their own style.These recipes have developed over time but always followed the same  principle.The end result however encompasses completely different flavours.Most commonly eaten during winter these hearty dishes help fend off  cold and wet climates.
You might ask, am I taking you back to  the Middle ages? Traditions, in fact often date back as far as the thirteenth century.Boiling meat was a great improvement on roasting, as it meant one owned a pot,which implied there was a home or a hearth, and perhaps, though I shouldn´t say it, a wife to go with it.
From land to table, cooking and eating create a sense of community, a sense of belonging and most importantly a sense of family and friends. In Portugal, life still centres a lot around the table. Food and meals are still the cornerstone of every family and social event. You cannot have a social or family gathering without food.Portuguese cooking is about embracing both past and future, both tradition and change….it is not only about heritage, but about building a lasting memory….about how modern Portuguese cooking remains very Portuguese.When you ask a tourist about the most memorable attraction in Portugal, he or she will most likely mention food, before anything else.
Although modern life has changed many Portuguese culinary traditions, the fact is that they are still quite traditional when it comes to cooking… and eating.
The Mediterranean diet is still the basis of eating habits and there are a set of skills and practices that remain untouched and close to ancient traditions. These intangible treasures that every family and community hold should be safeguarded and proudly passed on to future generations.They are a way of upholding family values and family heritage….a way of creating memories and food is no doubt one of the most precious Portuguese treasures.Ancient recipes that were traditionally reserved for festive occasions and down-to-earth recipes made by the poor communities are now making their way into the modern Portuguese kitchen.
More and more, Portuguese cooking is taking cues from the past and drawing reference from  its traditional homestyle cooking. Modern appliances and techniques have only taken the art of cooking to perfection, for the ingredients remain simple and undergo very little processing. So basically, What you see is what you ….get… 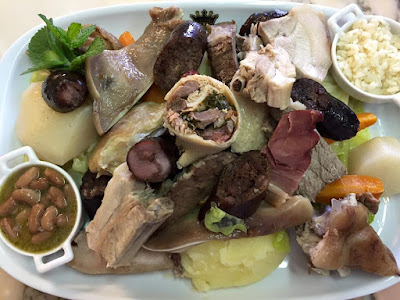 The traditional Portuguese stew, known as cozido is allegedly attributed to Jews. It was the Sephardic Jewish people who were responsible  for introducing and spreading the concept of boiled meat that influenced the Iberican cuisine. That's because on Shabbat - the day of rest in Judaism - they could not,  among other things, light a fire and cook. So they cooked meats and vegetables in the same pot the day before, for consumption after sunset.A true Portuguese cozido is a unique combination of beef, pork, chicken and sausages generously cooked with cabbage, carrots and potatoes.Since the origins of this dish are humble (this is a rustic recipe meant to use up the cheaper cuts of meat) it contains ingredients that might be unsavoury to more  refined palates, such as pig’s snout, pig’s feet, pig’s ear and blood sausage.
Some aficionados of cozido prefer the meat less tender while others prefer it falling off the bone. Traditionally a well plated dish will consist of some quantity of one of everything mentioned below albeit in a smaller cut up portion.
If all the various cuts of meat are not available or some of them disgust you don’t worry, all you need to maintain the spirit of the dish is to have a sampling of all the meats (pork, beef, chicken)  sausage and the vegetables.
I have give no quantities below as this is a guide for you to choose from and will also vary by how many people you are serving.
stewing steak (in one piece)
pork ribs
pork hock,
pork snout
pork tail
pork ear
pork neck bones
chicken
morcela sausage (a Portuguese blood sausage)
chouriço
salpicao sausage (a Portugese sausage)
farinheira ( a Portuguese smoked sausage made mainly from wheat flour, pork fat and seasonings (white wine, paprika, salt and pepper). Its original recipe did not contain pork fat; it was invented by the Jews during the 15th century to deceive the Portuguese Inquisition by making them believe that they were converted to Christianity by showing they were eating pork).
lean unsmoked bacon toucinho, pancetta etc
turnips
potatoes
white cabbage quartered
carrots, scraped
greens
rice (optional)

Place all the meat except for the sausages in boiling water with enough to cover all and allow it to  cook at a low boil. Add salt to taste. As each item of meat cooks, remove it from the broth into a separate dish and keep warm.
Different meats will cook differently so check your meat periodically for your desired tenderness.
When all the meat has cooked thoroughly place the white cabbage, potatoes, carrots and turnips in the broth and cook.  Remove vegetables as they are cooked and set aside with the meat.
Once again note that vegetables may cook at varying rates so check periodically. Add greens and boil until tender and cooked.  Finally add the sausages and boil until cooked being careful to watch the farinheira as it can explode.
When the sausages are close to being fully cooked gently place the meat back into the broth pot, along with vegetables so that all the ingredients can come up to temperature. Place the vegetables last into the pot.
To plate the dish place the cabbage on a platter. Slice the beef, pork, chicken and sausages into manageable 2-3 inch  pieces and place on top leaving the bone in pieces a little bigger so as to not distort the natural shape of the meat.
Garnish the dish with the remaining vegetables around the platter and top with slices of sausage.
Some like to reserve some of the broth and cook some rice in it.  To do so take some broth out before adding all the ingredients back into the pot to reheat.  Remember that liquid to rice ratios are: 1 quantity or rice to 2 of liquid.

European variations on the the theme of boiled meat 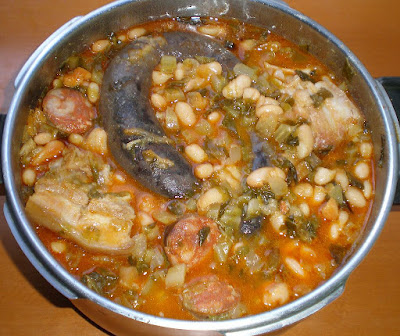 Cocido montañés
En españa Cocido montañés is a hot and heavy dish whose origin was in the 17th century.It was cooked to stave off the cold and wet climate in the Cantabrian mountains. It is usually served as a starter course (no really), but may also be the main course of the meal. 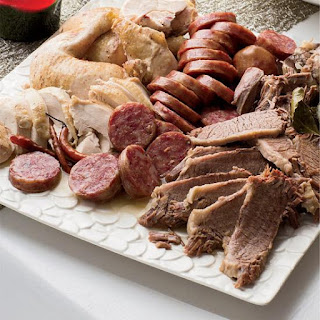 Bollito Misto
In Italy Bollito Misto is served in restaurants like a ritual.Silver carts with compartments for each cut of meat,belly,cheek ,tail, tongue,head and cotechino,parade up and down dining rooms the length and breadth of the country.The crowning glory,however is how it is served.A plethora of sauces may be served.emerald green salsa verde,red and yellow pepperonata and candied fruit mostarda which bring festivity and flavour to what might be a rather anaemic looking plate of meat. 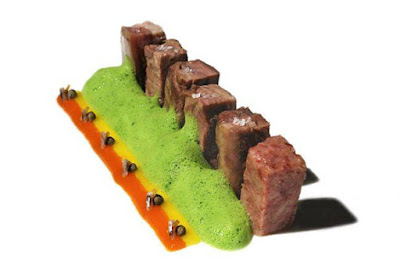 Pot-au-feu (French pronunciation: ​[pɔ.to.fø] "pot on the fire") is a French beef stew. According to the chef Raymond Blanc, pot-au-feu is "the quintessence of French family cuisine, it is the most celebrated dish in France. It honours the tables of the rich and poor alike.

This is my idea of boiled meat, a good old unctuous oxtail stew.I prefer to keep different types of meat separate and not mix them in the same dish.The trick with this classic one-pot is to using a cheaper cut of meat, which means you’ll skimp on price but not quality.What´s your favourite recipe for boiled meat and are you of the "use it all mindset"?

Most families will tell you that the topic of conversation at lunch will be: what´s for dinner? Now why does that remind me of my father-in -law?