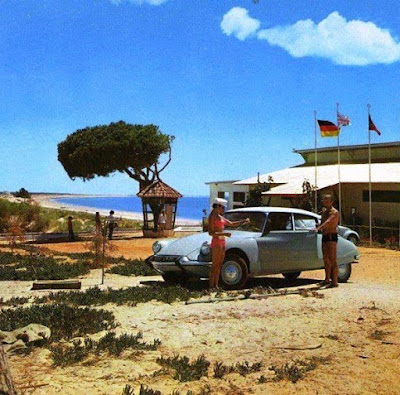 The advert says "ssshhh secret places, dont tell anyone, sssshhh its secret".The independent traveler always wants to be the first to discover their own secret place and keep it to themselves. so that if and when they return they will find it still remains unspoilt and not have fallen foul to the hand of mass tourism.In the 1980´s The "east" Algarve was always our secret place. We returned to holiday each year and nothing ever changed very much.The region remained resistent to and untouched by development mainly due to the fact that the coastal area east of Faro stretching to Vila Real de Santo Antonio is the Parque Natural da Ria Formosa.The Ria Formosa lagoon is a system of barrier islands that communicates with the sea through six inlets. Five of these inlets are natural and have mobility characteristics.Is it still a best kept secret? Yes in many ways, and in other ways what change there is  has been for the good.Casa Rosada is ten years old this year. Some recent guests described us as Shangri-la.This expression has now become synonymous with any earthly paradise, and particularly the mythical utopia immortalized in the 1933 novel ´Lost Horizon`. Shangri-la is a permanently happy land,isolated from the outside world.In the novel the people who live there are almost immortal, living a life of longevity and only very slowly aging in appearance.Although I come from a family where longevity prevails we can not possibly keep up appearances but Casa Rosada can claim to possessing highly desirable or near perfect qualities.We want to make our guests feel they were coming home.
The word also evokes the imagery of exoticism of the Orient.Exoticism, by one definition, is "the charm of the unfamiliar"and this is exactly what the Casa Rosada is, the easternmost Bed and Breakfast in the Algarve. Just three hours flying time from the UK or Ireland and you feel you are worlds away,waking up the next day in the "Algarvian Orient."
I can never decide whether it is the weather, the opportunity for the unconventionality or  an escape from the rat race that drives the British to live abroad. Today so many of us have moved abroad that Chianti has become Chiantishire, and one is hard pushed to find an Italian there.While in Spain whole areas have become ghettos, affection has gone while xenophobia often remains. Here in Portugal Algarve became ALLGARVE for a while.An absolutely disgraceful and disrespectful excuse for a gimmick to manage events for Algarve tourism.A survey completed by travellers at Faro airport seemed oblivious to this and showed that 86 percent of the foreigners who holidayed in the Algarve  and participated in the survey left the region unaware of the existence of the Allgarve programme.Only 9 visitors were interested in the events anyway.
The study further questioned 767 residents and non residents in the region, of whom only 32 percent knew about the programme.Thankfully there was opposition and it is no more.As fast as the large letters spelling out the word appeared on billboards or by roadsides the second L was defaced to spell out the original Algarve.
So what do you come to the Algarve for? Gastronomy and beaches were the biggest response from the survey. But it seems everyone else comes here for this too, so if you are in the promoted areas of tourism don´t be surprised to find yourself in the company of non-native speakers.And, more importantly, non-native eaters and drinkers. Nowhere in the country is there more evidence of a bland internationalisation of local food, all done to please money spending visitors.Its tragic.So to discover regionally specific dishes that have avoided  tourist influence you´ll need to get off the beaten track, heading to the far East, the North, the far West and other unspoilt areas of the region.If you venture inland where other tourists and their requests for toasted sandwiches and chicken piri piri rarely venture,you will find the real Algarve.
So is the best kept secret still there? Yes,but you need to check it out and avoid the hotspots.The "orient" that is Castro Marim is so far from "Little Britain" and expatriotism that you might be forgiven for forgetting karaoke hen nights and Brits behaving badly.You never see anyone lying in the gutter here at 10.30 in the morning.Here in the "Algarvian orient" the difference is between oversubscribed and undersubscribed.If where you eat doesn´t matter as long as you can eat and drink this will not be the place for you.The difference between now and then is there are now more distinctive restaurants, purveying interesting menus that delve deep into the regions gastronomic wealth.What luring estate agents were reprimanded for naming "The Spanish Algarve" is only 5 minutes away.We prefer to call it Andalucia and enjoy the ranges of tapas and alimentation on offer there.
98 percent of visitors passing through Faro airport said they would recommend the Algarve as a holiday destination, and 96 percent said they would come back. That is to me almost all of them.Even sunshine on a rainy day is not a bad thing.Try and put what I am saying to the test, you will only regret it if you don´t.Book now by 31st January and get 2015 prices.