Jamón it up for the weekend, uma reinvenção frances 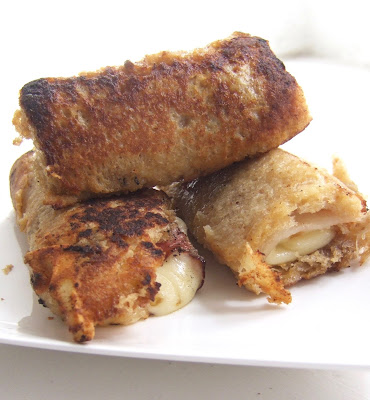 We're Jamón,............. Hope you like Jamón, too.
Bread, butter,salt meat and cheese.What more could a man ask for breakfast? I just crave these combinations of flavours in the morning.The Portuguese do it so well with so many variations on this theme.

Tosta mista
I first sampled the tosta mista on holiday in Tavira in 1995. I have never looked back but have now added to my favourites folio the Folhada mista. 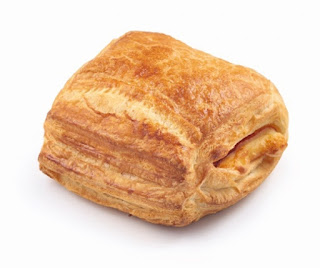 Folhada mista is  basically a variation on the same theme but wrapped up in pastry as opposed to toasted.The thespian has a sweeter preference for his breakfast and something french in origin, the pain au chocolat.So when I return from walking the dog and a quick pop into the shops, I very often return with a sweet and savoury alternative for our two breakfasts.I have often made french toast or when in Portugal ,rabanadas, but it is not the same as a good old bit of fried bread, ham, cheese and a dousing of egg and milk.
There is also a renowned Portuguese toasted sandwich called The Francesinha,which I am determined to make one day soon (watch this space) as I have never been in the mood to eat it in a restaurant due to its over-indulgent nature, but am nevertheless curious to play around with it at home and possibly tame the beast a little.The Francesinha (meaning ''Little French woman'' in Portuguese) is Portugal's decadent answer to the croque-madame. It's a huge meat-filled monster, topped with egg and cheese, smothered in a beer and port wine based gravy, and always served with French fries.The only token gesture to France is that this sort of toast was invented back in the 60's by a Portuguese emigrant who had just returned from France and decided to adapt a very well-known french recipe - the Croque-Madame.The actual recipe for a Francesinha bears little resemblance to the actual Croque-Madame and has become enormously famous, especially in Porto.In the meanwhile I have made a twist on French toast which is exactly what you need to get your weekend started on the right foot.Well I dont know about you,but it´s certainly what I enjoy on a wintry Sunday morning with coffee and the papers. I have called my rolled up reincarnation the Francesinho ( "little frenchman")so not to be confused with that little french woman "Francesinha."
The classic melting cheeses here are Gruyere and Emmental but there are so many others that will work well, giving you a voluptuous melting toastie.I used Emmental but Provolone,Cheddar or one of those gooey Italian cheeses like Fontina or Taleggio might have been my first choice if I had access to them.Taleggio is the creamier of the two, but Fontina melts brilliantly and has a bit of a clout to it.
The belter of the 'melters' has to be Camembert. Cut into thick slices, it oozes rather than melts and becomes quite sublime.


HOW I DID IT
I got my slices of bread,cut off the crusts and rolled them really flat with a rolling pin.
Keep the crusts because I am going to tell you how to do something witty with them in a future post.Lay some smoky cured jamon, presunto or prosciutto on each slice and trim it to fit exactly.Lay strip of the cheese of your choice to cover the ham.You could grate the cheese if you preferred.Carefully roll the bread slices up into cigar shapes and put them seam side down on a plate.In a shallow dish beat an egg together with some milk,salt and pepper. Melt some butter in frying pan large enough to accomodate all your slices.This is more economical than normal square french toast as you can cook all your little french men together rather than in batches.Dip, not bathe, each rolled up piece in the egg wash
and then fry them seam side down in the melting butter turning them two or three times so that all sides get evenly browned.Remove them from the pan with tongs and eat the straight away and then you´ll be ready to make more!!Simple as.....
enjoy your fast and fabulous breakfast.