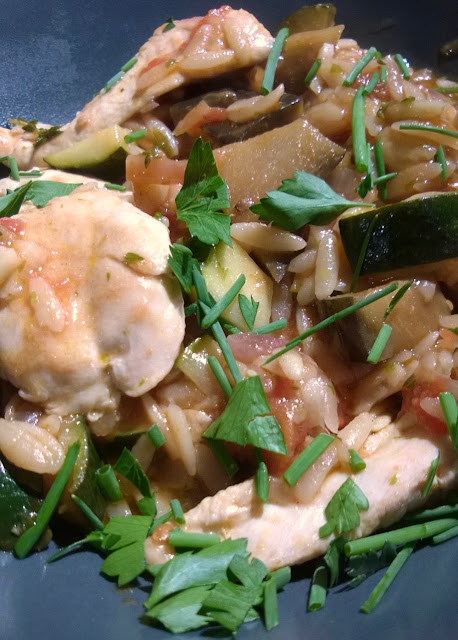 Can you even believe that it’s November,and the clocks have gone back,and its dark by five o´clock? I seriously cannot even wrap my brain around it and that’s probably due to the fact that I’m used to residing where it’s 85 degrees with 100% humidity and SUN every day.The following dish I feel fits the feeling you get with the shift in the seasons: summer starts to feel like a distant memory and the craving for richer, more comforting foods kicks in.It's a 30-minute, no fuss, kind of chicken dinner.I think it’s great for autumn. The flavours of the thyme, garlic and chive mixed with the punchiness of the paprika makes it a taste sensation.
I love the idea of everything in one pan and wham bam, your dinner is done! What I don’t enjoy is when the recipe asks you to cook the pasta, rice, chicken or other ingredients in a separate pan and then add them to the skillet.Not so this recipe,which also introduced a new ingredient into my repertoire,massa pontinha.
This rice looky likey shouldn't just be reserved  for soups - ‘massa pontinha’ (tiny pasta which looks similar to orzo or risoni ) is a versatile pasta that's fantastic in everything from salads to casseroles and side dishes.
Massa pontinha is available in the pasta aisle of most Portuguese supermarkets.Half a 250g packet will make enough for around four people; it’s very cheap too.


It looks like large grains of rice but is actually a type of pasta.Like most dried pasta, pontinha is made from a mixture of durum flour, semolina and water, which is kneaded into a dough before being rolled flat and shaped. The result is a creamy coloured, oval-shaped pasta with distinctive pointy ends.
Although massa pontinha is classified as a soup pasta,for a simple salad combine cooked pontinha with olive oil, garlic, fresh lemon juice, chopped tomatoes, basil and pine nuts, then sprinkle with parmesan to serve.

Alternatively, try stuffing aubergine and or peppers with cooked risoni, zucchini, semi-dried tomatoes and fresh herbs, and bake in the oven.
You don’t need to cook risoni when including it in soups or stews – simply add it to the saucepan eight to 10 minutes before the dish has finished cooking. When using it in salads and other dishes, cook in a saucepan of salted boiling water for eight to 10 minutes or until al dente.
Frango pontinha no forno

Serves: 4
Prep time: 15 minutes
Cooking time: 15 minutes
1 tbsp home made pesto diluted with olive oil
1 red onion, peeled and diced
1 courgette, trimmed and diced
1 aubergine, trimmed and diced
4 sprigs fresh oregano
4 sprigs fresh thyme
3 cloves garlic, finely chopped
1 tbsp tomato puree
250g pontinha /orzo
400g chopped tomatoes
250ml chicken stock
400g chicken breasts, cut into 1cm slices
1 tsp sweet smoked paprika
Salt and black pepper
Small bunch parsley, roughly chopped
Small bunch chives, finely chopped
Heat the oven to 200C/400F/gas mark 6. Melt half the oil in a heavy-based flameproof casserole dish over a medium-high heat. Add the onion and cook for one minute, then add the courgette, aubergine, oregano, thyme and two chopped garlic cloves. Fry for five minutes, until the vegetables are starting to soften.
Add the tomato puree and orzo and mix to combine. Pour in the chopped tomatoes and chicken stock and bring the mixture to the boil, stirring regularly. Put the lid on and slide the dish into the oven.
Meanwhile, melt the remaining oil in a large frying pan over a high heat. Add the sliced chicken and the remaining chopped garlic clove. It is more important at this stage to colour the meat than to cook it through.
Sprinkle in the paprika along with a pinch of salt and pepper, and toss the whole lot together.
Remove the pasta from the oven and carefully take off the lid, stir in the chicken, slide the lid back on and bake for 10 more minutes. Then take the dish from the oven and stir through the parsley and chives. Serve straight from the dish.
Email Post