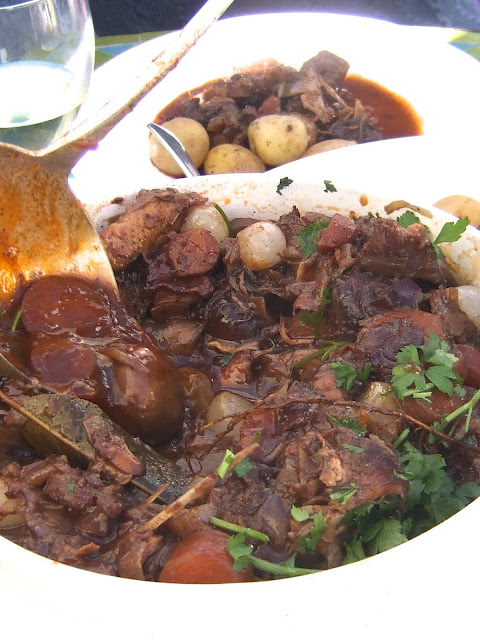 Daubes,Bourguignons, Pot-au-feu ,Irish stew Carbonnades, Feijoadas, Stifados, Spezzatino di manzo, and Osso Bucco, wherever you are, start stewing! The great winter warmer starts here.There is nothing any more comforting and wonderfully tasting as a big pot of beef stew on a chilly day! I just love it.When it’s starting to get chilly outside, get in the kitchen and turn it into the warm hub of your home.The joy and warmth of a homemade stew wafting around your house is second to none.A good slow-cooked beef in ale stew is a thing of beauty and known to cure all ills, with just a smidgen of fresh thyme and a bayleaf, and perhaps some mushrooms for extra meatiness.Oh dear i´m getting to sound like that person who always says "that probably could have benefited from a mushroom"
There is this thing that happens in English,where brands are so commonplace that they become a common noun or verb:Tupperware,Tagine, Bandaid, YoYo,Hoover,Granola are some examples. So it is with cooking and the French, where the cooking vessel becomes the name of the dish – casserole, poêle and, as in this case, daube, which is a terracotta cooking vessel from Provence.

What distinguishes a traditional daube from a stew is that a daube would be cooked in an earthenware vessel called a daubière, which is shaped in such a way as to inhibit evaporation of the cooking liquid. Cooks would even go so far as to seal the lid of the pot with a paste made of flour and water. Daube was also served in the daubière.
There are many variations on the basic daube recipe, mostly based on the region of France where they originate.
It's possible to replicate the daubière effect using a Dutch oven by placing a piece of parchment paper over the meat while it braises, to help retain the condensation, or use a larger piece of parchment across the whole rim of the pot to produce a tighter seal of the lid.
Chambão de vaca en daube
1kg chambao (shin of beef)
100g plain flour
100ml olive oil
200g  toucinho pancetta or lardon cut into 8 pieces
4 large carrots peeled and cut into large chunks
12 small pearl onions
1 bottle good quality red wine,shiraz for example
1 litre chicken stock
23 fresh bay leaves
2 cinnamon sticks
1/2 bunch thyme
1 vanilla bean
2 all spice berries
2 cloves
1 tsp black peppercorns
1 garlic bulb
1 orange zested
2tsp cornflour
Cut the beef shin into eight large pieces and dust them in the flour.
In a large, deep, heavy-based frying pan over medium heat, brown the beef on all sides in the olive oil. Drain and transfer the meat to a large ovenproof casserole.
Brown the pancetta in the same frying pan. Add it to the casserole, reserving the fat in the frying pan.
Brown the carrot in the frying pan then add it to the casserole.
Brown the onions in the frying pan and add them to the casserole, along with the remaining pancetta fat.
Pour the bottle of wine into the frying pan and cook over high heat until it has reduced to a syrup. Add the stock, bring to the boil and then add the contents of the pan to the casserole.
Preheat the oven to 120°C.
Tie the bay leaves, cinnamon, thyme and vanilla bean into a tight bundle using butcher’s string then add it to the casserole with the remaining spices, garlic bulb and orange zest. Put the lid on the casserole and cook in the oven for 4–5 hours until the beef is gelatinous and just starting to fall apart.
Whisk the cornflour with 1 tablespoon cold water to make a slurry. Stir the slurry into the casserole over low heat until it thickens. Serve the daube in the casserole at the table.
Email Post