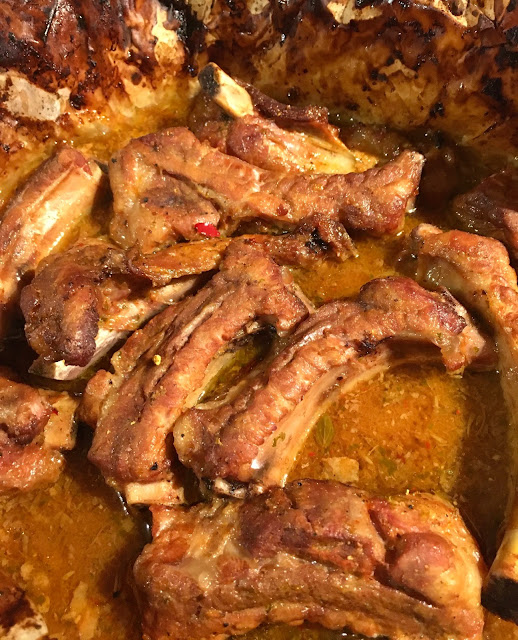 Ostensibly it is not one of nature's great beauties : a pockled, blotchy thick skin encasing a pale, seedy yellow pulp.

The beauty however of a Seville orange (naranja agria)is that it is every bit as appealing as a lemon or a lime, but with a spicy, flowery fragrance like no other citrus fruit can provide. It can adapt to a wide range of cuisines, from savoury to sweet, while at the same time perking them up with an exotic, fruity tang.
While it may seem a surprise to us Europeans, but the sour orange has been used for generations in Latin America and the Caribbean in mojo, the thin cooking sauce of sour orange juice, oil and garlic that is prized for marinating pork but also makes its way into dishes from salad dressings, ceviches and escabeche.Mojo is to Cuba what salsa is to Mexico.
Our restaurateur friends were on holiday in Cuba earlier this year and my curiosity got the better of me. I wanted to see what they might have been eating,and what inspiration they might return with that we would sample on future menus.I have dabbled with many tasty dishes while being on holiday myself.Some have remained culinary romances but many have returned with me and been added to my repertoire.Alfredo, Jansson,Reuben and Victor to name but a few.
I googled Cuban food and a dish jumped out and took my fancy, Costillitas de cerdo Cubanas (baby pork ribs cooked in a sour orange sauce).Now as you well know I am a curious cook and I like to play with my foods! Food ingredients,that is.It came at just the right time of year too.
What a great idea I thought for using up some of those Seville oranges still left on our tree.Researching further how Latin America uses the bitter orange in their cooking I moved south, down Mexico way, to find an embroidered version of the original cuban adobo style.Pork Pibil Riblets (Costillitass de Cerdo al Pibil) conchinita pibil.Well my plan was now focussed to give Seville orange juice a try,as a marinade for pork using this quintessential Latin Amercan cooking method.
Pibil, a Mayan word that means buried or cooked underground, is a word describing a popular dish found in restaurants and in homes all over Mexico’s Yucatan Peninsula.
Pibil (pronounced PEE-beel) is a cooking technique that involves wrapping pork (or another meat) in banana leaves, marinating it in sour orange and achiote—a sweet, slightly peppery red sauce made from annatto seed, a plant found in the tropics—and baking it in a hand-dug barbecue pit in the ground for several hours. The meat becomes beautifully tender, with a subtle smoky flavour.

You may find, like me, that you dont have access to banana leaves and that you aren't up to digging a pit in your backyard and lining it with stones to cook your Cochinita Pibil. So worry no more, for the likes of us there is a solution at hand for both these dilemmas.
Here is an excellent recipe that focuses on the spices and slow-cooking of the pork without using the traditional pit.If you get the herbs and spices right, the banana leaf wrapper will not be a big deal. I don't think the banana leaves do much, if anything, for flavour. It seems to be more for the steaming process. So my suggestion is using parchment paper and aluminium foil to get good results.I initially thought foil, but then was concerned the acids would react with the aluminium during the long cooking time, so my solution was to double wrap first in parchment paper and then in foil. You'll often see this dish garnished with pickled pink onions.Here is the pickled red onion link on my blog.

Season the pork lightly with salt, pepper and garlic powder. Set aside.
In the blender, combine the Seville orange juice and the remaining ingredients for the pibil recado. Blend on high until very smooth. Set aside.
Put awire rack in the bottom of a roasting tin Line a large roasting pan with a double layer of foil followed by sheets of parchment paper overlapping in a criss cross way and large enough to allow wrapping the ribs up in a tight parcel.
Add 2 cups of water to the bottom of pan.
Place the pork riblets on top of the parchment. Pour the pibil recado over the riblets, making sure they are evenly coated. Cover tightly with the parchment and tie tightly with string, then bring the foil up to wrap around the parchment and pull together tightlyRoast in a preheated 180C oven for 3 1/2 hours or until riblets are very tender. Check for water level after 2 hours.
Once pork is tender, unwrap the parcel, leaving it in the roasting pan. Place back in over for 25-30 minutes to further brown and caramelize the riblets.Serve with Mexican rice or Mexican roast potatoes and the pickled onions.
* Also known as recado rojo, this Latin ingredient is used in Mexican and Belizean cuisines, especially of Yucatán and Oaxaca. It gets its red-orange color from the seeds of the achiote tree, which is native to tropical regions in Mexico and Brazil.
If you can't find it in the shops or online, use this easy recipe to make your own stand-in spice blend at home.
2 teaspoons paprika