Chista è ‘na vera Norma! (this is a true Norma!) 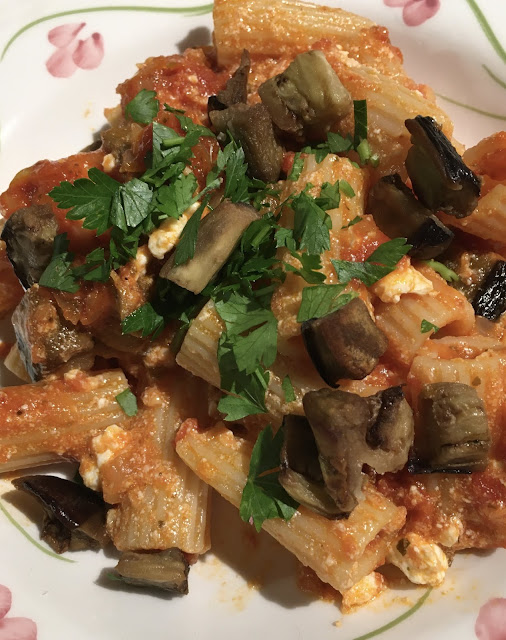 “Pari ‘na Norma,” you look like a Norma, is the most appreciatiive compliment that could be paid by the fellow citizens of the celebrated Italian composer Bellini, the so called Swan of Catania.
Pasta Alla Norma is a traditional Sicilian recipe made with "fried" aubergines, tomato sauce and sprinkled with Ricotta salata ( salted ricotta ).Don´t worry if you can´t get it where you are there are alternatives.
Literally, Norma in Italian is short for Normativa – rules, meaning made within the rules, but the name of the dish has probably a different origin.A well-known comedian from Catania, Nino Martoglio (1870-1921) compared the perfection of this dish ( Chista è ‘na vera Norma! (this is a true Norma! ) to the famous opera from Vincenzo Bellini ) “La Norma” that was premiered in 1831 at the Scala theatre in Milan., and served post performance to the invited guests.
I’ve tried a lot of pasta alla Norma recipes over time, and I have to say, after making this one,I need search no further.This is the only one I’ve tried that roasts the aubergine rather than fries it, and for me, that makes all the difference.As you’re probably well aware, the trick with aubergine is that it absorbs oil like a sponge, and 1/2 cup oil can disappear into one’s pasta sauce only to magically reappear later on one’s waistline,  Not only that, but if aubergine is allowed to soak up oil in this way, the resulting dish just tastes heavy and unbalanced rather than intensely auberginey.My version is lighter. I tried this recipe with beautiful home grown aubergines from Dona Isabel in the local market.She grew them herself and also proffered me one of her home grown cucumbers which she told me was muito doce (very sweet).There on followed a conversation about pickling gherkins but I think I lost her somewhere along the line as my description in Portuguese of bottling a cucumber fell on stony ground.
The dish is simple: pasta—more often penne, sometimes spaghetti—with tomato sauce, silken nuggets of aubergine, aromatic basil and salted ricotta. But, as with all great dishes, the result is so much more than the sum of its parts. Norma is the kiss of Sicilian summer. It’s a composition that sings of seasonality, when tomatoes and eggplant are at their peak, and our terraces and balconies are overrun with aromatic potted basil.

Why Ricotta Salata and not Parmesan?
Parmesan is a cheese from Parma located in the North of Italy, while Pasta alla Norma is a Sicilian dish and therefore it uses a local cheese. Ricotta Salata is salted and aged sheep ricotta.It is not as sweet as Parmesan and slightly more bitter and acidic like Pecorino. It gives a nice contrast to the aubergine

It is unlikely that you will find ricotta salata outside Sicily.Pecorino is the best substitute, but at a pinch feta does the same job.I amalgamated a 1/2 and 1/2
mix of Feta and Requeijao (Portuguese ricotta).Although feta is saltier and tangier, the texture is very similar to Ricotta Salata. If you'd like to stick with an Italian cheese, Pecorino Romano can also be used in place of Ricotta Salata. The Greek cheese Mizithra is also a decent substitute.

Heat the oven to 425°F /220°C / Gas 7
Using a vegetable peeler or a paring knife, peel all or some of the skin from the aubergine in stripes (it can be nice to have some, but not all, of the eggplant skin in the final pasta dish). Cut the aubergine into 1-inch dice and toss it on a rimmed baking sheet with enough olive oil to lightly coat it. Sprinkle with salt. Roast the aubergine until browned and very tender, about 20 minutes. The eggplant is done when you can easily squish a cube with your finger and it has a nice, creamy texture.

Warm a large frying pan over low heat and add the  olive oil. Toss in the garlic and crushed red chilli flakes and stir a bit. add the chopped onion and cook gently until softened.Add the tomatoes and season with salt and pepper to taste.Bring to the boil,lower the heat,cover and simmer for 20 minute.
Remove from the heat and stir in the basil.

Cook the pasta in a large pan of rapidly boiling salted water for 10-12 minutes or until al dente.Reheat the tomato sauce.Drain the pasta thoroughly and add it to the tomato sauce,with half of the roasted aubergines and the pecorino.Toss to mix together,then taste for seasoning.Spoon the pasta and sauce mixture into a large warmed serving dish and top with the remaining roasted aubergine. Toss in the ricotta salata, if using,or your alternative and the parsley. 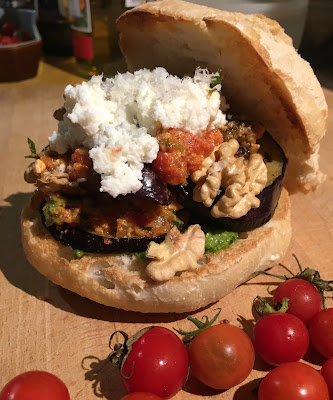 Panini alla norma
As an added bonus I used the same ingredients (minus the pasta!) in a sublime sandwich that does more than justice to its namesake.Traditionally this would  be made with ciabatta but any chewy,crusty bread roll can be used in its place.
FOR ONE PANINI.(repeat as necessary)

Oven baked aubergine slices
1 ciabatta or crusty bread roll,halved
basil pesto spread
coarsely chopped walnuts
1 quantity left over tomato sauce(see above)
moist ricotta salata  (see above)
freshly grated pecorino or parmesan
fresh basil to garnish
Slice the bread in half.Toast lightly to crispen.Spread a generous layer of pesto on the bottom slice of the bread,Layer aubergine slices with the tomato sauce.Sprinkle with chopped walnuts,crumbled ricotta and a grating of pecorino or parmesan.Spread some more pesto on the other slice of bread,Cover and press down lightly.Enjoy.