When in Rome........Cannelini bean cheesecake 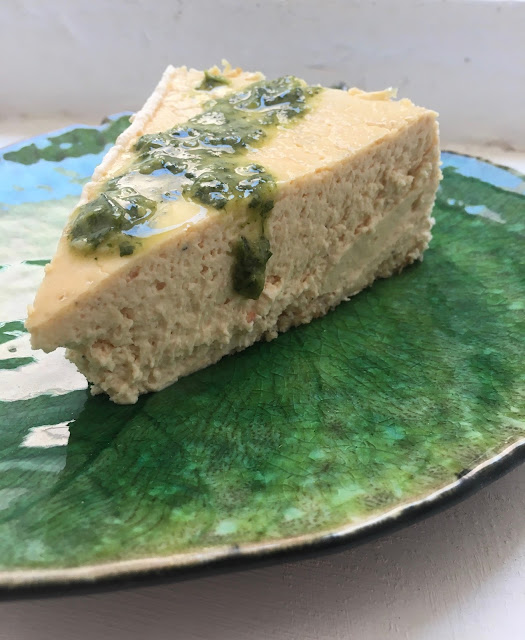 When in Rome do as the Romans do? The inspiring Italian born chef Christina Bowerman does just that.She uses ingredients from traditional Roman cuisine and reinvents them in her own innovative style.Working with old recipes she produces her modern day interpretations.Tucked away in the labyrinth of small streets that prepandemic was the trendy area of Trastevere, you will find her Michelin starred restaurant Glass Hostaria.
I discovered the genius that is Christina through a Televison programme "Rome unpacked" in which art historian Andrew Graham-Dixon and Chef Giorgio Locatelli go in search  of the greatest food and art that they can find off the beaten track, in Rome.
Beans have always been a part of the Roman tradition.They used to say the Roman army would travel "on their stomach",and what they would carry in their packs would be like cicerchia.Cicerchia (Lathyrus sativus) is a legume that was once widely consumed, while nowadays, it is grown only in central Italy.Cicherchia was like wild chickpeas that the soldiers used to carry in their bags with salt and a little bit of flour. They would cook the beans,add things, and make some bread perhaps, so providing sustenance as they were advancing.This recipe would probably come as  very much of a surprise for a Roman soldier nowadays but drawing on his cultural gastronomic heritage I am sure he could conjure up a memory.A word of warning do not embark on this recipe unless you are looking for a challenge and have plenty of spare time.If you do decide to try it it the effort is more than worthwhile.
White bean cheesecake with pasta crumb base
It is almost a scherzo of a cheesecake,a playful jest of what we would traditionally expect from a cheesecake.Are you ready for a savoury cheesecake with a pasta crumb base and a custard of cannelini beans citrus and tahini? This is my interpretation of a Christina Bowerman recipe.For the crumb, she boiled the pasta,dried it, deep fried it, dried it in the oven then crunched it up to make a biscuit base.So instead of biscuits it is pasta.It has a wonderful melt in the mouth mousse like texture that is irresistible to an ever expanding waistline.
Serve dressed with a green tahini dressing.
CRUST
200g spaghetti
1 tbsp (15ml) extra virgin olive oil
1/2 cup (60g) finely ground pasta
( or any other type of savoury crust,Crackers,breadcrumbs etc.)

TO MAKE THE CRUMB

Cook the spaghetti as you normally would following instruction on the packet.
Drain the spaghetti and dry it on a tea towel.When dry deep fry the spaghetti in batches until crisp and golden.Drain on paper towel and then dry in a low temperature oven(150C)
remove from the oven and allow to cool. when cool blitz the pasta in a food processor as you would if making a biscuit base for cheescake, until you have a coarse crumb.

TO MAKE THE WHITE BEAN PURÈE
In the bowl of a food processor add the white beans and garlic; process until smooth.Add the tahini,lemon juice,olive oil, salt and pepper and process again until smooth.remove from the bowl and set aside.

TO MAKE THE CHEESECAKE
Pre-heat the oven to 325F / 170c or gas mark3
In the bowl of an electric mixer,using the paddle attachment,mix the ceam cheese,mascarpone and greek yoghurt until softened,scraping down the sides of the bowl underneath the paddle,and the paddle itself frequently with a rubber spatula,for about a minute.
Add the white bean purée and mix for a further minute,until completely smooth,add the eggs,one at a time,and mix until combined,about 10 seconds after each egg.
Pour the batter over the crust and level it with a small offset spatula.
Take a baking pan that is large enough to hold your springform pan, and is also large enough to allow for water to surround the springform pan. Next, cut a large single sheet of aluminum foil, making sure that it is wide enough to surround all sides of your springform pan.  (Use an extra wide aluminum foil if it is available rather than two narrower pieces of foil to avoid any chance of leaking.)
Wrap the pan, making sure that the sides of the pan are fully covered by the foil.  Also make sure that you don’t tear the foil as you wrap it.
Place your prepared cheesecake in the springform pan into the baking pan.  Then, add about an inch of very hot water to the baking pan so it surrounds the pan.  You want to add enough water to the pan to ensure that the water does not fully evaporate during the baking process.(It should come up halfway around the sides of the pan).Bake for about one hour,until the cheesecake is firm around the edges,but still a little bit jiggly in the middle.remove from the oven and remove the cheesecake from the water bath.gently run a small sharp knife or small spatula carefully around the edges of the pan to loosen the cheesecake from the sides.Allow to cool at room temperature.Place in the fridge for at least eight hours till set completely.
To unmould the cheesecake,gently run a small sharp knife around the edges of the pan.Release the latch on the side of the pan and then lift the ring straight up.Refrigerate until ready to serve.