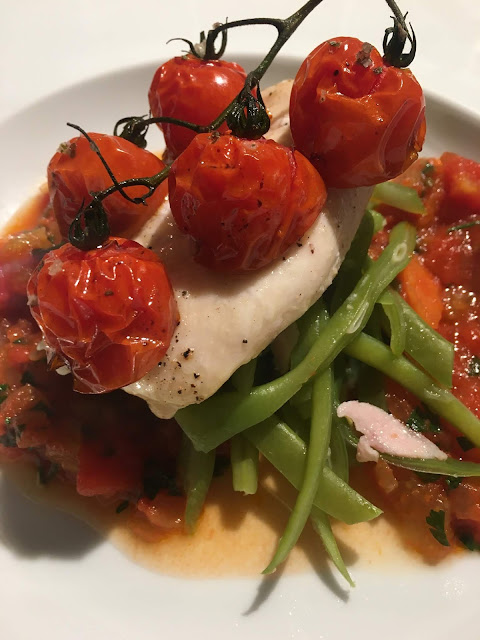 Most "easy" recipes are not easy. Achieving simplicity is never actually that simple, but in the kitchen it is usually also contingent on a well-trained hand and a very well-stocked pantry. This makes the genuinely "easy" recipe a holy grail of sorts.
Stressless cooking likewise is not always about "easy", but about "ease". It is not about a dish but about a state of mind.Things are seldom what they seem.Trying to cook something simple can turn out to be a lot more difficult than one thinks.
When I saw Grace Dent´s review of the Spanish restaurant Pilgrim in Liverpool I was not sure if the dish photographed, (runner beans with sofrito and smoked tomatoes) was a starter, a side dish or even a tapas item.Grace clarified this in her own words "OK, it’s a Spanish restaurant. And some of the stuff is on small plates, so you could even say it’s tapas." Thats fine,Grace, I just needed to know.
I have never attempted the pilgrimage routes towards Santiago de Compostela or, more specifically, the Camino del Norte route, which is 825km of rugged coastline between Irun, outside San Sebastian, turning inland at Ribadeo in the Galician hills to Santiago.I am however savvy enough to know what this restaurant´s food is apparently based on. I am also aware that some of the best food in the world can now be found in this region.
Bearing in mind what a side dish is*, it would make a perfect accompaniment to many of the fish dishes that I serve here at Casa Rosada.

A side dish, sometimes referred to as a side order, side item, or simply a side, is a food item that accompanies the entrée or main course at a meal.• One might best define a side dish in terms of the way it is served for a particular meal, as being:
“A medium-size portion of any primarily vegetable dish (including, for certainty, all grains and starches), which is served on the same plate with, or in a dish alongside, the main dish, that is not intended to be the main dish or a co-equal of the main dish, and, if in a separate dish, is not intended to be some other course, such as an appetizer or a dessert. The serving size of a side dish is larger than that of a mere accent item or condiment.”In other words, the definition of a side dish is primarily based on what the item is intended to be, and is served as, taken in context.

All that aside,sofrito, sofregit, soffritto, or refogado is a sauce used as a base in Spanish, Italian, Portuguese and Latin American cooking. Preparations may vary, but it typically consists of aromatic ingredients cut into small pieces and sauteed or braised in cooking oil.Soffrito is the holy trinity of Italian cooking.Once you have made your soffrito you have the base for the next most important essential in the Italian culinary catechism, a sugo.
The most classic of all tomato sauces, the ‘sugo’ is one that includes chopped up carrot, onion and celery (‘soffritto’) in the tomato sauce (3 parts onion, 2 parts celery and 1 part carrot, that is the rule. I sort of play it by ear and do not care too much if the proportions vary away from the 3-2-1 rule).  Fresh parsley or basil leaves are added towards the end of the cooking time – parsley during the winter months and basil when it is in season during the warmer part of the year.
Soffrito
Put the chopped carrot, celery and onion into a good-sized casserole with plenty of olive oil.

Repeat: plenty of olive oil.  The secret to a good sugo is plenty of olive oil.  More olive oil, in other words, than you would normally think of as ‘enough’.
Turn the heat on at a fairly low temperature (the onions must not brown) and cook for about 6-8 or even 10 minutes — cooking time always depends on the amount (volume) of food in question.When the soffritto has softened sufficiently, it’s time to add the tomato sauce( see below).  Simmer for at least 20 minutes, stirring occasionally.Add the basil leaves towards the end of the cooking time … so that they cook for about at least 5 minutes … and do tear them with your hands or bash them about a little to release their precious scent before putting them in.Add salt and stir and taste.  Add a wee bit of sugar too if you think it needs it – it usually does.
Tomato sauce
1kg red, ripe tomatoes
1 tbsp extra virgin olive oil

12 fresh basil leaves
Cut each tomato in half, put each halve cut side down in a heavy based pan, cover and put on a lively flame. After a couple of minutes, take off the lid a squish the tomatoes with a wooden soon to release some liquid, recover and leave for another 5 minutes. Once the tomatoes are very soft, take them off the heat and pass them through the mouli into a bowl. Back in the heavy pan, warm a tbsp of olive oil and add the tomato passata, allow it to bubble away over a modest flame until it is reduced by half. Season with salt

2 John Dory fillets
12-16 ounces fresh runner beans thinly sliced
1 tsp sea salt
1 tbl smoked paprika
I section cherry tomatoes on the vine per portion
3 tbs olive oil
splash of balsamic
Sea Salt/Pepper  (to taste)
¼ cup warm bacon drippings
Put cleaned green beans in a heavy pot on high heat.  Cover with water.  Add salt and paprika.  Bring to boil and cook about 9-10 minutes.  Drain beans reserving about ¼ cup of the liquid. Have a large bowl of ice cold water ready (ice cubes in with water).  Immediately  put the beans in the ice water to stop cooking process and maintain brilliant green colour.
Preheat oven to 400. Put tomatoes in a roasting tray, coat/toss with olive oil, salt balsamic and pepper. Cook in a hot oven for about 12 minutes or until they begin to char.  Remove and keep warm till ready to serve.

Line a baking tray with greaseproof paper and lay the John Dory on top.


Drizzle with the olive oil, season and roast in the oven for 5 to 6 minutes.
When ready to serve, return the beans to the pan and heat through with bacon drippings on top.
Make a ladleful of tomato sauce in the bottom of a dinner size soup plate followed by a layer of green beans.Lay the John dory fillet on top and finish with a section of roasted vine tomatoes.