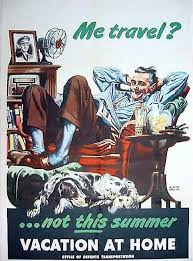 January used to be the month when low or "unbeatable" prices were flagged up for winter breaks, and glossy travel brochures lured you with tempting exotic beach holidays on "faraway shores" with the promise of sunnier climes. Northern Europe used to populate their airports like migrating geese flying south for a bit of sun. . . not so much anymore. Until the hold on our physical travels has been lifted, we’ll be combining three of our greatest loves, reading, gastronomy and travel, and living vicariously through our favourite foodie books with a curiosity and sense of adventure. Restrictions aside, we still need to eat, and even more, we still need to dream. Thanks to the coronavirus and COVID-19, it’s going to be a while before we can get on that plane to enjoy sunshine and delve deep into the reality of a more distant local cuisine. Most of the world’s great restaurants are responsibly closed right now. So to help us live well as we stay at home, we are bound by armchair travel and getting the taste for another country´s food without venturing very far, let’s call it stovetop travel in this instance shall we? January flights these days are flights of fancy where one tucks not into an inflight meal but the aspiration of bringing different countries´ foods a little closer to us. Thankfully, there is hope on the horizon that we will travel again. "Are you sitting comfortably? Then we'll begin"
In the dark days of a bleak winter, Elizabeth David began writing her first book, about Mediterranean food. The timing should have been wrong. People enduring post-war rationing would rather not think about sunlit shores and dishes of bright food, surely? But oh, how depressed, broke Britain lapped up A Book of Mediterranean Food when it was published in 1950. David’s prose and recipes ‘flew’ readers to Greece, Italy, the south of France and Egypt, stirring up an appetite for garlicky seafood stews, saffron-suffused pilaffs and artichokes dipped in anchoiade. In an echo, 70 years on, I have found my thoughts wandering to places that currently cannot be visited except via their dishes. Suggestive cookbooks still bring the sun’s rays to our table without the need for breaking quarantine. In 2020 we have seen see many of our much loved chefs like Ottolenghi, Angela Hartnett and Tom Kerridge, restaurateurs and owners of successful cafés and food businesses, warning of how Covid would bring mass unemployment and bankruptcy to the UK’s hospitality sector. At first I raised an eyebrow in disbelief, thinking how extraordinary this could be. Seventy years ago Britain was useless at restaurants. Elizabeth David probably only knew of one decent trattoria in Soho. Now they are brilliant at them, and there is a macabre threat to the industry’s existence, leaving a nasty taste in the mouth. One book, instantly transports me to sunny shores. 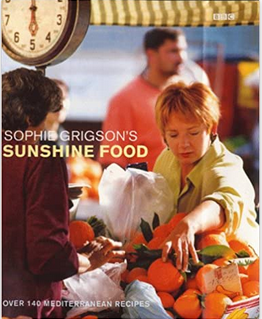 Sophie Grigson captures the essence of holidays spent in the sun by bringing the very best flavours and ingredients of the Mediterranean into our own kitchens. Sophie Grigson's love of the Mediterranean, nurtured by many years of travel around its shores, shines through the many personal anecdotes and reminiscences in Sunshine Food. In her introduction she pays tribute to the allure of the great southern sea: "The magic begins as we step off the plane or train, to be bathed in warmth and that extraordinary, glittering, crystal light." No mention of the horrors of the mistral here. We are on summer holiday, eating in wonderful traditional restaurants, shopping in the abundant food markets, enjoying our aperitif in the shaded square of an unspoilt hill town or at a bar on the piccola marina. When you are  stuck in the rut of a pandemic, this is THE book to shake you up and remind you what Summer tastes like.
You don't need to have been travelling to the places which La Grigson mentions to appreciate the foods, and in fact if you haven't this might give you just the kick start you need, to set off on your own tour of the Med. When you can.....Until then here is one of my much repeated recipes from her book. As usual a bit of artistic culinary licence here, I have embellished and composed by entwining some inspiration from two different recipes togethe,r and chucked a sausage at it. Its a bit like South African grapes grown by a man who lays claim to having borrowed a lawnmower from Nelson Mandela. The pure Grigson bit is the beans, the addition of a creamy burrata topping was inspired by an idea of Nigel Slater´s and my idea was to chuck a home made sausage at it. Hey ho, out pops a plate that  Americans would call "composed" 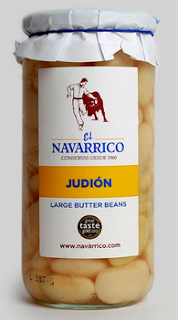 Fagioli All'uccelletto  (beans in a tomato and sage sauce) pictured above
"Judion" are what you neeed here.These white "Judion" fat ,flat butter beans - also known as garrofo or garrofón - are called the "Rolls Royce" of beans, and have a silky smooth, unctuous creamy texture, with a mild mineral taste. Hailing from Navarra in Northern Spain, bordering the Basque country, they are a popular ingredient in pinxtos or eaten as part of a main meal. The beans are sorted by hand to select only the highest quality Judion beans.

Drain the soaked beans,if using,then place in apan with enough water to cover generously.Don´t add any salt,Bring to a boil, then boil hard for 10 minutes.Reduce the heat and simmer gently until tender, anything from 40 minutes to 11/2 hours depending on the age of the beans,adding more water if needed. Drain.Fry the garlic and sage leaves gently in the oil.When the garlic is golden,add the beans and season generously.Add the sieved tomatoes ,or passata,and the tomato purée, and about 1 teaspoon of caster sugar,if necessary.Simmer gently for a further 20 minutes or so, stirring occasionally to prevent catching. Check and adjust the seasoning just before serving.Transfer portions of the beans to soup platesad twoo cooked sausages per portion and finish by breaking a ball of burrata in two and place on each mound of  beans. Trickle with olive oil and serve. Enough for 2 with beans left over. 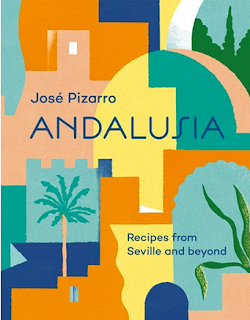 Jose Pizarro´s Andalusia: Recipes from Seville and beyond… is all about the simple pleasures: a glass of wine or sherry, a piece of cheese or ham, and good company. And that's all you need to make yourself happy. It's all about the freshness, the quality and the diversity of the produce.Andalusia is a food-lovers paradise, and award-winning chef José Pizarro takes us on a journey through it's most delicious dishes.Talking of eggs sunny side up, what this man does with an egg will put a smile on anyone´s plate. Whether it is his witty take on tortilla with asparagus, or Artichokes, jamón Ibérico & egg yolk these are both what we most need right now.

'A fantastic and heartfelt book, full of recipes that make you feel like Spain should be your home.' Tom Kerridge

Andalusia is a place where the past and modernity blend together to form a rather magical destination. From sandy beaches to amazing architecture, buzzing tapas bars and flamenco dancers, it's full of passion.Many of the dishes go back to Moorish times - or earlier - and each of the eight provinces has their own special dish. Dont be put off  this is genuine, bold-tasting Spanish food,it is easily re-created at home. 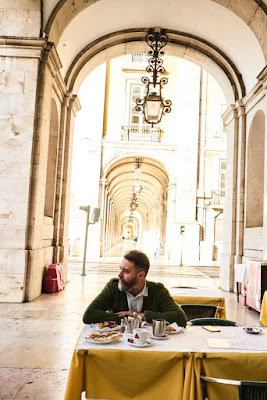 The sun may not always be shining in Lisbon but  Lisboeta: Recipes From Portugal’s City of Light, Nuno Mendes brings warming rays to flat and dark January days, when it can be hard to do anything else but hunker down. Nuno Mendes, one of the most-admired Portuguese chefs in the world, made his name in London with restaurants such as Viajante and Chiltern Firehouse. So it was a big deal when he returned to Lisbon  to oversee food and beverage at the Bairro Alto Hotel.Before that, it was a big deal when he released Lisboeta, a book that pays homage to his birthplace, with references to his family’s farm in the Alentejo. The recipes—inspired by dishes that Mendes loves—take cooks through a typical day in Portugal’s City of Light, from the famous pasteis de nata (custard tarts), to lunchtime seafood such as squid sizzling in a pan or grilled sardines with roasted green peppers, to hearty dinners like lamb stew and marinated pork with black olives and parsley, and even a simple prego (steak sandwich) for a late-night snack. 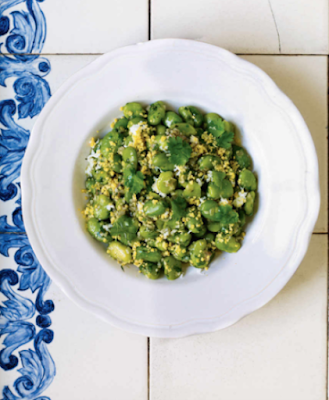 I have not tried even half of the recipes , but I do love favas and feijao verde the ‘Runner bean fritters with clam broth’ – beans, tempura-style, with garlic, lemon, and coriander – the ‘Coriander-marinated broad beans’ with egg – and the ‘Peas and broad beans with cornbread crumbs.’ All three are so simple, and so delicious.I want to try the fish soup or grilled sardines next.

Spinning the virtual globe to another well-lit and sunny but further afield location, Bill Granger’s Australian Food celebrates the all-day-café cooking he made famous. ‘What even is Australian food? Healthy, hipster and possibly toast with a smashed
avocado on top?’ asks Granger, who is credited for inventing the brunch special.A meal synonymous with Australia's laidback lifestyle and lack of housing affordability has become one of the most influential dishes in the world. 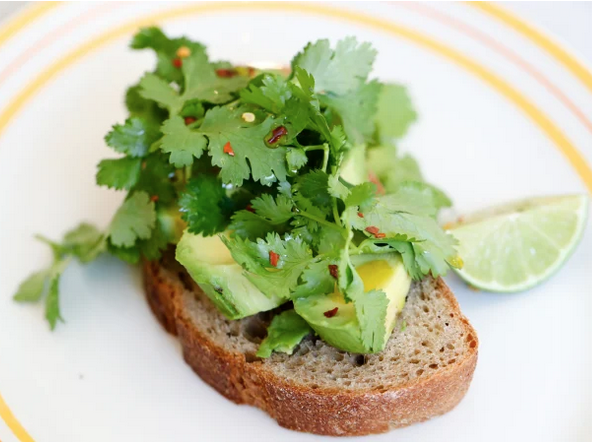 Bill Granger's avocado toast is featured alongside dishes concocted by world-famous chefs such as Ferran Adria, Alain Ducasse, Rene Redzepi and Heston Blumental.
It is a new cuisine, certainly. The old one went unnoticed; Granger says most people imagined his country’s traditional cooking was probably ‘like British food, only worse’. Well, now it’s all pretty bowls packed with fused flavours from almost anywhere. And, like Granger himself, it is so amiable and sunny it is impossible not to yearn for ricotta hotcakes with honeycomb butter and banana. Or a salad dressed with peanut and lime to go beside grilled chilli miso salmon with hot and sour aubergines. Recipes that were very innovative once may be classics now, but Granger’s book, brings a little bit of Ozzie warmth to our quarantined tables.