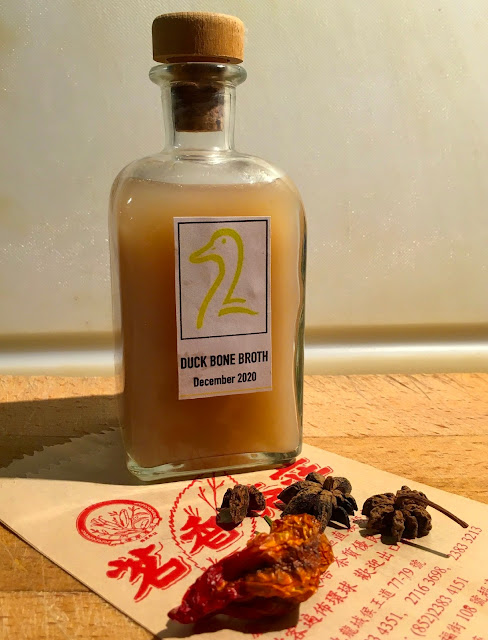 Some recipes are called " Keepers". They are the ones you bookmark, the ones that stick around year after year and become part of our cooking identities.They are perhaps passed down from generation to generation and we repeatedly cook them. This is one of them, one of my all time favourite dishes, Portuguese  Duck Rice. Judging by the response it got when I posted my interpretation of the dish almost nine years ago in March 2012, many liked it so much they sent it to the number one spot in my all time blog ratings where it has stayed ever since. Not having made it at home for a while and over 7,000 views later I myself returned to the dish to take stock, or more appropriately take account of the broth one should use. Portugal may be famous for dishes like Bacalhau a Bras and Caldo Verde as well as for desserts like Pasteis de Nata. However, Arroz de Pato may be the coastal European nation’s greatest contribution to the food world. Arroz de Pato was invented in Portugal’s northern city of Braga, but the savoury duck and rice concoction is one of the most popular dishes in the entire country. Locals typically eat Arroz de Pato at home on Sundays or for special occasions, mainly Christmas and New year. In times like these every day should be made to feel like a special occasion, so I think this dish should be served more often. The Portuguese food favourite can also be found on restaurant menus throughout the slender Iberian nation.
The duck is cooked in a broth, then the flesh is removed and shredded. The duck stock is used to make the rice, which gives it its exceptionally rich taste. It’s then layered, normally in a glazed terracotta deep baking tray, garnished with Chourizo slices on top and finished in the oven. It’s brilliant to serve for a big party and it’s also easy because you can make it up to 2 days ahead and just finish it off when your guests are about to arrive. The duck flavour is wonderful, but the melted chourizo on top and the resulting top crispy rice layer are what I have always felt lets it down. In my version I integrate the chouriço into the rice with the duck and when finishing it in the oven I keep it covered with foil to retain the moisture, therefore eliminating its traditional crust which I have never been keen on. It’s a flexible recipe and like so many rice dishes ,very forgiving .It is also a great dish if you have leftovers as this household did after our roast duck Christmas dinner. As I said the duck is traditionally cooked in a broth and this is the secret of why it is such an iconic dish. Stock and broth are not technically the same thing. Stock should be made with mostly bones and scraps; its high gelatine content will give body to sauces. Broth, on the other hand, should be made from meaty bones with a high meat-to-bone ratio, its pronounced, meaty flavour is perfect for this dish. Unlike stock, broth is typically seasoned. It finishes as a thin, flavoursome liquid that does not gel when chilled, and is used in all the same ways you’d use stock, including soups, sauces, and braises. And since it’s seasoned, it is flavour has a deliciousness when sipped on its own.
When it comes to stock, sadly, a lot of us think of tin cans or waxy boxes. From their shiny, happy faces, the packages shout “All-Natural,” “Lower Sodium,” Rich-Tasting.” But then you take a sip and the truth is revealed. To be fair, some are, indeed, lower-sodium when compared with their saltier counterparts. But the murky liquid inside is a flatliner, one with not a pulse of flavour, despite being riddled with multi syllabled ingredients that one cant even pronounce. Ingredients that sound as if they belong in a car lubricant. Shame, shame on us. It doesn’t have to be that way. Homemade broth, simmered for hours with as much meat and as many bones as you can cram into the pot, isn’t only trés facile to make, it’s a thing of beauty, filling the house with the unmistakable scent of nostalgia. Standing in front of that burbling pot, the steam opening your pores and filling them with its animal essence, you have a sense of purpose.Y ou feel worthy like one of those earnest people in wartime posters, soup ladle or pitchfork in hand, ready to defeat the enemy, return from the fields and be back at the table in time for "Here's your beef tea, Derek". 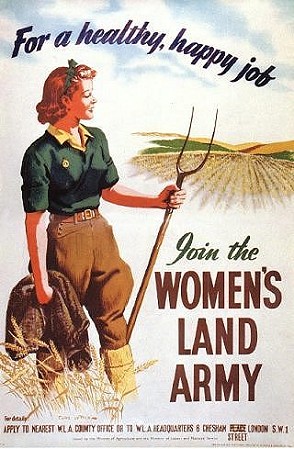 Although the Portuguese have been eating rice since Moorish settlers introduced the starchy crop to Portugal more than 1,000 years ago, historians typically attribute duck rice to China. Other countries like Singapore, Taiwan Indonesia and Thailand also eat versions of duck rice in their local cuisines.
In a good Arroz de Pato, duck, rice and a host of aromatic flavour elements share the food stage in beautiful, heavenly unison. This hearty dish, featuring savoury, shredded duck, chunks of smokey bacon, fatty chouriço and broth infused rice, is Portugal’s answer to global rice dishes like New Orleans Jambalaya, Spanish Paella and Chinese Fried Rice. The dish, which synthesizes all of its disparate ingredients into a harmonious whole, may even evoke some versions of risotto but without the Italian dish’s starchy sauciness. The starch in Arroz de Pato is more of a polymer-like building block in the dish than the star of the show. My version of the recipe veers towards these more global influences by the inclusion of Cantonese style spices for flavour and the influence of Italian risotto in the way I cook it. 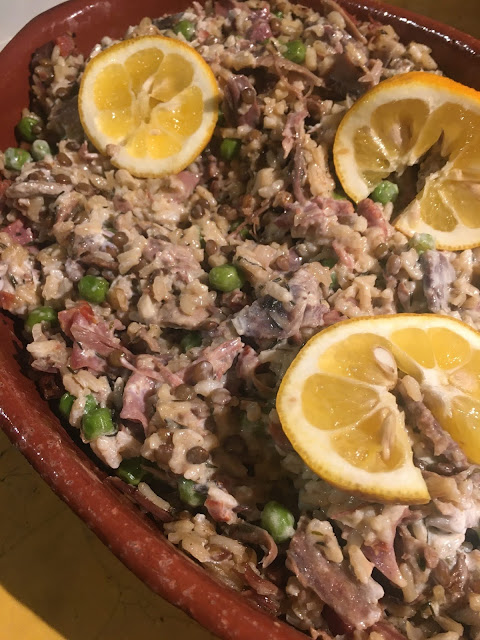 Place the duck in a roomy pot and add the stock,madeira herbs and spices. If the liquid does not cover the duck completely add a little water. Season with salt and pepper. Cook until just tender 1-1.5 hours.Take care not to overcook the duck. Meanwhile sauté the cured meats and set aside.Wilt the drained spinach in a pan and set aside.
Drain the meat and allow the stock to cool completely. When cool skim off the excess fat with a spoon and discard.Shred the duck meat and set aside.
Heat the butter and olive oil in a large shallow pan.gently fry the the shallots,garlic and parsley stalks until the shallots are softened but not browned.Stir in the rice and toss to coat completely. Gradually add the stock to the rice (21/2 times its volume) in stages.when half cooked (12-15 minutes) Stir in the reserved duck, presunto, chouriço and bacon.Add 2 tablespoons butter.Transfer to an ovenproof pan covered and finish cooking in the oven.
Remove from the oven and stir in the  yoghurt with a wooden spoon.Transfer to a large dish and  put in the middle of the table for people to help themselves.