Kate and Sydney make a comeback 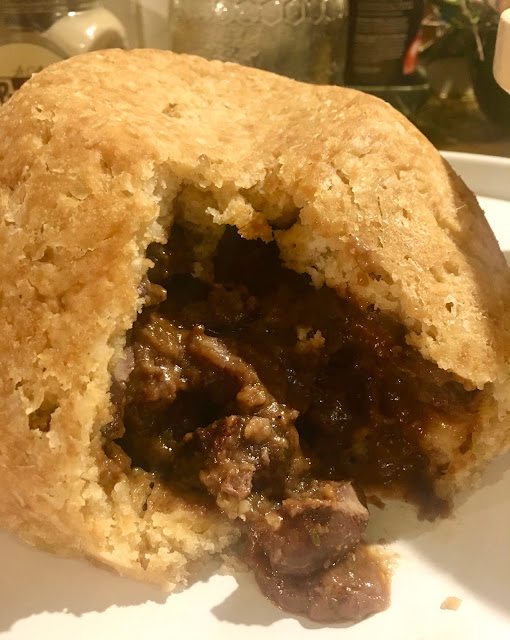 Having been lost in the Mediterranean these last couple of weeks its time to return to the land where I was born for a bit of expat craving and another trip down Grandmothers row. For this one, it's certainly time for a revival in my book, because it has been shamefully neglected and because it really is the ultimate in comfort food. No retrospective from me would be complete without a paean of praise for the steak and kidney pudding, because I am emotionally attached to it. I think it is because of its sheer Englishness.
Home-made is a far superior thing to any factory version. It might be imagined that it’s difficult to make. Not so. I would say it takes about 40 minutes to prepare and assemble, then it steams away for several hours needing little more than a top up of boiling water.  Once it's on the heat, you can forget all about it till suppertime – except for the amazingly appetising wafts coming from the hob. Good things come to those who wait – or at least they do here. This takes a lot of time, but much of that is entirely hands off, while the filling bubbles away on the stovetop. Although steak and kidney pudding has a lovely juicy filling, it's always nice to have a little extra gravy – and since there are always some meat trimmings over, a good way to use them is to make steak and kidney gravy.
In London’s east end, where there is a tradition of good eating, good butchers and good meat, cockney slang affectionately referred to it as Kate and Sidney. In contrast, across the social divide up west, within the dining rooms of exclusive gentlemen’s clubs, the pudding would be regally served on a silver platter with a starched linen napkin wrapped around it. A knife would then be inserted and slices of the soft pudding crust were served with the luscious steaming contents spooned over. One thing’s for sure – there are not many contemporary eating experiences quite like it; the whole ritual of making and eating it is both unique and immensely pleasurable.
A double-crust soft suet pastry case filled with beef chunks and kidney pieces in gravy, steamed, whats not to like? "I said kiddillies, diddle I?"

You can either serve the pudding by spooning portions straight out of the bowl, or slide a palette knife round the edge and turn the whole thing out on to a serving plate (which is more fun!).

Rinse the kidneys and pat dry with kitchen paper. Cut the kidneys, in half, snip out the white cores and cut the kidneys into roughly 1.5cm/¾in pieces.
Place the cubes of steak into a large, strong plastic bag and the kidney pieces into another bag. Divide the flour between the two bags, then season, to taste, with salt and freshly ground black pepper. Tie the ends of the bags and shake until the steak and kidneys are thoroughly coated in the seasoned flour.
Heat two tablespoons of the oil in a large non-stick frying pan and fry the steak, in batches, over a medium heat, adding extra oil as needed, until the steak is well-browned all over. Remove the steak from the frying pan with a slotted spoon and transfer to a flameproof casserole.
Return the frying pan to the heat and repeat the process with the kidneys, frying on both sides until well-browned. Remove the kidneys from the frying pan with a slotted spoon and transfer to the casserole.
Return the frying pan to the heat, add the remaining oil, then add the onion. Cook the onion over a low heat, stirring often, for five minutes, or until softened. Stir the cooked onion into the casserole with the beef and kidneys.
Deglaze the frying pan with the wine, bringing it to the boil while stirring to lift all the browned bits from the bottom of the pan. Pour the mixture immediately over the beef, kidneys and onion.
Strip the thyme leaves from the stalks and add them to the casserole. Stir in the bay leaf, beef stock and tomato purée.
Bring the beef mixture to the boil. Remove three ladlefuls of the sauce for gravy and set aside in a small pan to cool. When cooled, set it aside in the fridge for use as gravy.
Cover the casserole and transfer to the oven to cook for 1½-2 hours, or until the beef is tender (stir the mixture halfway through cooking).
Return the casserole to the hob and simmer the mixture for 2-3 minutes, or until the sauce is thick enough to coat the back of a spoon. When the sauce is thick enough, remove from the heat and leave to cool.
Meanwhile, for the suet pastry, put the flour, suet and salt into a large bowl and mix until well combined.
Stir in enough water to make a soft dough - you'll probably need around 300ml/10½fl oz of water. Turn out the dough onto a floured surface and bring it together to form a ball. Knead the dough lightly, then remove a generous quarter of the dough to make a lid for the pudding and set aside. Roll out the remaining pastry into a rough 5cm/10in circle (the size of an average dinner plate). It should be about 1cm/¼in thick.
Butter a 1.5 litre/2 pint 12¾fl oz pudding basin and line it with the pastry. The pastry should reach 1cm/¼in above the top of the dish. Press the pastry against the sides of the basin and trim neatly.
Spoon the steak and kidney mixture into the pastry-lined pudding basin. Brush the rim of the pastry with water. Roll the remaining pastry into a circle just large enough to sit on top of the pudding dish and place it over the filling. Trim into place and press the edges together well to seal.
Cover the dish with a large circle of baking parchment, with a pleat in the middle to allow for expansion. Cover the parchment with a circle of aluminium foil, again with a pleat. Secure both covers tightly with string. Create a carrying handle by tying the excess string across the top of the basin - this will help you lift the pudding out of the pan after it's cooked.
Place the pudding onto an upturned saucer or small trivet in a large, deep saucepan and add enough just-boiled water to come halfway up the sides of the basin. Cover the pan with a tight-fitting lid and place on the hob over a medium heat. Steam the pudding in simmering water for 2½ hours, adding more water as necessary.
When the pudding is cooked through, turn off the heat and carefully lift the basin from the water. Let the pudding stand for five minutes.
Heat the reserved gravy on the hob, stirring, until the gravy is bubbling and heated through. Strain through a small sieve into a warmed jug.
Cut the string, foil and paper off the pudding basin. Run a blunt-ended knife around the inside of the pudding basin to loosen the sides of the pudding and invert it onto a deep plate. Serve in generous wedges with hot gravy.
Email Post