Memories of a childhood fish cake 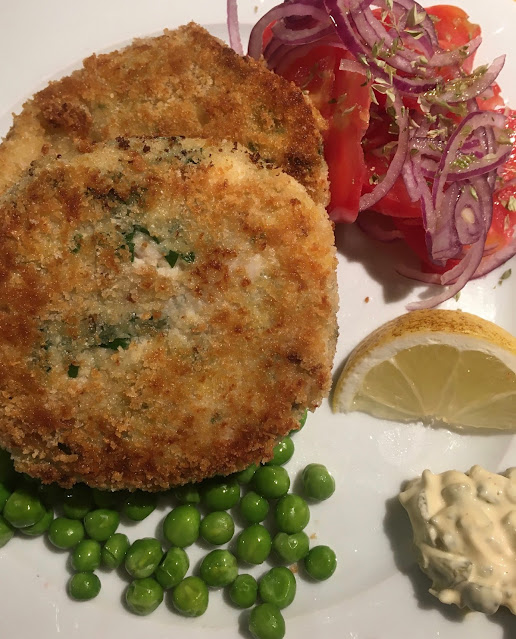 Ive reached that age where recollecting the past is a good thing, happy memories of less hard times well spent come flooding back. Childhood food memories are cherished for ever and when we talk about those foods, one of the delights that can’t be ignored is I think the fish cake. For years now I have been on a mission to source the perfect interpretation of the fish cake of my formative years. I stumbled on this classic recipe. It almost matches in every way, look, taste and texture, that fish cake I remember my mother ordering for me when I was taken as a treat to meet that favourite aunt over a department store lunch at John Lewis. Those were the days a whole generation will have no reference to. I wonder who else has memories of a favourite childhood treat. Saveloy, Fish pie, Macaroni cheese, Sticky toffee pudding?
I always wonder what to Serve with Fish Cakes
Fish cakes are incredibly tasty deep-fried treats made from your favourite white fish. Whether it’s cod, sea bass, haddock, or trout, fish cakes have an amazing crisp on the outside, tender, flaky, and moist on the inside quality that even non-fish fans will enjoy.
These scrumptious patties are so easy to make and are affordable to boot. Since they’re
budget-friendly, you can serve them with a bunch of sides to round out the meal.
You’ll want to pick sides that complement the flavour and texture of your fish cakes.
Peas,tartare sauce or a fresh salad maybe.
Tartare Sauce
The most obvious yet most perfect partnership. Fish cakes won’t be nearly as good without a dipping sauce – and tartar sauce is the best of them all. You can’t go wrong with this good old-fashioned classic – it goes well not just with fish cakes, but with other deep-fried dishes, too. Plus, it’s so easy to whip up: just combine mayonnaise, sour cream, gherkins, Dijon mustard, garlic, parsley, capers, onion powder, pepper, and lemon juice.

For the fish cake

Mix together 125ml mayonnaise, 1 rounded tbsp roughly chopped capers, 1 rounded tsp creamed horseradish, 1 rounded tsp Dijon mustard, 1 small very finley chopped shallot and 1 tsp finely chopped flatleaf parsley. Set aside.
Lay 450g skinned Icelandic cod or haddock fillet and 2 bay leaves in a frying pan. Pour over 150ml milk and 150ml water.
Cover, bring to a boil, then lower the heat and simmer for 4 mins. Take off the heat and let stand, covered, for 10 mins to gently finish cooking the fish.
Meanwhile, peel and chop 350g Maris Piper potatoes into even-sized chunks. Put them in a saucepan and just cover with boiling water. Add a pinch of salt, bring back to the boil and simmer for 10 mins or until tender, but not broken u
Lift the fish out of the milk with a slotted spoon and put on a plate to cool. Drain the potatoes in a colander and leave for a min or two.
Tip the potatoes back into the hot pan on the lowest heat you can and let them dry out for 1 min, mashing them with a fork and stirring so they don't stick. You should have a light, dry fluffy mash.
Take off the heat and beat in 1 rounded tbsp of the sauce, then ½ tsp lemon zest, 1 tbsp chopped flatleaf parsley and 1 tbsp snipped chives.
Season well with salt and pepper. The potato should have a good flavour, so taste and adjust to suit.
Drain off liquid from the fish, grind some pepper over it, then flake it into big chunks into the pan of potatoes.
Using your hands, gently lift the fish and potatoes together so they just mix. You'll only need a couple of turns, or the fish will break up too much. Put to one side and cool.
Beat 1 egg on a large plate and lightly flour a board. Spread 85g fresh white breadcrumbs on a baking sheet. Divide the fish cake mixture into four.
On the floured board, and with floured hands, carefully shape into four cakes, about 2.5cm thick. One by one, sit each cake in the egg, and brush over the top and sides so it is completely coated.
Sit the cakes on the crumbs, patting the crumbs on the sides and tops so they are lightly covered. Transfer to a plate, cover and chill for 30 mins (or up to a day ahead).
Heat 3-4 tbsp vegetable or sunflower oil in a large frying pan. To test when ready, drop a piece of the dry breadcrumbs in - if it sizzles and quickly turns golden brown, it is ready to use.
Fry the fish cakes over a medium heat for about 5 mins on each side or until crisp and golden. Serve with the rest of the sauce (squeeze in a little lemon to taste), lemon wedges for squeezing over and watercress.
Email Post