Simply the best. Out and proud, and at last in a restaurant 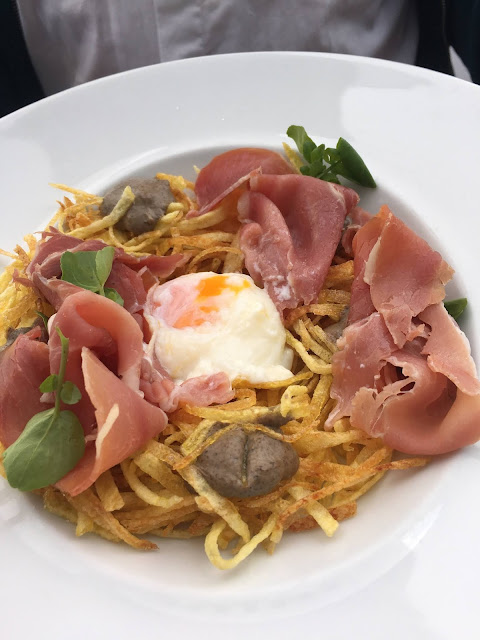 Beyond Expectation
Os “Nossos Ovos Rotos” Aromatizados com Azeite Trufado (Ovo a Baixa Temperatura, Batata Palha, Presunto e Creme de Cogumelos)
“Our Scrambled Eggs” Flavoured with Truffled Olive Oil (Low Temperature Egg, Shoestring Potatoes, Prosciutto and cream of mushroom)
Yesterday felt like the first day of the rest of our life. There we were out in a restaurant for the first time since December 2020. I can not begin to share with you the emotions I felt. There aren´t enough adjectives to describe those feelings. The delight, the exhilaration, the joy. The happiness was straightforward, born of relief. Quite surprisingly I find myself not in my pyjamas or trackie bottoms at midday.Instead I have reclaimed a best shirt from the closet, donned a pressed pair of trousers and donning a fresh haircut just proved to myself I can scrub up well when I try. The "light-at-the-end-of-the-tunnel feeling" of the last few weeks has been driven more and more by an eagerness to get out. Made yet more exasperating by not even having had the relief of a takeaway throughout both lockdowns. 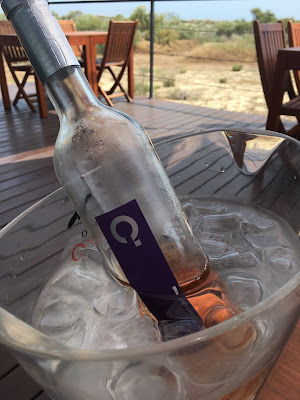 After four months I felt a tad rusty too as a diner. I had to double check myself that I was ready to  remember the protocols and etiquette of what eating in a restaurant required.That said, my glee in dining out again overrode any of that.
Something so simple that one would normally take for granted suddenly reaches epic proportions. It is  something I have been looking forward to during the many months of deprivation marked by restriction of movement. Its like one would imagine the freedom your dog feels when it is let off its leash. Once the tag is released we are reminded very quickly of why we are there.
Restaurants are complex environments, engaging all our senses. More or less their designable sound sources, such as background music, voices, and kitchen noises, influence our overall perception.
The deafening crash of some cutlery slippping from a tray as a table is too hurriedly cleared. The chatter of chefs in the kitchen, staff on a smoking break round the back, the hum of the extractor fan. The appetising aromas wafting from the kitchen. Fresh market vegetables roasting or a steaming pot of fish broth coming to a simmer. The hubbub, the conversation, the constant swinging to and fro of the saloon doors dividing  refeitório from kitchen, as waiters and waitresses sweep past each other with plates of food.
Restaurants are known as places of socializing with friends and family, where one can have meals, and relax over a glass or two. Restaurants are of different types, varying in their services and appearances, including varieties of main chef’s cuisines. I remind myself that the environment in restaurants is usually seen to be related to their locations, in this case seaside and the kind of gentry that frequents it. 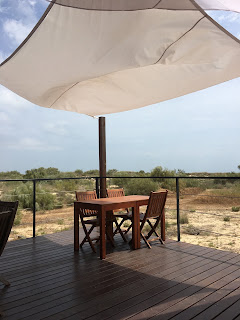 Surprisingly enough, some people look at restaurants as places to go and have a nice and quiet time on their own. This is neither the time or place for that. We have been fully satiated with the sounds of silence for too long now. There is so much I have almost forgotten.
Everything that goes on in restaurants creates a cheerful atmosphere, which people sometimes prefer to their homes. While sitting in a dining hall, you get to hear many different sounds that tend to influence your reactions in certain ways. The music being played in the background can influence your mood. There are various other sounds such as the sound of the person next to you stirring a spoon in a coffee cup, the pop of a cork, water pouring into a glass, plates clattering and the sound of the till drawer snapping shut.
We have a menu in our hands, a menu we have just a few days previously translated for  our friends the owners. This one, with some modifications and enticing new additions to whet our appetite and influence us with what may well become a new favourite perhaps. Nevertheless we are reassured that the samosas, the octopus, the tuna loin, the aged ribeye steak and the strawberry tiramisu are still part of the menu. 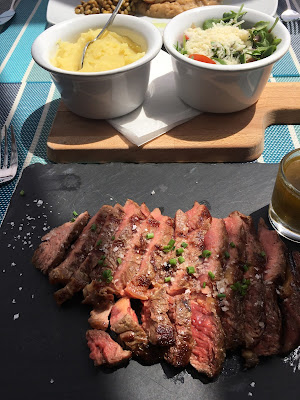 And now about the food.The absolute joy of receiving a plate of food that you have not had to sweat over a hot stove to achieve, a plate of food prepared by someone else other than yours truly. We both ordered the Ovos Rotos ( pictured top ) the dish I had been anticipating for some weeks now. The sound of the dish when I was making the translation just said "me." The reality when it came yesterday proved me right but way exceeded that expectation. Life is too short to cook a low temperature egg at home and I wouldn´t know where to begin but this is a dish that shows why we bother to lose our trackie bottoms in favour of trousers with zips, get in the car and leave the house to eat out at all.
The Thespian was well happy with his choice to follow, the veritable ribeye steak and I took the plunge and ordered another innovation to the menu the triumphant grilled grouper fillet .Not to be put off by the rather beige range of colours on the plate, the flavour combinations brought me feelings of  rapture and promoted my favourite fish up through the ranks.
The glee we felt at dining out post-lockdown was probably composed mainly of gratitude: gratitude toward the staff for trying, and gratitude especially for the essence of hospitality that’s at the heart of restaurants and the experience they dish up.Thank you all the team at Cha com agua salgada once again for your hospitality and transforming anticipation into reality. Simply the best.
Email Post