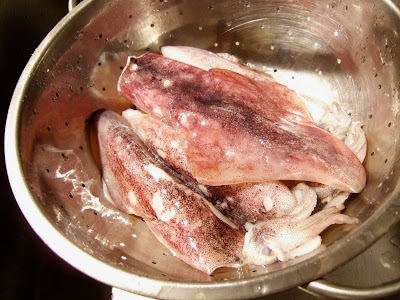 There are a heck of a lot of cephalopods in the local fish market at the moment!!! - and at extremely good prices. Squid in particular is becoming harder to get due to overfishing. So when one sees Squid, Octopus and my latest discovery Potas, one snaps it up.
Pota is of the squid family, a larger squid, but commanding a much more
affordable place on the fish stall.It has a high protein content and huge versatility when cooking, from ceviche to pota ragout with chili to name but two ways with Pota.
I always get the peixeiro ( fishmonger) to clean the octopus for me, but the squid I always clean myself and then freeze it before cooking, to tenderize it. This replaces the old practice of beating it against the rocks. As Freda said to Barry "Not bleakly, not meekly beat me on the bottom with a womans weekly." Sardines are another victim of over fishing. In the winter months small sardinhas are found in the market. They are being caught faster than they can reproduce.They are being fattened for spawning between May and October and should not be fished for outside of these months. Enough of the sustainable fishing rant, I feel a recipe coming on.

Peel the outer leaves of your lemongrass and discard. Chop the lemongrass very finely and put in a mixing bowl.
Chop the spring onions and the chillies, getting rid of the seeds. Mix in the coriander leaves, fish sauce, sugar and lime juice. chop the fish into rough chunks then toss it in the dressing. Season with salt and pepper and serve on a pile of rocket.