The more the feria 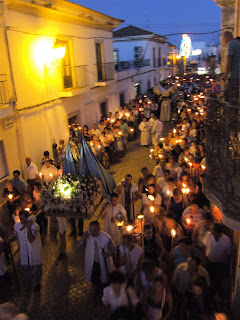 Portugal is in the middle of all its big summer holidays and festivals. Today is one of the biggest religious holidays the Assuncao de nossa senhora. The solemnity of the assumption of Mary. Jesus ascended into heaven but Mary was assumed. Some say they guess Jesus could do it on his own, but Mary was abducted alien style!!!- (apologies for the irreverence).


We were rudely awakened at 8a.m. by what sounded like canons firing a human canonball that might have been Mary. The town band then paraded past the house, jettisoning our guests from their slumbers with a rousing march. We move to dusk and this is the scene outside Casa Rosada as the sun goes down. Mary is held aloft on a charola, which literally means a `litter´on which sacred images are carried in religious procession, it means `niche´, and levar em charola is to fete someone by carrying them on the shoulders of the crowd.
My food suggestions to celebrate the occasion could include starting the day with a Nuvolone ( cloud souffle ) from Almost Bourdain. To finish the day - Tiramisu literally, translates from the Italian very appropriately as "lift me up" I am not a great fan of Tiramisu but a great recipe can be found at Gastronomers Guide, adventures in gastronomy. Strict Catholics still have to observe fasting and abstinence on the vigil of the assumption, 14th August. So no yummy recipes for them!!!
Email Post