Prato do dia- dish of the day 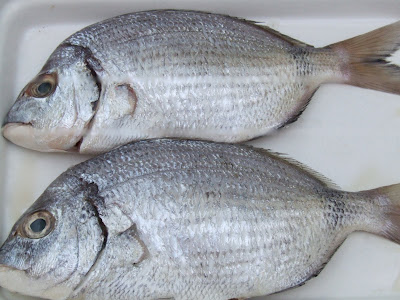 The dish of the day at Casa Rosada is Sargo.Discussing the menu with our guests this morning they decided they would like a fish dish for their main course. I headed off to Vila Real market and Antonio Jorge, my fish man, proffered these two beautiful Sargo. Sargo is famous for being crafty. The story goes that it used to hide from fishermen in rocky crevices, but gradually realised that this made it an easy target for spear-guns and harpoon-guns and then it took to hiding among weeds instead. A crafty fish being served by a mischievous cook - Perfect!!!
I also purchased six salmonetes ( red mullet) for their dinner tomorrow, Sunday. Andrew will fillet the mullet for me tomorrow and I will be serving them as pan fried fillets with sauteed leeks and saffron potatoes.
For the Sargo I am going for a very mediterranean style dish, possibly Catalanian.

Scrub the potatoes and slice each into three, then cook them in boiling water for 10 minutes.Preheat the oven to 220c/ gas mark 8. Drain the potatoes, they should be tender enough to take the point of a knife.Tip them into a roasting tin. Slice the tomatoes in 3 and mix them in with the potatoes.
Put the anchovies, garlic, oregano and olive oil in a processor and blitz. Scrape the paste into a bowl.Season generously with pepper and a little salt, because the anchovies will be salty already.
Pour two thirds of the paste over the potatoes and tomatoes and mix together well coating everything.Add the lemons to the vegetables.Bake the potatoes and tomatoes for 30 minutes until soft and getting a golden colour. Rub the fish inside and out with rest of the paste and lay them on top of the vegetables. Add the olives and bake for 15 minutes depending on the size of the fish.
Email Post