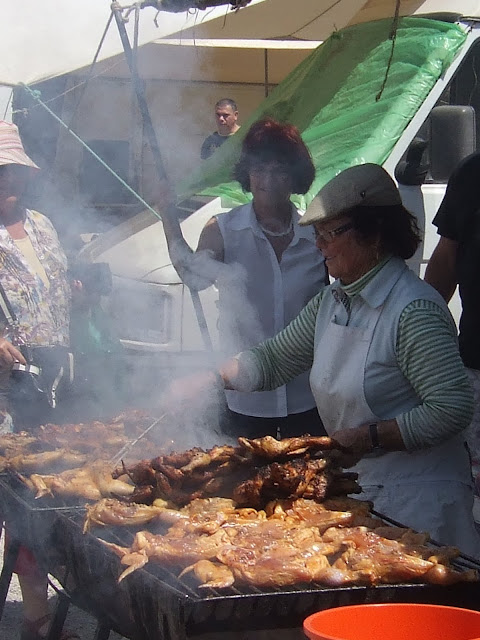 Summertime and the easy living is outdoors.Its the time to OUT the kitchen. The tradition of Portuguese grilling, churrasco, dates back hundreds of years. Introduced to Portugal through Brazil, wood from old cork trees was used to create a fragrant charcoal that gave a great flavour to the meat or fish cooking on the rack above.

Churrasco started in the 16th and 17th centuries with the introduction of cattle ranching in South America. Cowboys, or Gauchos as they are called in Brazil, created a new style of cooking. This established national tradition is even more prolific today, especially here in the Algarve, where the distinctive smell permeates everywhere; from street vendors in markets through seaside tascas, to the terraces and backyards of private houses. Tourists and residents alike can not escape this characteristic smoky aroma.Churrasco (shoo-RAS-koo ) is a Portuguese term meaning meat grilled or barbecued  over hot coals. A "churrasqueira" is the type of restaurant or steakhouse where it is eaten. The most popular and well known churrasco dish is frango no churrasco com piri piri.This is a salty spatchcocked chicken grilled on the churrasco and served with a hot spiced red chilli sauce or oil.The butcher even spatchcocks the chicken for the purpose when you buy it.
There is no reference as to the exact origin of the barbecue but it is presumed that from the fields of fire in pre-historic times man, started to cook game meat and soon realized that the process rendered it more tender. Over time techniques were improved.From one man´s means of survival using just a wooden stake, a succulent steak, a sharp knife, a good fire and salt the original concept spread.From the South American pampas it found no boundaries, crossing countries and continents, generating heated debates about what is the real barbecue. Firewood, charcoal or spit roast, seasoned or not, with coarse salt or refined sugar. Cattle, swine, poultry or seafood. The right thing to say is there is no formula since each region has developed its own type of grill.

The corona,the etymological dictionary of Spanish, states that the barbecue originated from a very old word, before the presence of the Romans in the Iberian peninsula,  "sukarra" (flames of fire, fire), composed of "su" (fire) and "Karra" (flame).
This word first appeared in Castilian  in the form "socarrar" to char and over the centuries derived from different dialectal variants in Spain.In the seventeenth century Spanish explorers to the New World visited the West Indian island of Hispaniola and borrowed the native word barbacòa  (Bar-bah-COH-ah ) which has become "barbecue" as we know it today. Etymological Catalan also cites the Brazilian coxinha or "churrrasca" sheet (fried dough) with a chicken filling.One thing for sure, it brings a flare to your barbecue
by way of a red herring, many people believe that barbeque actually derives from the French barbe à queue, that is, “from beard to tail”, signifying the whole of the pig being roasted (leitao - suckling pig ). Leaving aside the question that pigs don’t have beards (though the allusion would work for goats), the true origin is well authenticated but the story is just another example of folk etymology.
A barbecue is more than a meal. It is an event. People gather for a good barbecue, and as an event, the barbecue gathers people whether invited or not,to watch, smell and eat. Like the fires of prehistory this is the place to eat, drink and tell stories.

The art of mastering top whack barbecuing is not easy and needs practice and experience to get the results.How often do you get burnt by your barbecue. Trial by fire - chicken that´s singed beyond recognition,well done steaks when what you really wanted was medium rare?
On the other hand it it is not Everest, it can be conquered without massive research,without over preparation or over dressing. With the correct marinade, rub or paste what comes off your barbecue can be a seriously sizzling sensation.Why not do what I do, chuck the meat on,turn when necessary and serve with some simple salads.What is so difficult about that? The barbecue is just an outdoor kitchen for when its too sunny to be inside.Its laid back quality should easily grab the spirit of eating alfresco.
Whether you decide on piri piri or chimichurri the choice is yours.
Email Post