Suck it and see 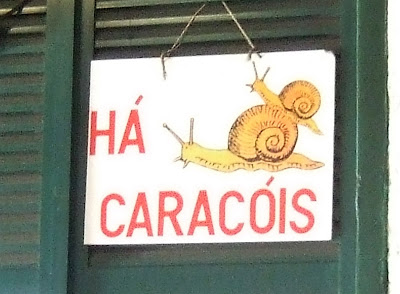 It’s only a day away.The official start of summertime in Portugal, and as the tourists start to move in,on a barmy evening the Portuguese retreat to their local restaurants and bars to enjoy the gastronomic tradition of the season: Caracois- snails! Yes, that’s right, Caracois  are to the Portuguese what a plate of tacos would be to an English wine bar.They’re both cheap snacks, or as we call them here petiscos. Well, they may not be a delicacy here, but they’re definitely something the Portuguese like to eat a lot of, having anxiously awaited the moment in mid-June when they see the signs go up outside the restaurants saying “Há Caracóis!”(We have Snails).
But I never thought I’d see people get so excited over something most English won’t even touch. Walking into a local bar or cafe in the Algarve, between the hours of 5 and 7pm, the whole place is packed with everyone chomping on heaped plates of Caracois. It may look like an enormous amount but these Portuguese snails are much smaller than their known French cousins. There’s a lot of lip-smacking and finger-licking,( napkin dispensers an absolute requirement) as the Caracois are cooked in a very flavourful broth and its custom to just suck them right out of their shells! They do give you toothpicks if you’re not courageous enough, so you can pull them out instead (like I did once when no one was looking).
The tradition of eating Caracois in the summer originated in the southerly Portuguese region of Alentejo, with influence from the neighbouring  Spanish province of Andalucia. Both of these regions get extremely hot in the summer but also have the humidity that promotes snail growth, and these snails are harvested throughout the season until their supplies dry out. The cooking broth is also very traditional with the predominant ingredient being oregano, which is a must (your hands stink of it after eating them!). The other ingredients include laurel, thyme, garlic, onion, olive oil, salt and pepper and the inimitable Portuguese hot sauce that is  piri-piri.  The leftover broth is excellent for mopping up with pieces of crusty bread that’s served with them. When you cook the Caracois, they have to be alive of course, just like shellfish, and rinsed several times to make sure you’ve got all of their glue out.
What is the typical drink then with Caracois? A cold glass of Portuguese beer, (Sagres or Superbock)
If you can get over the squeamishness of knowing what you’re eating then they are quite delicious. The texture is exactly like cooked mushrooms, which I love.
It also has to be the best way of getting to know the locals!
If you are interested in cooking up some caracois for yourself, here is a recipe from Algarvebuzz
Email Post