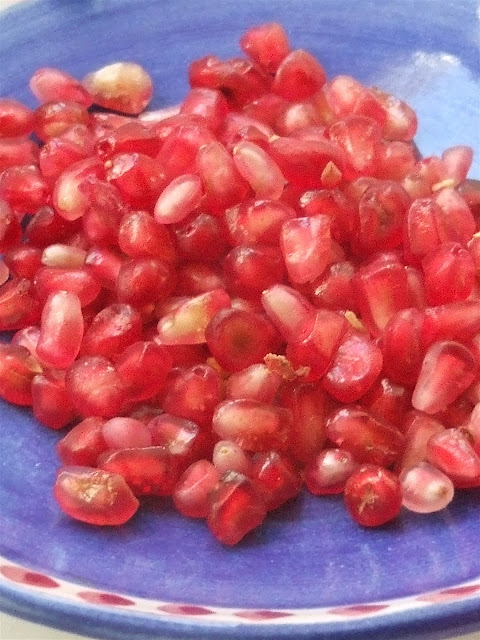 Pomegranates  banked with roses symbolised the alliance of Spain and England, when Henry VIII married Catherine of Aragon and Granada in Spain was renamed after the fruit by the Moors. The Arabs built a pomegranate town? Worcester Pearmain I can understand - but can you imagine a town in South Africa  being named Golden Delicious? The pomegranate is very much a fruit of the old world, a fruit that keeps well without losing its juiciness. I always associate it,not because of Claudia Roden, with North African and Moroccan meals.Blood red seeds garnishing lapis blue bowls abundant with cous cous or as a garnet coloured gravy awash roast pork on plates of enamelled bronze.From late Autumn towards Christmas,they bring an aura of a thousand and one nights, making a cameo appearance in the greengrocers of the dullest towns of remote rural England.
I have to confess to passing the pomegranate by when I lived in England.Who bought them? I though they were they just for seasonal decoration like their cousins twice removed,the gourds. How changed is my opinion now, being confronted with a mass of savoury and sweet Iberian solutions to how to deal with this precious fruit. My latest discovery is a pairing of pomegranate with pork fillet.( sorry no picture, the thespian´s camera just could not do justice to this one, no matter how hard we tried)
Solomillo con salsa de granadas is originally a Mallorcan Pork dish with a gravy made of ruby pomegranate seeds served with a side dish of thickly sliced potatoes fried gently in Banha de porco( Pork dripping ).
Solomillo con salsa de granadas
serves 4
2 pomegranates
50g( 13/4 oz) lard
4 solomillos ( pork fillets)
1 onion chopped
100ml( 31/2 oz) fino or dry sherry
100ml( 31/2 oz) meat stock
salt and pepper
Cut the pomegranates in quarters and with a knife loosen the seeds from the membrane.Reserve a handful of seeds for garnish.Heat the lard in a pan and brown the pork fillets with the chopped onion.Add the pomegranate seeds to the meat with the sherry,stock,salt and pepper.Cover and simmer for 20 minutes. Remove the meat and keep warm. Continue cooking the sauce for a further 15 minutes until reduced.Strain the sauce and serve it over the meat.Garnish with the reserved pomegranate seeds.Serve with fried potatoes