"Coração das Trevas" (Heart of Darkness) is the story by English writer Joseph Conrad of a trip up the jungle.The story centres around Marlow, an introspective sailor, and his journey up the Congo River to meet Kurtz, reputed to be an idealistic man of great abilities.There seems to be a strong parallel here with Chocolatier Claudio Corallo, also an idealistic man of passion with a knowledge of tropical agronomy.Corallo´s is a story of how one man has taken on the world's largest manufacturers and started a personal crusade on Principe to produce the pure old-fashioned chocolate and coffee that older generations used to enjoy. Claudio Corallo is a man who appears to take no shortcuts. He likes to get to the heart of the matter, which in this case is the dark coffee bean and cocoa pod.The history of the cocoa plant starts in the forest between the Orinoco and Amazon rivers.Centuries later, Corallos dream started in 1974 when he took his specialist knowledge, acquired at the overseas Agricultural institute in Florence and applied it in Zaire to a project that aimed to help a newly independent country to modernize its agriculture.It did not take Corallo long to realize that the project was corrupt and losing its way.Bad intentions were creating artificial economies to ensure handsome salaries could be paid to professionals who lacked knowledge in the field.His discovery led to him to buying a coffee farm in the Congo,and it  was not long before the beans Corallo was producing surpassed the expectations of what others said could be done.His fascination with the great variability of aromas and flavours that could be found within one variety was proven.He developed a production system that found the perfect balance between man and his environment.His understanding of the importance of the relationship between the local population and the potential of its land was the key that was lacking in other dominant producers.Here then we see Corallo travelling the same rivers described in Conrad´s book.In modern terms a Marlow searching for similar physical and spiritual ideals.
In 1979 when the Congo became too much to bear with political unrest in Zaire, Corallo was "called to the bar" literally and moved his family to Sao Tome et Principe where he believed heirloom cacao could be found. In his search on the islands,rather like finding dinosaur eggs, he came upon ancient cacao trees that were the original trees brought over from Brazil in the Amazon jungle by the Portuguese in the early 1800s."The flavour brought back old memories of how chocolate used to taste," he says.He bought two old abandoned plantations in the centre of the country and began a process of recovery, not only of chocolate, but of ancient varieties of Coffea Robusta, a species now almost gone, but with quality equal to that of the most famous Arabica.And so the Marlow / Kurtz parallel continues. Corallo creates an improved quality of life by his ability to set up teaching models built on an exchange of knowledge and respect for man and nature.The result is the production of high quality products representing the patrimony they come from.
Despite hardships like having to live in a building without a roof, he gradually expanded his business using original methods in order to preserve the authentic taste.
Corallo now employs 40 families, plus another 120-150 small farmers to whom he subcontract parts of the production process.
"We work with extreme precision through the various stages of production - and we grow the plants without using fertiliser," he says. 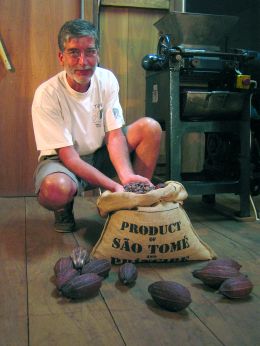 Corallo´s years of agricultural know-how are now being used to produce world-class cacao and coffee on these small African islands. Corallo controls the entire process of making his chocolate from plantation to bar.He grows his cacao at his plantation on the island of Principe and makes his chocolate on São Tomé, both off the west coast of Africa. The fermentation, drying and roasting processes are all developed and controlled by Corallo himself. The roasted beans are coarsely ground to keep the aroma intact. "Conching", which smooths out the chocolate, is not done. Corallo´s chocolate is raw. Natural. Pure.
So from a book published in 1902, to 2012 when a tiny volcanic island off the coast of equatorial Africa has become home to what is described as some of the best chocolate in the world. Aplaudo o realização de Claudio Corallo ( I applaud the work of Claudio Corallo )

Corallo and his sons now manage the family’s cacao and coffee plantations in São Tomé, while Bettina,Corallo´s wife and her daughter Ricciarda run the family’s shop in Lisbon.
In 2008,the creation by Bettina and Ricciarda Corallo of their premises at Rua Cecílio da Sousa 85 in Principe Real
quickly put Corallo chocolate on Lisbon´s gastronomic map.
This is a chocoholic's dream shop. There is no place in Portugal
quite like it. The entire product is from their own coffee plantations and cocoa fields on São Tome and Príncipe.
The chocolates are so pure, they don't need any additives; and they are the only chocolates in the world that contain a distillate (liqueur) that is extracted from cocoa pulp. Some tiny coffee beans are coated in chocolate, and natural ginger or orange peel are sometimes added.

Aside from my love of chocolate, a book that inspired me to write this post:
"Equator"- Miguel Sousa Tavares
Email Post