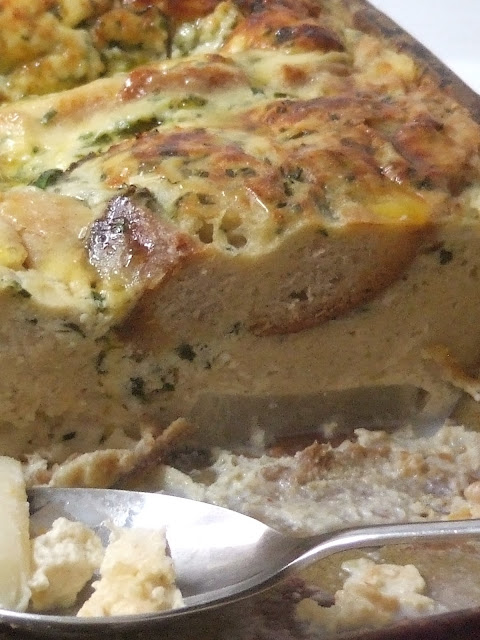 The majority of Portuguese recipes that I have come across using Requeijao are of the sweet variety.One recipe in particular from the Estrela mountain region from where the best Requeijao originates, is a rich cheese pudding including almonds and an overdose of sugar.I decided to explore more savoury avenues,and my task was made even easier by Yotam Ottolenghi´s column in last weeks "Guardian" newspaper.As you know I am Ottolenghi´s greatest fan, and every so often I read one of his recipes and it shouts "make me."I love savoury bread puddings and this one in particular sounded unusual.My first thoughts were that my mother would have adored this.Her staple cheese pudding was
Elizabeth David´s, which I myself make frequently.The David recipe uses fresh breadcrumbs giving it a light souffle finish.
Senor Ottolenghis recipe uses whole slices of bread which gives it a denser more quiche like texture. I made the recipe true to Ottolenghis wishes but I have to say I am not a great fan of the turnip and so if I was to make the recipe again I would omit them.Neither the thespian or myself felt that the noble nabo ( turnip ) contributed anything to the dish,nor gave it the peppery "touch" that was promised.I could not source sourdough bread, so I  substituted sour cream in place of the double cream. As in most of Ottolenghi´s recipes this dish is labour intensive in its preparation but intensely rewarding on the plate.

Serves 4 as a vegetarian supper dish or 12 as a side order to roast meat
400g white sourdough loaf
800ml full fat milk
250ml double cream
2 rosemary stalks,plus 11/2 tsp chopped rosemary leaves
1 large onion,peeled and quartered
1/4 tsp grated nutmeg
8 medium eggs
salt and white pepper
2 medium turnips, peeled and cut into 1cm slices
200g Requeijao or fresh ricotta
90g parmesan, or vegetarian substitute, grated
20g chives finely chopped
Olive oil to finish
Cut the bread into 2cm-thick slices,spread on a tray an leave to dry overnight
alternatively,dry in an oven at 80c for half an hour turning once.
Put the milk,cream,rosemary stalks,onion and nutmeg in a medium saucepan,bring to a gentle simmer,remove from the heat and leave to cool.Break the eggs into a bowl.Once the milk is tepid,strain,discard the onion and rosemary,and pour over the eggs,whisking as you go,until you have a smooth custard.Whisk in half a teaspoon of salt and a quarter teaspoon of white pepper.
Blanch the turnips,(if using)for two minutes,strain,refresh and dry.Layer the turnip slices on the base of a22cm x 29cm ovenproof dish.
Mix the Requeijao,parmesan,chopped rosemary and chives, and spread over one side of each bread slice.Lay the slices cheese side up in the dish,standing them up on an angle and overlapping.Spoon the custard over the bread to just cover,and gently press down the bread to immerse.Leave to sit for an hour to an hour and a half, gently pressing the bread down and from time to time and adding more custard.-you may have some left over, depending on how absorbent your bread is.
Half an hour before you are ready to bake, heat the oven to 180C/350F/gas mark 4.
Cover the pudding with foil,bake for 20 minutes,remove the foil and continue cooking for afurther 25-35 minutes,until golden brown and crusty.Poke a knife into the centre and gently press down-if no cream surfaces its ready. allow to sit for 10 minutes before brushing the top with olive oil and serving.