Eu como legumes pra chuchu. E você?   I eat a lot of vegetables. And you?
Chuchu = chayote.
Pra chuchu is a Brazilian Portuguese street smart expression that means “a lot” or “very”. It is said that the expression was created because chayote grows abundantly almost anywhere in Brazil.
My first encounter with Christophine was at the Old Fort restaurant, the highest point on the Island of Bequia in the Grenadines.She drew me in from the moment I caught site of her as I cast my eye over the menu.I could tell already that one day we would become bosom pals.Her defining qualities reminded me of English painter Beryl Cook who painted larger-than-life, usually older ladies with wrinkled buttocks. I had my first taste, and left the restaurant self-assured that our paths would cross again.I spotted her again last week travelling under her Portuguese pra chuchu nome de plume in a supermarket in Vila Real de Santo Antonio. I brought her home and like Educating Rita, I brought out the best in her. This beautiful mature legume inspired so me much  that I turned her into more than the dish she could ever be,a Greek inspired Moussaka.I risked having plates thrown at me by the likes of Demitri, Theodore or hordes of holidaymakers returning from Corfu. I abandoned the all-important aubergine in favour of my newly preferred lady legume, the pra chuchu.The other crime I might be accused of committing against this iconic Ionian dish is seasoning my meat with Ras-al -hanout.However in the 1920s, Tselementes, a Greek chef who travelled far beyond Greek shores published a book.There is a whole chapter entitled "Mousakas" in Tselementes' book. It includes six recipes, basically substituting zucchini, artichokes, or potatoes for the eggplants. He even has one very interesting variation with alternate layers of zucchini and tomato slices, both dredged in flour and fried. "Tselementes" nowadays for Greeks is synonymous with "cookbook."Oh well, should my critics should utter my defence will be "its all because the lady loves ras al hanout."
Brazilian Moussaka
serves 2 for a main plate or 4 individual starters

Pre-heat the oven to 180C. Boil the chuchus unpeeled in salted water until tender, testing them after 30 minutes.Run them under the cold tap to cool them then cut them into 0.5cm slices.Set aside.
Meanwhile, put 2 tbsp olive oil into a large frying pan over a medium high heat and cook the onion until soft. Add the garlic,Ras-al-hanout and oregano and cook for a further couple of minutes, then stir in the lamb. Turn up the heat slightly, and brown the lamb well, cooking until the mixture is quite dry. Stir in the tomato purée and bring to a simmer, then turn the heat down low and cook covered for 30–40 minutes until most of the liquid has evaporated. Season and stir in the parsley.

To make the bechamel. Warm the milk, and melt the butter in another saucepan. Stir the flour into the butter and cook for a couple of minutes, then gradually whisk in the hot milk. Cook until you have a thick sauce. Remove from the heat and allow to cool slightly, then beat in the eggs, salt to taste and generous nutmeg.
Arrange a layer of the chuchu slices on the base of a greased oven dish, and top with half the meat. Repeat these layers, then finish off with a layer of chu chu, and top with the sauce. Bake for about 45 minutes until well browned, and then leave to cool for half an hour before serving.
For individual starter portions:
Choose 4 x 7cm  pastry cutters and put them on 4 sheets of cooking foil large enough to form a base under the cutter and then wrap around the outside of the cutter to a height of  the depth of the cutter and half again. Cut 8 previously boiled slices of chuchu. Lay a slice of chu-chu on the bottom of each cutter top with a generous layer of meat filling and press down, cover with a second slice of chuchu.Top with bechamel sauce and cook as above.
Try another pair of chu chus....... 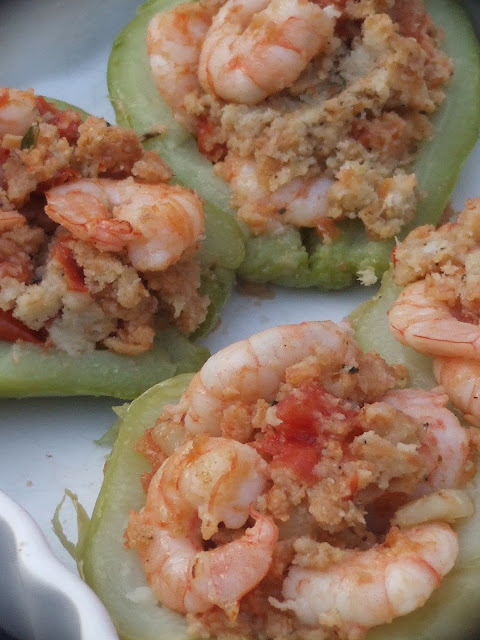 Chinelos pequenos de chuchus creoles com camarões
little Creole chu chus with prawns
serves 2
2 Pra chuchu
50g (2oz) breadcrumbs
4 tbsps home made tomato sauce
250g (8oz) shelled shrimp or prawns
salt pepper
1tsp Cajun seasoning
Boil  the chu-chu unpeeled in salted water until tender,testing them after 30 minutes.Run them under the cold tap to cool them,then scoop out the insides,leaving enough to make a firm shell.Mash the insides and to a pulp with the Cajun seasoning, in a processor.
Put the seasoned mashed chuchu into a frying pan with a good knob of butter,and cook quickly to get rid of excess water.As the mixture dries out,mix in 50g(2oz) breadcrumbs and fry a little longer.Stir in 4 tablespoons of the tomato sauce and 250g (8oz) shelled shrimp or prawns.Season with salt,pepper and cayenne.
Allow to cool slightly and then fill the scooped out chuchu shells.Sprinkle them with breadcrumbs and some melted butter and parmesan cheese.Bake at 200ºc /400ºf/ Gas mark 6 for 15-20 minutes.The tops should be golden brown,and have taste of downtown New Orleans.
Email Post