Dining out recently in one of our favourite local restaurants, we received a little surprise.Having placed our order and whilst awaiting our starter, two unexpected plates arrived in front of us supporting 2 rolled stuffed chicken breasts.We were informed that this was a little extra soupçon chef had put together specially for us. It was extraordinarily delicious but we couldn´t quite nail the flavour nor the key ingredients of the stuffing other than it was something  smoked.On questioning our waiter, he told us that it was Farinheira and with a further reccomendation that we should try it cooked with scrambled eggs.Fascinated I was, and kept it in my back head for later.Was this  a Portuguese-inspired modern take on scrambled eggs? We would later learn in the aftermath of our suffering stomachs, a little goes along way. One needs some Portuguese stamina here, and not only that but a certain familiarity in the quantities used for one of the nations popular dishes.

Farinheira is a Portuguese smoked sausage made mainly from wheat flour, pork fat and seasonings (white wine,garlic, paprika, salt and pepper).It can not be eaten raw because it contains flour and is not cooked.In its original incarnation it  did not contain pork fat; it was created by the Jews during the 15th century to deceive the Portuguese inquisition,making them believe that they were converted to Christianity by showing they were eating pork. It has a yellow/brown colour to it and is served in traditional dishes like fejoiada  or cozido à portuguesa , however it can also be eaten on its own, roasted or fried. In the method our waiter suggested, it is previously cooked,and then  mixed with scrambled eggs  and served in bread or with toast as a starter.
Although it resembles a chouriço or other meat sausage, its taste is not meaty; it's tangy (but not hot), with a doughy texture and has a somewhat sweet finish on the palate. It is never cooked sliced unlike other sausages since its dough like content would pour out of the skin during cooking. 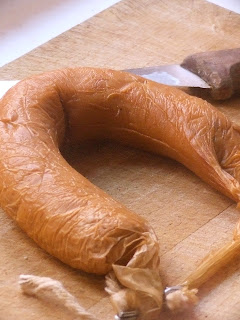 HOW ITS MADE
The Farinheira mixture is filled into pork intestine to 2/3 of the total size. After separating and closing them up, they are smoked for 2-3 days and end up drying in the sun. They're still not cooked at this point, just smoked, you should cook them after this or rub in olive oil and they preserve for a year.If you dont have a dry dark larder to hang them up in you can freeze them. I would not reccomend making them yourself because of the mess involved and the amount of pork fat, like rillettes is not so healthy at all.Delicious nevertheless. 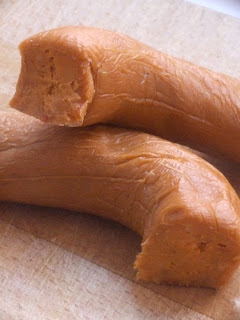 You will need about half the sausage pictured above to make scrambled eggs for four people.
First remove the filling carefully with a sharp knife  or rip it open with your fingers. Don't try to squeeze it out or you'll lose half of the content that adheres to the skin. Remember, the skin is NOT EDIBLE so make sure to remove it.When all of it is removed, mash or cut the farinheira into chunks. Don't worry if they're too big, you'll be crushing them almost until it's ready so the bits will get smaller.Turn on the heat. Because of  the excessive  lard content in the farinheira you won't need oil, even with a non stick pan.
Keep it on medium-high heat until the bits are melting and turning slightly golden. As it cooks you will see,the lard emanating from the filling. Beat the number of eggs for the number of people you are feeding season with salt and pepper and proceed as you would for making scrambled eggs.