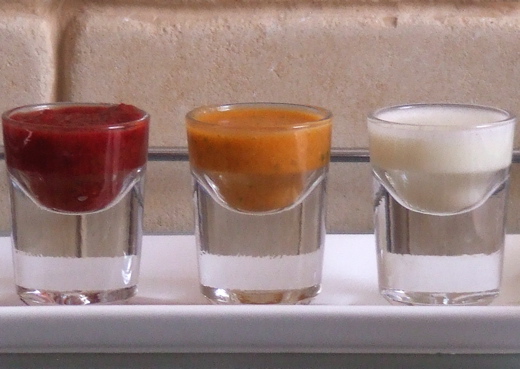 Three super cool soups for a hot sultry summer meal.Try them separately or  take three shots at it like I did.Its the no cook easy way to impress and all I needed was a "little help from my so called friends".Traditional recipes for making Andalucían* gazpachos, samorejo and ajo blanco came from Elizabeth Luards book "The food of Spain and Portugal" and a thoroughly non-authentic influence but nevertheless delicious beetroot gazpacho came from Sam and Sam Clark at their revered restaurant Moro in East London.I have meddled with the traditional samorejo and introduced some extra spice not in the original.The ajo blanco has a lovely twist introduced by you´ve guessed it Yotam Ottolenghi.The traditional Andalucían* gazpacho is a poor man´s food,a fortifying bread-porridge served iced cold to cool the intensity of an Iberian summer.In its modern incarnation it is an elegant chilled tomato soup.By contrast, the gazpacho blanco has a thinner consistency. The infusion of almond milk heavily impregnated with garlic owes its pedigree, as so often in Andalucía*, to the sybaritic Moors.Elizabeth Luard warns us all to take heed "It has the kick of a mule" she says.