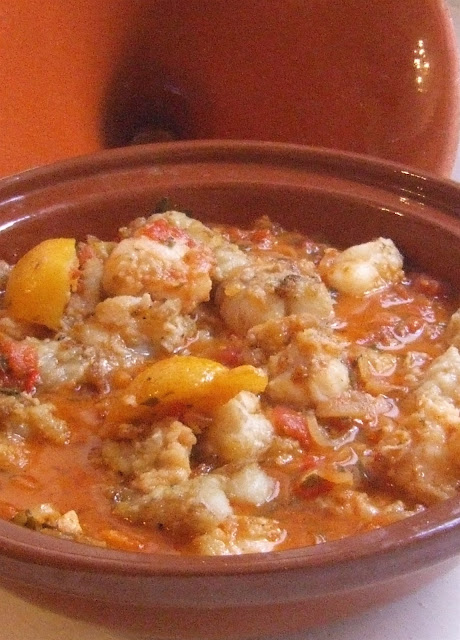 It is a custom apparently, to say that Morocco is "a cold country where the sun is hot" and where the sun is hot,the food needs to be summery and `cool´. Moroccan food is not as hot and spicy as some might think, and generally quite light.The Moroccan method of spicing is  very easy on the palate.Many traditional tagines (also the dish name) call for lamb or beef cooked for 3-4 hours. In addition to becoming very tender, the meat also browns well in a tagine. Vegetable, fish, and chicken also benefit from this technique but conveniently require much less cooking time.
Besides being able to serve food in a sleek, exotic, and unusually shaped vessel which requires little or no additional cleanup, the labour is also minimal. Due to the low temperature and sealed in moisture, the dish only needs to be checked for doneness. No stirring necessary. For me this makes for an all around dinner winner.
Cooking in a tagine is quite a common way of cooking fish in North Africa and if you are lucky enough to have a conical tagine, it is great to cook ( or at least finish cooking) and serve a fish stew in it.
I thought it was about time I learnt about monkfish.My knowledge of monkfish was little more than it was a robust fish. It’s got a tough texture that can be a turn off.
The recipe said "Cut it into 1-inch thick pieces". (A half of a monkfish tail typically weighs a half-pound (250g) or a little more — though they vary in size — so 4 tails  was perfect for the three people I was serving, including us.) I seared the pieces, fast, in sunflower oil.Then I put the monkfish back in the sauce, and let it soften there while I cooked the cous cous — half a pound of that, too.  All in all, a delicious and pretty simple dinner.

A simple Monkfish tagine
1.5 kg monkfish on the bone,skinned and cut into 3cm slices.
Salt and freshly ground pepper
Flour for dusting
Sunflower oil for frying
1 tablespoon olive oil
2 large onions,roughly chopped
4 garlic cloves crushed
1 red chilli de-seeded and finely chopped
1 tablespoon chopped fresh ginger
11/2 teaspoons ground cumin
11/2  teaspoons paprika
1/2 teaspoon crushed fennel seeds
generous pinch of saffron threads
2 x 400g tins of tomatoes
1 litre fish stock
1 preserved lemon halved
1 tablespoon chopped fresh coriander
Season the fish pieces and lightly dust them with flour.Heat some sunflower oil in a non-stick or heavy frying pan and sauté them on a high heat for 2-3 minutes each side until lightly coloured.Remove from the pan and set aside.Meanwhile,heat the olive oil in a heavy-based frying pan and gently cook the onions,garlic,chilli,ginger and spices.Cover and cook gently for 4-5 minutes until the onions are soft. Add the tomatoes and stock,season with salt and pepper, and simmer for 30 minutes or until the liquid has reduced by about two thirds.If you are using a tagine,at this stage transfer the sauce to the tagine( or casserole), add the fish,preserved lemon and coriander to the sauce,cover with the lid and place in a hot oven 230C/450F/Gas mark 8 for about 15-20 minutes or until the fish is just cooked.Serve with a cous cous of your choice or fattoush.