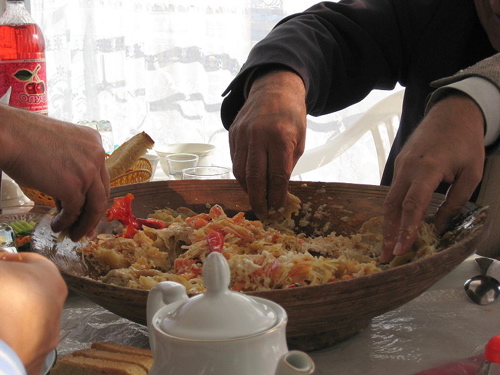 I just love eating with my fingers,there is something very decadent and satifying about digging in manually.Eating with the hands is common in many areas of the world, including parts of Asia, much of Africa and the Middle East.There are some foods that create very little controversy when eaten with your hands. When it comes to ethnic foods you usually have to bid farewell to the traditional knife and fork, at least if you want to get an authentic experience.Indian food has naan bread and Ethiopian food is eaten with Injera another type of bread. Surprisingly however, many Westerners have a problem eating with their fingers.Conservative table manners seem to indicate tearing up bread and dipping it ferociously in a bowl of olive oil and balsamic is as far as inhibitions will allow for most diners.And from where did this preprandial dipping dish originate? In Italy olive oil is certainly eaten with bread but this dipping malarky goes no further than the top of the grocers counter or gourmet trade fair stand.In order to sample a specific oil to see whether you like it, you might pour some onto a plate and sop it up, or you would pour it directly onto the bread, but only just enough to taste.Eating a whole bowlful of oil saturated bread fills you up before the pasta course even arrives.Could this idea have stemmed from a healthy option idea of a low fat replacement for  traditional bread and butter? Certainly a good compromise, but not Italian.
For some,there is a squeamishness in being  intimate with your food.For others, it's all about hygiene.Eating with your fingers allows you greater control over cleanliness.You can, and should, wash your hands well before eating.While you are being served this style of food restaurants will feel obliged to provide finger bowls to ensure your hands are cleansed throughout the process.Hands-on eating often proves to be much neater than expected.Try and forget early table training, and recapture some of the childhood joy of playing with your food. For others it is a difficulty with technique, especially when rice is involved.  You can't go back to the" fistful of food " method you perfected when you were two.There is no way around it. Indian food tastes best when eaten with your fingers.  There is not only a tactile dimension added to the eating process, but a practicality too. Some foods are designed to be eaten by hand,prawns,tortilla wraps, hamburgers, sticky ribs and pizza. HELLO, until recently, you would have been hard-pressed to find many restaurants in the United States accepting this concept but this is the greater part of the all American diet we are talking about.
Breads are baked to be torn and wrapped around foods. Eating with your fingers is not only a cultural experience but something everyone should at least try. Eating with the hands evokes great emotion. Using a fork is unthinkable in traditional Indian eating, and in Ethiopia if you are on a date or dining with someone you really like, scoop up some food and feed them. This is a tradition called "gursha." It's basically an act of kindness and respect towards the other person.The Ethiopian way is to serve the food on top of the injera, but you'll also have extra on the side to pick up the food with. Start by tearing off a piece of injera. Usually half the size of your palm is good enough, maybe a little less even. As long as you can scoop up enough food, you're in good shape.Choose which dish you want to try and scoop up some with the injera. Don't overdo it. It's not  nice sitting across from someone who has food falling out of his/her hand or mouth and back onto the shared tray.
I was onced spotted by a customer tossing a salad with my bare hands.Since my hands were spotlessly clean I did not see the problem, but in the eyes of this individual, Health and Hygiene should have insisted I wear gloves.

Of the foods we serve at Casa Rosada I have yet to witness guests accepting the concept of using their fingers.This results in plates of half eaten quail returning to the kitchen, and sticky ribs that customers have given up on trying to dissect with a knife and fork.I have even witnessed people eating prawns in a restaurant with a knife and fork.Part of the joy of eating prawns is in the peeling of the shell and pulling the flesh apart with your fingers.Once in your mouth the other thing is how about removing things from your mouth - the general rule for removing food from your mouth is that it should go out the same way it went in. Therefore, olive pits can be delicately dropped onto an open palm before putting them onto your plate, and a piece of bone discovered in a bite of poultry or game should be returned to the plate by way of the fork. Fish is an exception to the rule. It is fine to remove the tiny bones with your fingers, since they would be difficult to drop from your mouth onto the fork. If you need to spit out a fatty piece of meat, spit it into your napkin, so that you can keep it out of sight.

A perfect recipe for hands on dining..

Peel the carrots, chop into large chunks and cook in boiling salted water for 15-20 minutes
or until soft. Drain well and whizz in the processor with all the other ingredients.
serve immediately or allow to cool if you are using it as a dip.Use bread to mop up the carrotand use it as avehicle to carry the cous cous.

Now, several high-profile chefs are asking diners to get their hands dirty, in the belief that it heightens the sensual connection to food and softens the formality of fine dining.I´m all for that as long as it doesn´t become over stated.What would dear old Miss manners say?
Do you want to share your secret or not so secret of hands on dining? And don´t you think it would be  fun to throw a dinner party where all the food was eaten with your hands?
Email Post