A terrina do trapaceiro - A cheats terrine 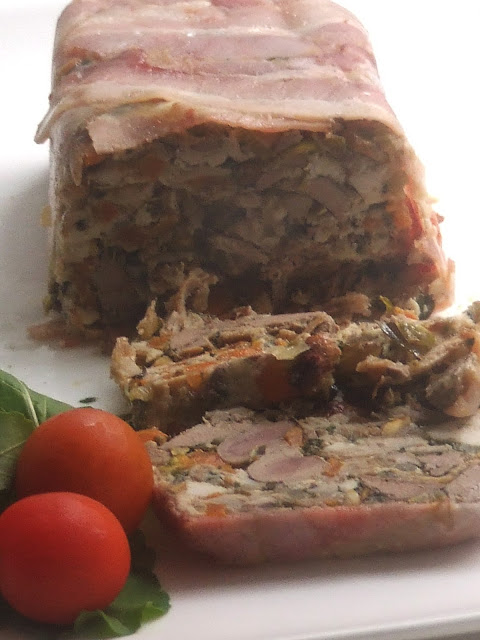 Essentially a terrine is any dish made in a small, deep earthenware container with a tightly fitting lid ( the french word means literally `made of earthenware´and comes from the latin terra, `earth.´) The English then borrowed it in the Eighteenth century and called it a tureen.
A quintessential terrine is made from finely chopped or minced meat-typically with a base of lean and fat pork,and often with other meats, such as game, duck or veal added to it.It was then cooked in a terrine, in the oven, in a Bain Marie.The full French term for this type of terrine is pâté en terrine,which is abbreviated to pâté as well as terrine.This seems to have led to pâté and terrine becoming virtually synonymous,in both French and English.However in the 1970´s all was not well and things went astray in camp pâté.A foodie fashion foray into the realms of vegetable terrines was upon us. 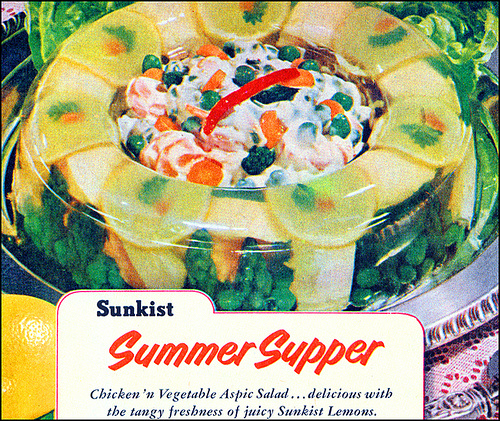 Vegetables of contrasting shapes and colours were layered in a mousse or sauce set in aspic, so as to produce a marbled effect.Having recently read Fabulous Fanny, whenever aspic is mentioned the fabulous Fanny Cradock,with her over the top creations now always come to mind.( a brief note here: aspic is a transparent jelly in which cold fish, poultry meat and or vegetables are sometimes served. It's used as a garnish to glaze and protect fish and other food from drying out (the clear aspic allows any decoration to be seen), and to set savoury foods in a mould).My dear mother committed numerous food faux pas in the name of aspic.She was one of Fanny´s followers and was ever at the ready with lunch dishes in which she used a heck of a lot of aspic.She drowned eggs and all manner of vegetables including frozen peas  in tureens deep in this savoury gelling agent.Eggs in Aspic (Oeufs en Gelée)was one of the quirky wonders of old-school French cooking that she resorted to time after time.This classic French dish was typically served as a first course, aspic being used to encase poached eggs in a delicate consommé.Ne pas moi mother, but one of your, shall I call it triumphs, was hailed by those others who were party to your lunch table.

The only explanation I can find for this strange food phenomenom is that these foods looked curious and intriguing when displayed in aspic.Have you ever been served anything in aspic? It's often the colour and texture of a Whiskas cat food pouch pack, and an unpleasant reminder that you're eating something made from horse knuckles.Like the great American adventures in space travel at the time, they hovered weightlessly in the clear brown gel, perhaps seeming to mimic Neil Armstrong, who I remember watching on our modest black and white Ferguson TV as he took one small step for mankind.He was seen hovering in zero gravity on the moon like these poor  unsuspecting vegetables suspended in setting gel. Then Julie and Julia saw us marveling at the latter day blog author plowing through the dozens of aspic recipes contained in The Art of French Cooking? Aspic was  important enough for Julia Child to devote much of her writing to the stuff, as despicable as we may find it today. Thankfully, by the 1980s, nearly everyone had admitted that, while visually interesting, anything suspended in aspic tasted vomitous and moved on to concocting new and more heinous modern creations.For those Portuguese readers out there I have found for you one classic  dish adapted from Alan Davidson´s classic book North Atlantic Seafood -  Portuguese Hake in Aspic (Pescada en Gelia).For those brave enough to dabble with this retro malarky let me know how you get on.Meanwhile back in Portugal 2012, yesterday I needed a fast recipe for a light lunch.I had in the fridge, left over from Sunday night´s dinner, a tupperware container of cooked rabbit and another bowl of the discarded uncooked rabbit livers.While walking on the beach in early morning autumn fog my first thought was rabbit liver pâté and toast.My befuddled mind was a little misty too and I needed to return to base and think in slighly more substantial terms.My solution turned out to be not so much a pâté more a terrine, but I did not have enough time,in fact only a couple of hours.So sem Aspic,sem gelatina,sem text and no time for ovens or bain marie, I decided to make a cheat´s terrine.I gently sautéed some celery, carrot, onion and parsley in a mixture of butter and olive oil throwing in some thyme and crushed juniper berries for good measure.I added the rabbit livers stirred it all about and then tossed in some white wine from the fridge door,put a lid on it and, reducing the heat, simmered it for 20 minutes.After 20 minutes I removed the pan from the heat and let the concoction cool.I then removed the meat from the cooked rabbit and chopped it coarsely.When my cooked mixture was cool I stirred in the chopped rabbit meat and some halved pistachios.Lining a "tureen" with foil I fried off some thin rashers of bacon and lined the terrine with overlapping rashers.I tipped in the pan mixture pressed it down well,wrapped the excess foil over the top of the mixture and put it in the fridge pressing it down again with some heavy weights. One and half hours later lunch was ready and I had just created this year´s culinary swindle,ready for slicing.Eh Voila.I hope yours turns out like mine.
Close