Autumn is here and the evenings are drawing in.Nights are fresher and cooler but we cant help turning our memories back to a hot sultry summer of street food when we wandered the streets of an evening and enjoyed a street snack or two.In summer all over Portugal from beach to inland town festival we find food we can eat "on the hoof".
It might be the bolinhas man peddling his doughnuts from a basket on the beach "Bolinhaaaaaaaas,con crema, sem crema." Sunning yourself on a beach towel, this is the sound that  might have raised you from nodding off on your Maeve Binchy to join the queue for a fresh doughnut.
Trolling the Streets of Castro Marim during the four day Dias Medievais festival in August the smoky smell of Chocos assados na brassa (Barbecued Cuttlefish) or Polvo seco assado (dry roasted octopus tentacles) might have tickled your taste buds. Torresmos and couratos, the latter normally on sale at large popular gatherings, such as football matches,are not particularly summer fare. Usually served on a sandwich,and accompanied by a beer. I am saving more on that story for later Kirsty. 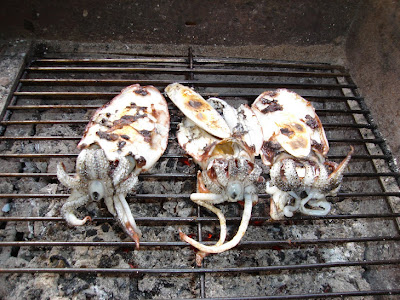 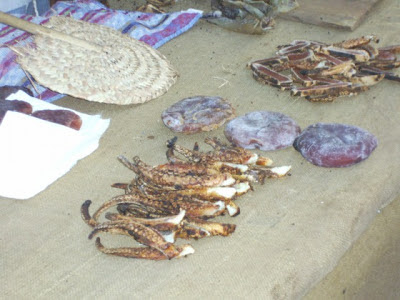 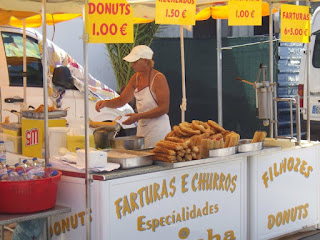 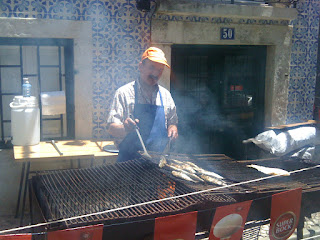 And last, and most certainly not least, throughout summer the sardine season heralds the smell of fresh sardines being grilled on charcoal in the streets of Portugal.The many festivals of Santos populares throughout June are accompanied by stalls selling grilled sardines.
The characteristic smell of grilled sardines permeates everywhere, during the summer months, when literally tonnes of them are consumed. Natives and tourists alike devour them by the dozen from street vendors, like this one in Lisbon.Put one on a slice of bread and eat it with your fingers while the fat of the fish drips into the bread.You´ll only regret it if you don´t. 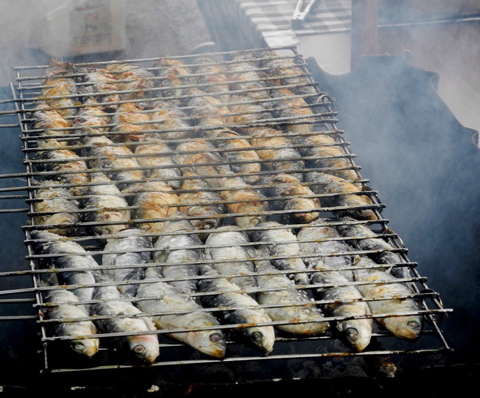