I have always had an interest in fashion forecasting and predictions of trends to come.In particular, what the journos think we will be eating in months to come is of particular importance to me.
This time last year I noticed  The Huffington post listed among their food predictions for 2012, 'Posh' Pork Scratchings made from British pigs with no MSG (Monosodium glutamate - a common food additive), created by Tom Parker Bowles (Right royal relative)  Matthew Fort (imagined offspring of Elizabeth David and Jack Kerouac ) and posh pig farmer Rupert Ponsonby.
Well fashions come and go but my initial thought was, could pork become as popular as this summer´s peplum was going to be.A summer of pork and peplum, my darlings what heaven that could be. Pork scratchings, the humble and beloved British bar snack,originated in the early 19th century, when the production of meat began to be industrialised. The term literally denotes the scraps from the slaughterhouse floor.The origin of the peplum is more recent and goes back to the 1920's when it rocked frocks in different forms and then had a huge high street revival in the summer of 2012. Two parallel trends were running alongside each other.A  posh version of a food supposedly originated from scrapings off the factory floor that needed to tickle the exacting tastebuds of the average British pub-goer, and a fun jolly pretty dress, of which many I expect, were rescued at the end of the day from the floors of Primark stores. Peplums are most certainly not a look that only string beans can wear.They accentuate the waist to-hip-curve and many big porky bootylicious bottoms sported them this summer. Beyoncé and Liv Tyler were both peplummed out this summer, but would the re-invented pork scratching renamed "crackling" by its modern marketeers get noticed at a red carpet party? The competition was in full swing.The Three marketeers,Parker-Bowles, Ponsonby and Fort aimed to transform the fortunes of these time-honoured little strips of salted "crackling", as rich in lore (the shattered tooth, the scorched pig hair, the rumoured possibility of encountering a nipple) as they are in saturated fat. This was an upmarket revolution based on high-quality ingredients and careful cooking.On the other hand Michelle Williams in Luis Vuitton peplum was not so successful,there was insufficient pork to carry it off.
Traditionally, scratchings are fried and made with the softer, relatively hairless skin with attached fat, behind the hock (back foot) of the pig; crackling is roasted or baked, and can be made from a wider portion of the pig.Every culture has them: foods that only a local could love. In case you’re brave and curious enough to try new things like me, or prefer to be informed of what can be avoided,just try making your own home made version of pork scratchings. International versions include pork rinds and cracklings in the USA, grillons or grattons in France, chicharrones in Central America and the Spanish Caribbean,but no Danish bacon here in Portugal mother,just pure nationally reared belly pork,boiled then fried and called Torresmos("crackling").
Its now Autumn and Lana del Rey is singing her modern cover version of Bobby Vinton´s Blue Velvet and sporting a peplum blouse by H & M Hennes. Peplums are now the new normal,but no good when travelling on a bus.Pork scratchings or crackling might be the new gastro pub grub but whether or not this ethical pub snack,suitable only for people with strong healthy teeth, will take off remains to be seen.My gut feeling is more peplums than packets of pork scratchings have been sold in 2012.Are you a peplum sporter, a crackling cruncher or both? Whichever; if you want to set the pig among the pigeons with your guests here is the pattern, sorry recipe. When I put these on the table to accompany aperitivs at the Thespian´s  father´s recent 80th birthday bash they ran like pigs in a pen off the table and there wasn´t a rustle of peplum in the room. 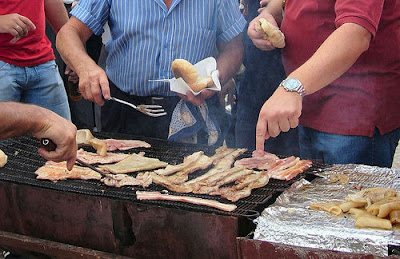 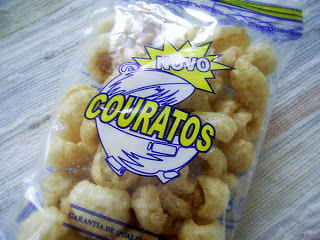