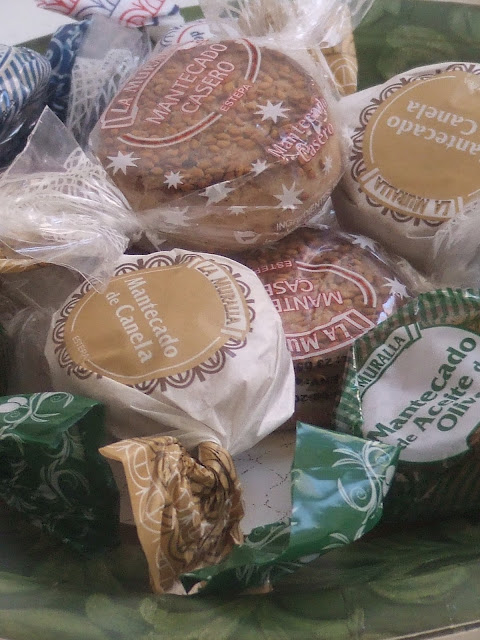 Our guests from Seville this weekend were returning for their second visit, this time to celebrate their wedding anniversary.Like the wise men before them they came bearing gifts, not of gold frankincense and myrrh but cookies, chocolate and marzipan,all sweet traditional Andalucian Christmas goodies.
Well, it is December now so I suppose there is an excuse to consume some seasonal delicacies.I’m  not really sure if I like all of them or not, but I think that  when December rolls around basically anything sweet tastes good. I also love these drop in the ocean chances to be informed about other cultural and gastronomic traditions.
Mantecados and polvorones are little Spanish cookies they come in a variety of flavours, almond, cinnamon, chocolate,olive and even wine.
While mantecados can be found at any time of year in Spain, polvorones are usually consumed at Christmas.The history of Spanish cookies dates back to the 16th century, and it was first elaborated in Andalusia, some say in Estepa, others in Antequera and up till today these two towns are still in dispute over the invention. Unlike many Spanish foods, it wasn't the Moors that created them, as one of the main ingredients is lard.

We were told told that the town of Estepa smells like a cake factory in the run-up to Christmas, as local bakers and even home cooks work to meet the demand for its favourite biscuits. Some bakeries allow visitors to observe the baking process, and there is a small museum to the history of Estepa's biscuit tradition in the La Estepeña biscuit factory.
These traditional Spanish crumble cakes or "mantecados" crumble very easily. In fact, they are so soft, they will literally melt in your mouth. Light and with a delicate anise flavour, words will not do them justice. You'll have to make them to see why they are a Spanish family favourite and why no Spanish home is without "mantecados" at Christmas!

Spread the flour in an oven tray and toast it in the oven until lightly coloured,stirring frequently so it browns evenly.Toast the almonds lightly,then chop finely or grind( a processor works well for this).Cool the flour and combine with the ground almonds.Beat the lard until smooth and fluffy.Beat in the sugar and cinnamon,then add the flour and almond mixture a little at a time and the toated sesame/ anise seeds if using.The dough will be quite crumbly.Pat it to a thickness of 1 cm(3/8inch ).Cut into 5cm (2inch) circles and place on a baking tray.Bake in the oven until the cakes are dried,about 30 minutes.Let them cool,then dust with icing sugar and wrap them individually in white tissue paper. 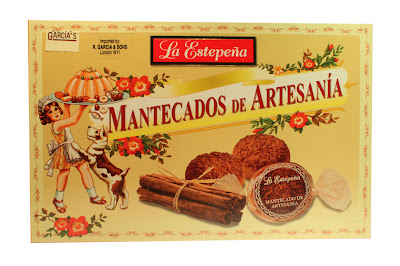 If you are a bit pushed busywise:
For UK readers only a reliable brand is imported by  Garcia´s the Spanish delicatessen at 246 Portobello Road,London and also available at their online store.
Email Post