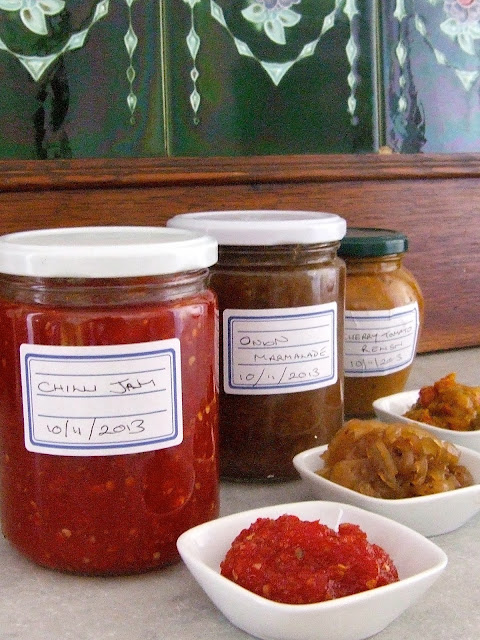 It always happens at this time of year "my dears".When the Christmas adverts come on the television I hear voices in my head telling me to start preparing for the forthcoming incumbent festivities.Well I can do better than Iceland, Morrison´s and Marks and Spencer.No more so than this year when Casa Rosada is going to find itself with almost full occupancy throughout the festive season and whats more we will be offering a special New Years eve dinner for the first time. "My dears" last weekend I responded to these voices and with a little bit of theatrical musicality I found myself In the kitchen surrounded by an abundance of glass jars,lids and preserving pans singing "You gotta pittle a bottle or two.If I had been Fagin I would have been offering orphans a roof over their head in return for picking silk handkerchiefs from the likes of rich gentlemen.I however picked the produce myself. I certainly do not expect this of our discerning customers who have paid for bed and breakfast with the option of a Portuguese Réveillon.Having artfully dodged my way round the thespians prickly pruning I brought indoors an autumnal glut of chillies and less than ripened cherry tomatoes.To supplement this, on Saturday during a market adventure I found brown onions with a certain redolence that was crying out to bring tears to my chopping board.Well "my dears" at only 39 cents per kilo how could I not lug a sack home.First off the chopping board and into the preserving pan was chilli jam, a damn good dipper for all kinds of canapé,prawns or meatballs.Next up I adapted Stephanie Alexander´s green tomato relish to suit my bucket loads of unripe cherry toms.This relish will be perfect with my home-made pork pie or in a turkey sandwich.Finally my olfactory onions hit the pan and, with a nudge of help from some cumin seeds and raw cane sugar, produced a gorgeous onion marmalade that can be slathered over mature cheese and crackers.Didn´t I do well and all in the space of one afternoon.You see "my dears" just what you can achieve if everything is at hand. I hope I will be commended for "a little something I produced earlier."And if you are still wondering about my thoroughly insincere and disingenuous use of the phrase "my dear" it was one of Fagin´s distinguishing traits. Enjoy!!!!
Chilli Jam
10 hot red chillis
800g tomatoes
4 cloves garlic peeled
300g(10 oz) caster sugar
4 tablespoons white wine vinegar
In a food processor whizz the chillies,tomatoes and garlic until smooth.
Put the mixture into a medium sized pan.Stir in the sugar and vinegar.Boil rapidly for 25 minutes or until it has reached a jam like consistency.cool slightly then pour into sterilized jars* and seal. 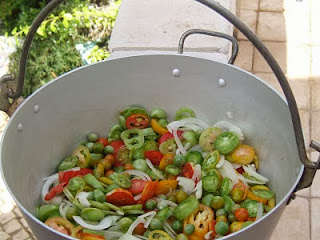 Stephanie Alexander´s Green Tomato Relish(adaptation)
1.5kg green or semi-ripe cherry tomatoes
2 large onions
1/2 teaspoon salt
1 tablespoon Dijon mustard
1 tablespoon garam masala
1/2 teaspoon cayenne pepper
1 teaspoon mustard seeds
pinch of ground cloves
pinch of ground turmeric
100ml cider vinegar or white wine vinegar
100g sugar
1 teaspoon cornflour
Thinly slice the tomatoes and onions, then put all the ingredients except the cornflour
into a preserving pan.Bring to the boil, then lower the heat and cook, uncovered,
for 1 1/4 hours. Mix the cornflour to a cream with a little water. Remove a ladleful
of hot liquid from the pot and add to the cornflour cream.Stir, then quickly return
the mixture to the pot, giving it a good stir so that the liquid thickens evenly.
Cook for 15 minutes, then spoon into hot sterilised jars* and seal at once.
Store in a cool dark place for up to 1 year. 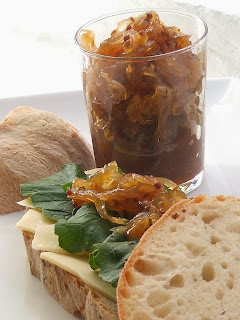 Onion Marmalade
8 brown onions sliced
1tablespoon cumin seeds
1tablespoon coriander seeds
3 cups (24fl oz 9 white wine vinegar
21/2 cups (20floz) light brown cane sugar
Place the onions, cumin seeds, coriander seeds and vinegar in a saucepan over a medium-high heat. Cover and allow to simmer rapidly for 15 minutes. Add the brown sugar to the pan and cook uncovered , for 1 hour or until the onions are soft and the syrup is thick. Pour into sterilised jars* and seal immediately.
Serve the onion marmalade on sandwiches with cheese or meat.Makes 5 cups.
The marmalade can be kept sealed for up to 1 year. After opening, store in refrigerator for up to 8 weeks.


*Sterilised jars- Before putting foods into jars to be sealed and stored, the jars need to be sterilised. Sterilise the jars by by thoroughly washing in hot water. Let them dry naturally. Do not dry them with a tea towel. Place the jars on a baking tray in a preheated oven 100C (200F) for thirty minutes. Remove  jars from the oven, allow to cool, then fill and seal.
Email Post