Tempted by Jannson - Proudly made in Portugal, Batata e anchova no forno 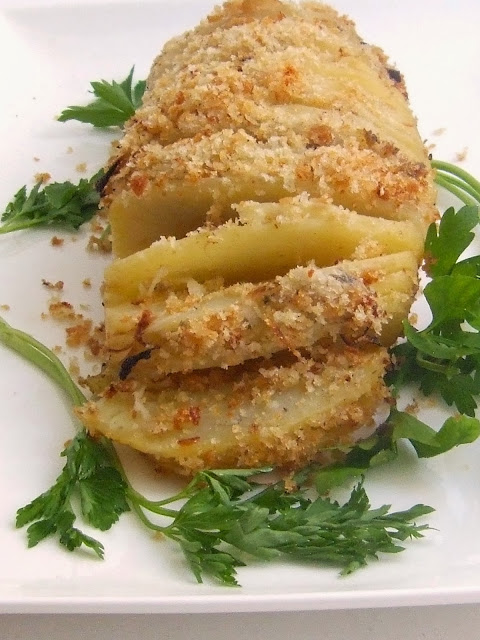 I was recently asked the question by one of our guests as to why Bacalhau is still so prolific in Portugal when its historically purposeful task was to provide long life nourishment in the days before refrigeration was an option. It is all due to the Vikings,who navigated the coast of Portugal to trade goods and ideas.Dragging home with them Portuguese princesses to marry danish kings, and more importantly,vast quantities of salt to preserve their cod.When the Vikings stopped coming the canny Portuguese,having no cod of their own,sailed the seas as far as Newfoundland to fish it.They took with them ,as the Vikings had taught them their fiel amigo( faithful friend) bacalhau.Nowadays cod is no longer fished by the Portuguese and therefore all cod products are imported,a great percentage coming from Norway and Iceland for salting in Portugal.Edite Vieira,in her book "The taste of Portugal",says she will only eat salt cod made in Portugal; she claims the flavour texture and colour are superior to all others.She must have a point otherwise why does it feature so prominently in their cuisine.There is even a recipe book with 365 recipes for their Fiel amigo - one for every day of the year.So there you have the answer, it is in fact keeping a nations longstanding tradition with cod fishing alive.The Vikings have produced many of my favourite potato dishes and so I decided to bring this long standing association of two culinary diverse cultures together with a bit of Scandinavian culinary skullduggery.Include a classic Portuguese staple, the anchovy, and the result is a simple recipe that I owe big time to Jansson whoever he was.Who Jansson was, we may never know, but this meal is an absolute must on a cold winter´s evening, standing alone as a supper dish or as a side dish to lamb.You might be put off by the inclusion of anchovies but dont be. 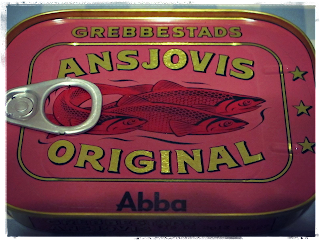 In Sweden the original with ansjovis (pickled sprats - available at Ikea) is unlikely to be served as an accompaniment to lamb which was rarely eaten in Sweden until recently, because they thought it tasted of wool!All you anchovy sceptics will be really surprised at how well the saltiness of the fish works in this dish. If the anchovies are a definite 'no', then substitute smoked salmon. It won't have the same saltiness in each bite, but the salmon can be just as delicious in its own right.This dish – originally from Sweden – is incredibly simple, but don’t rush it. It is also fantastic with freshly grated Parmesan, sprinkled over the top before you pop it in the oven.Not quite authentic but tasty.Just be prepared for some divine smells emanating from your oven, garlic and anchovies can pack a mean punch.

A simple and tasty way to jazz up a jacket potato This simple recipe transforms the humble spud into a delicious, perfect baked potato with just 5 ingredients

Preheat the oven to 200°C/fan180°C/gas 6. Drain the anchovies, reserving their oil. Gently heat half the butter in a saucepan and stir in the anchovy oil as it melts. Add the onions and fry over a low heat until they are very sweet – don’t let them brown. This should take a good 20 minutes. Once cooked, set aside.
Scrub your potatoes until good and clean.Using a sharp knife, make slices across the potato, being sure to stop before you reach its bottom. If you’re scared of cutting too far, a good technique is resting the potato in a wooden spoon. The spoon will actually prevent you from going too far!Next, open the potatoes’ crevices and with a teaspoon carefully insert dollops of the anchovy onion mixture into every other crevice,followed by some cream.When you have filled all the alternate crevices,mix bread crumbs together with the melted butter, then sprinkle over the top of the potatoes.
Bake them at 400ºF/200C for about 45 minutes to an hour depending on their size. 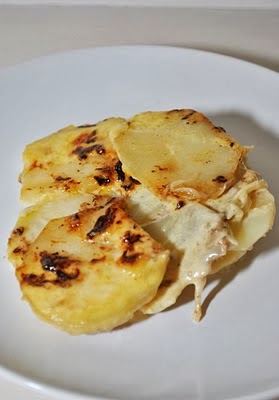 A more traditional plate of Jannson