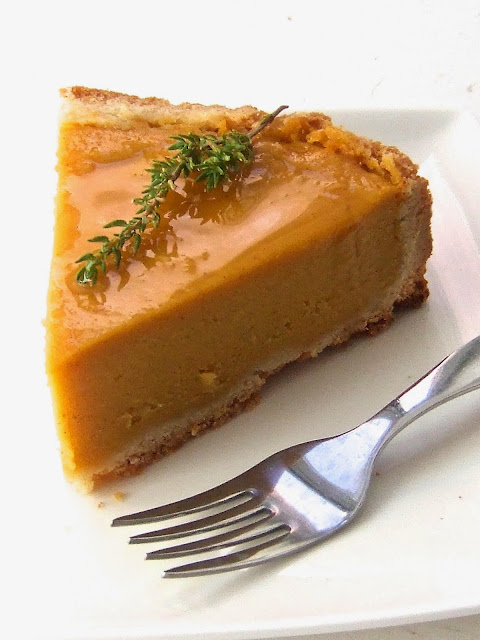 Not everybody is a great fan of Autumn like me, but when the afternoons draw in and the warm aroma of cinnamon and nutmeg waft through the kitchen its hard for anyone not to be a happy pumpkin. I have never quite got the point of that starchy sweet tasting tuber, the sweet potato,but since experimenting with a roasted sweet potato and chouriço soup I have not only become enamoured but it has become this month´s guilty pleasure.This week found me making two different variations on a theme of Sweet Potato Pie.I am not American and therefore will not be celebrating Thanksgiving ,but it does not stop me from sharing the sentiment of appreciating everything good that has happened during the year.
This sweet potato pie has the consistency of a very light mousse, with a taste much like pumpkin pie because of the spices.My two versions were one with a traditional sweet pastry crust and one more like a cheesecake without the crust.Both versions I topped with a syrup made from a local organic thyme honey.My own personal preference was for the latter.

Wash the potatoes well. In a pan with boiling water put potatoes and cook for about 45m to 55m approximately. Remove the potatoes and let cool a little then with the tip
of your fingers remove the skin, cut into small cubes and set aside.
Line a  8inch (20cm)loose bottomed pie tin with your sweet pastry chill for 20 minutes in the refrigerator and then blind bake.Alternatively follow manufacturers instructions on the packet.
Preheat the oven to 180C.
In the bowl of an electric mixer  put the cubes of sweet potato and beat at medium speed until pureed and formed a homogeneous paste. Melt butter and add to the mix. Beat for a few more seconds, then add the brown sugar and then white sugar gradually. Add the evaporated milk and add one egg at a time, allow an interval of a few seconds between the addition of each egg. Increase the speed a little and add  the spices and honey, beat for a few minutes until get a creamy texture but a little liquid (Don´t worry it will get its consistency while it is baking in the oven).Adjust the seasoning. Pour the filling into the pie shell with a spatula and flatten slightly.
( if you are making the version without the pie crust grease the pie tin and line the bottom with a circle of baking parchment.)
Bake for around 50 minutes to 1 hour depending on the oven.
When slightly cool melt enough thyme honey in a small pan over a medium heat and pour all over the top of the pie.Allow to cool then serve.
Bom Apetite! 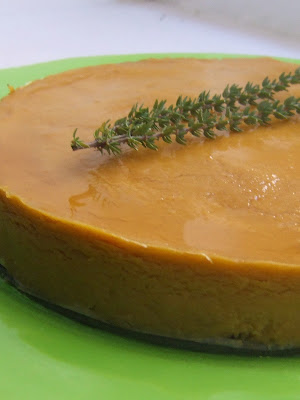