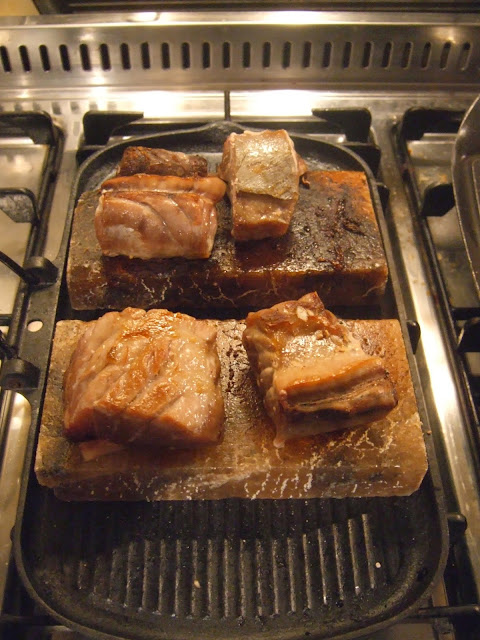 Just one ingredient and a self seasoning salt stone

A meeting of the minds, a chance opportunity and a jolly good lunch.This week envoys from Turismo de Portugal have been visiting the Algarve. A field trip representing investment, promotion, development and the sustainability of tourism.As chance would have it they chose Castro Marim as one of the stops on their whirlwind schedule.
Portugal has a special asset that few know about: Artesan food production.But while hundreds of these producers are at risk of extinction,others survive and are on the cusp of further expansion.Many people are trying to preserve this extraordinary heritage, gambling with biodiversity.These exemplary pioneers are heroes that will not allow a lingering tradition to disapppear. 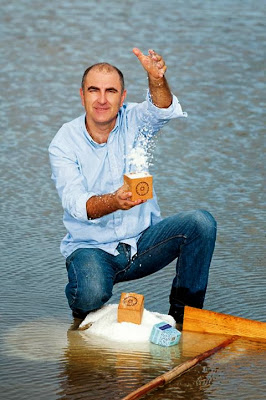 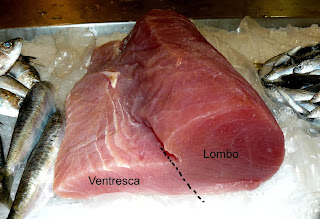 Jorge Raido is just one who has now become Castro Marim´s foremost spokesman for this trend. Turismo de Portugal were primarily here to discover more about traditional salt production, Castro Marim´s most prolific product.After the salt pan tour Jorge decided we should showcase the best of the area in the form of an informal lunch here at Casa Rosada.We were honoured to have as guest of honour and ambassador for the day Filomena Sintra, our glamorous and forward thinking new vice president of the camara ( town hall). Tuna was the focal point and round our kitchen table (extended for the day) we sat down to a starter of Muxama (dry cured tuna) and my inaugaural introduction to Butarga.Both these products are artesanally produced in Vila Real de Santo Antonio by Conservas Damaso. Butarga is the roe pouch of Atlantic bluefin tuna.It is also dried and cured in sea salt for a few weeks.Our guests tucked in to a cauldron of piping hot roast octopus and sweet potatoes ( courtesy of Noélia at Jerónimo´s) while we continued our showcase with Ventresca de atum na pedra (tuna belly cooked on the salt stone).This is the choice part of the tuna, the stomach (ventresca), which is very tender.This was also the first time the Casa Rosada kitchen has witnessed  salt stone cooking on this scale.Well our guests were all crowding round for a place in front of the cooker so they could photograph this.Having skinned the tuna and cut it into portions, at one stage we had seven salt stones sizzling on the hob.To make this possible we heated the stones on flat griddle pans and when the tuna was cooked we carefully transported the stones on cork rests to the table. 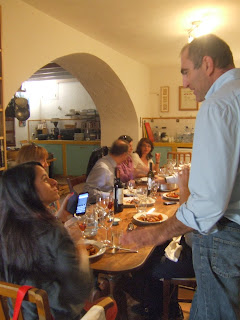 Wow, it was quite amazing and having recently had our kitchen re-arranged for a magazine photo shoot, to cater for eleven people seated close to the cooker was some kind degustational achievement,and I was quite amazed.So get you Marcus Wareing and your "Gilbert Scott Kitchen Table". Our guests did not have to stump up £900 for the experience.We ended the meal with Flor de sal caramel brownies and an almond and orange tart,and I forgot to mention the selection of Quinta de Barranco Longo wines we enjoyed along the way.Our guests left with happy memories of a lively, informal and relaxed Algarvian lunch round our kitchen table.Not only has it inspired and encouraged me as to how our cookery workshops could develop but we  made new friends and sent them on their way to their next Portuguese port of call with replete stomachs.Our great thanks to you Jorge and also to Turismo de Portugal.We hope you will return some day soon.