It has been said that juicy, delicious pork made more converts to Christianity than all the rigours suffered by the Iberican Sephardic Jews of the Inquisition. The flesh of the pig, of course, was forbidden to both Muslims and Jews, but many faced with forced conversion or expulsion, ate it to prove their adherence to the new faith. I might add that I myself opted for the reverse form, converting from christianity to pig eating indulgence. Unlike cattle ,which require good grazing land, pigs are not particular about what they eat, so they can be raised on almost any terrain. They can even grow fat on table scraps. Also 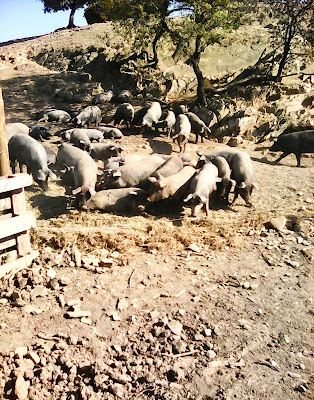 because of the animal´s fat density, pork more than any other meats, lends itself to preserving by salting, smoking, or curing, some things that must have been a boon in those bygone days before refrigeration.T he winter matança de porco, pig butchering, is a tradition in the border region of Spain and Portugal. The entire family participate in the butchering and preparation of sausages and hams. The work goes on for two or
three days, usually under the supervision of a skilled butcher.
The Pig-Slaughtering tradition Is rooted In sustainability. This age-old way of surviving the winter is getting some new attention from foodies worldwide. It's called a matança — literally, the killing of a pig. Matar means 'to kill' both in the Portuguese and Spanish language but the word 'matança ' actually refers to the whole process that takes two to three days It's an ancient ritual in danger of dying out, amid an influx of commercial abattoirs and modern supermarkets. But in the Guadiana region of the East Algarve one traditional breeder, Rui Jerónimo, is now getting renewed interest from farm-to-table food enthusiasts. The whole family and community is brought together, participating in the butchering and preparation of chouriços, hams and other products. Intestines and stomach are cleaned and put to soak to be used as sausage casings. 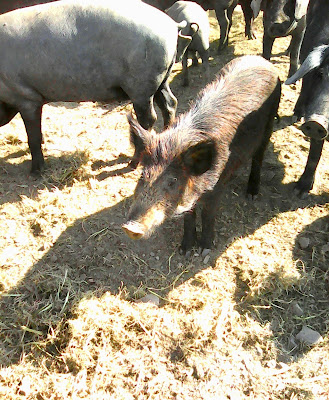 Once slaughtered the pig is cut up, hams, shoulders, fat back, bellyfat, loins, ribs, cheeks and ears removed. Meat is ground for sausages, seasoned with garlic and spices, stuffed into the natural casings and then hung up in the smoking room. Fatty skin, slowly rendered down, yields banha or lard which is packed in containers to make a years supply and torresmos, crispy fried crackling, a real treat. Lured by these delicacies, those among us who want to know the provenance of the food that comes to our tables are now making these empty green hills a new destination. Here at Casa Rosada we want to see how the pigs live, and for that matter know how they die, so just before the last slaughtering of the season, which is normally in early April, depending on the weather, I took a trip up the river and returned to Zambujal.
Trips to Zambujal are inspiring, the drive through the serra encourages a sort of I spy inyour head with the nature that you pass at the roadside. The mimosa, the cystus or esteva, malva sylvestris or common mallow, Milk Thistle (cardo mariano), Black Mustard (Brassica nigra) is another very common plant that often grows as a weed in waste ground, along roads, and anywhere its seeds have fallen, with their distinctive aromas. There is also sorrel in many lanes, wild varieties of mint, borrage, dandelion, wild lettuce, fennel..We stopped on our journey to climb down a bank and pick river mint. Portugal is a real feast for the eyes in springtime because of the amazing diversity of wild flowers that come into bloom, not forgetting the trees and shrubs. And it is not just the nature, it is as much about the remote little villages you drive through with their traditions and a surviving folklore that is in the radar. 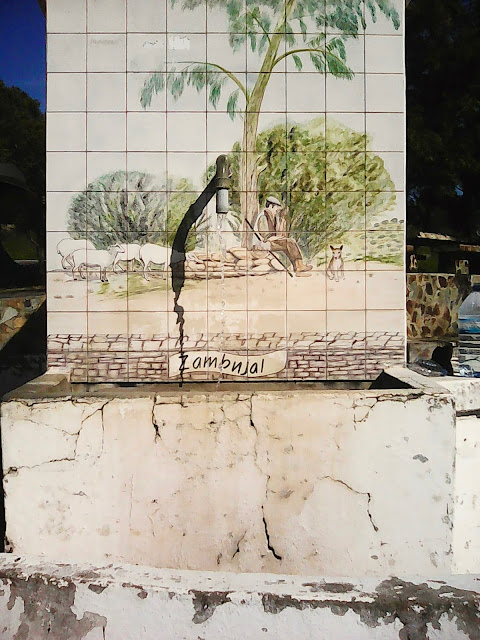 "You can see the future in the past. It's lasted thousands of years and is therefore sustainable."

Since medieval times, many rural Portuguese families have raised pigs for domestic consumption. People in the countryside have remained self-sufficient, providing for their own vegetables, fruit and meat.  Because the activity of pig slaughter has been practiced over many centuries, nowadays, the pig and its meat have become part of a national identity.
But the slaughtering of a pig is more than just for providing food, it is also a social happening, where families, neighbours and friends, villagers get together in a spirit of mutual help and celebration.  The spirit of helping is very strong, and a family that receives help from the neighbour, friend or family, later will return the favour in other similar activities. The exchange of favours is a very traditional practice, still alive, going far beyond the slaughtering occasions and involves other products not just pork meat. Even nowadays, many people in  rural Portugal uphold this old tradition with local festivals.
Raising a pig is not an expensive activity, because this animal eats all kinds of food scraps, fruits and other sub products.  In the old days,  breeding a pig for household consumption was the only chance to eat meat during the winter, except in special times, when the families used to consume chicken meat and lamb.  The economic value of this animal in the Portuguese culture cannot be compared to any other animal. The concept of nose to tail is adopted. Nose-to-tail eating is a philosophy of using every part of the animal from the feet to the ears in food preparation, letting nothing go to waste. ... Plus, it aims to squash our squeamishness: from charcuterie to cod cheeks, nose to tail celebrates traditionally prepared dishes that feature overlooked or lesser-known parts. Chouriço is probably the most obvious example. Lesser used parts of the pig are used to fill the sausage,and I decided to take the filling out of its casing to make meatballs.
First of all we must be very clear about one thing. Chouriço is from Portugal, chorizo is from Spain. It’s an Iberian food with the same origin but with regional differences not only the spelling. Within Portugal itself, there are several varieties – as diverse as the regions in which they are made. Its the same with meatballs, almondegas to the Portuguese and albondigas to the Spaniards. Almôndegas It’s a strange word, derived from the Arabic al-bunduq (hazelnut, or round shape). So why does a tapas dish have an Arabic name? The best guess is that these meatballs were first introduced to el al gharb by Arab or Berber peoples during the time of the Moors.
I had almost an entire jar of roasted red peppers leftover in the fridge last week, and due to poor planning, I didn’t have another use for the leftover peppers. Yes, I could have frozen them for later use, but I decided to just go ahead and use them up on the spot and not risk losing them to the depths of my freezer. And I think it’s important to show ways you can repurpose leftover ingredients to make sure they don’t go to waste. So, I made this ultra simple, yet totally decadent Creamy Roasted Red Pepper Sauce, to accompany the Chouriço meatballs. 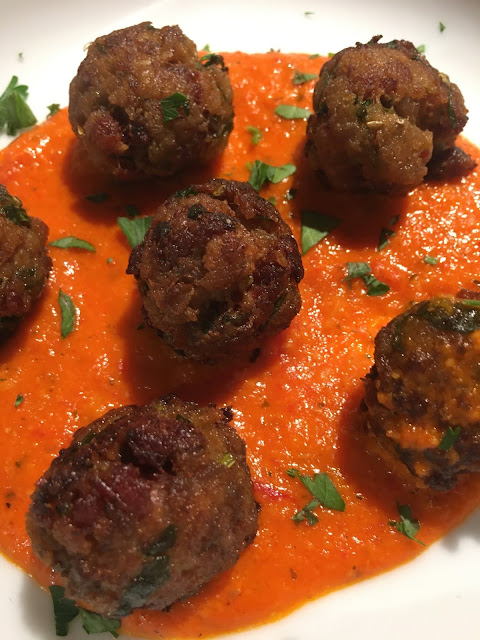 The most obvious use for this sauce is as a tomato-free alternative to marinara. It’s nice to change things up once in a while and there are a lot of people who can’t eat tomatoes, so this is a great way to go if you have a tomato intolerance.On that note, I made an amazing mediterranean style pizza (using the roasted pepper sauce as a base ). So, if you ever find yourself with a jar of roasted red peppers…

Put the pork fat, white wine, thyme and bay leaves in a casserole with a lid.
Heat gently until the fat has melted. Add the meat and cook over a very low heat covered for about 3 hours or until the meat is completely tender. Remove the lid.lift the meat from its juices and on a chopping board very finely shred the meat and fat with two forks. Pack tightly into ceramic or eathenware pate dishes or a china terrine; alternatively you could use individual ramekins. Strain the cooking liquid and residue from the casserole, through a sieve over the rillettes and mix lightly. Leave to cool,then refrigerate till the fat on top has set to form a coating.
Email Post