Sharp as a knife,a clam in a pan. Welcome to our world

If you´ve had to postpone your travels because of the pandemic, I believe a weekly dose of travel dreaming can be good medicine. Here’s a reminder of the fun that now awaits you on the other side of the crisis. Its called the East Algarve or as us locals call it
Sotavento (the leeward side).
Picture this. Its Saturday and I was ready to just sleep in. An old fishermen rumbling into the village tooting an overture on his vintage motorbike as he rattles along the uneven cobbles of our narrow street touting his wares, his pannier as if it was straight off a horse, very little different to how it would have been in his youth over 70 years ago. Bawling out a repeated phrase in an indistinct Portuguese dialect, a secret code perhaps only understood by the locals who have bought his wares since way back when. Groggy yet happy, in my confused state I get dressed and prepare to embrace the commotion, as another of the last true signatures of true Algarve village life is just around the corner. The presence this time is being heralded by a distinctive tune being played on pan pipes. 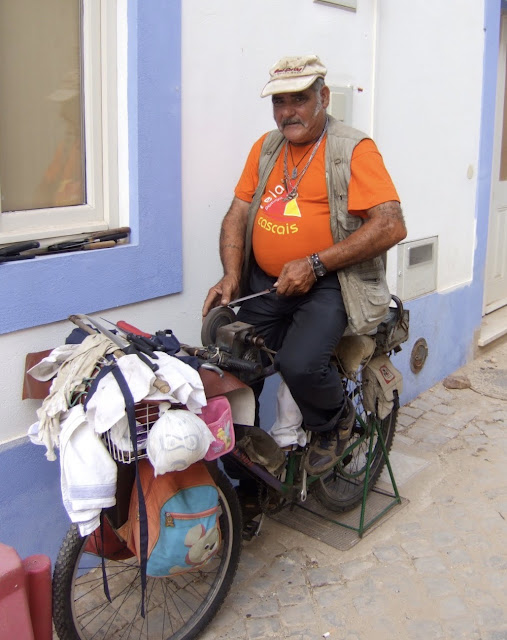 Amolador is the Portuguese word for grinder, or knife sharpener. Knife sharpeners (Amoladores) in Portugal drive around town on bicycles. Announcing themselves with a signature tune on their whistle, and then sharpening your knives with a grindstone they hook up to their bike. That whistle music is so traditional and recognizable that once you hear you won't forget it. Sadly it's something that it's dying out. Their bikes serve as a mobile workshop, with a sharpening stone mounted on the top tube, a tool box strapped to the back, and sometimes umbrellas which they also repair draped over the handlebars. Apparently there used to be many amoladores, but with the advent of cheap knives and scissors it's a dying profession which is too bad because it's very meditaive.I found a popular portuguese saying, "quando há amolador, há chuva": when the knife sharpener is around, it's going to rain.I hope not, as today I want to go to the beach.
Still a sleepy village, but only barely, Castro Marim has a split personality: The rambling old town is for residents, and the more utilitarian other half was perhaps built for tourists or utilitarian expat holiday homes.

Any place that’s famous as a “last undiscovered tourist frontier” probably no longer is. But the Algarve of our dreams survives here, well most of the time. Bem vindo ao nosso mundo,  Welcome to our world....... 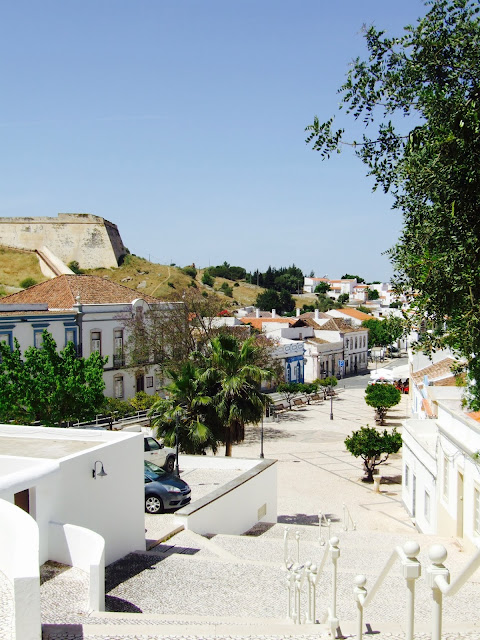 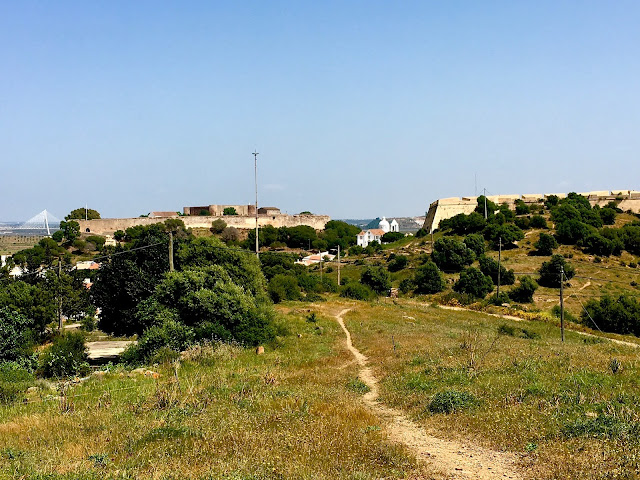 Set in the crook of a rolling seasonally green landscape and wetlands  overlooking the broadening estuary of the river Guadiana is the timeworn village of Castro Marim. Just a stones throw away  bikini-strangled and Nivea-creamed beaches straddle the Atlantic Ocean where residents and tourists pursue a policy of peaceful coexistence at the beach, luxurious with powder-fine sand and bordered by rolling sand dunes.Youngsters toddle in the waves, while topless women flick the pages of Grazia, Freundin  Bild der frau, Bunte or Hola, and old men in the shallows look like they are rehearsing the limbo but are in fact cockling. British and Northern European connoisseurs of lethargy laze in the sun, while locals grab a bit of shade from their chapeu-sol.
While the days of black-clad widows chasing topless Nordic women off the beach are long gone, nudity is still risqué. Over the dunes and beyond the view of prying eyes, exhibitionists of assorted nationalities and of a certain age grin and bare it.
Tourism chases the sun and a quaint folksiness. And the folksiness survives only with the help of much welcomed tourist currency. Locals boost their income by renting spare bedrooms (quartos) to the ever-growing stream of tan fans from Europe’s drizzly north. Secret undeclared quartos hidden in untapped arteries, offer simple rooms with showers, and springy beds.
Just across the natural border with Spain, Castro Marim has been strategically important throughout history. As far back as Roman times the river here was used to mark the boundary between what was then Lusitania and Baetica, which were to become Spain and Portugal respectively.
As darkness falls, above you swathed in a warm spotlight is O Castelo. 500 years ago, it was the edge of the world. An important moment in the history of this village was the 7th of July 1640, the day when the judgement of the kingdom's governors who recognized Philip II as king of Portugal was proclaimed. The judgement was drafted in Ayamonte, but only in Castro Marim was it made public. 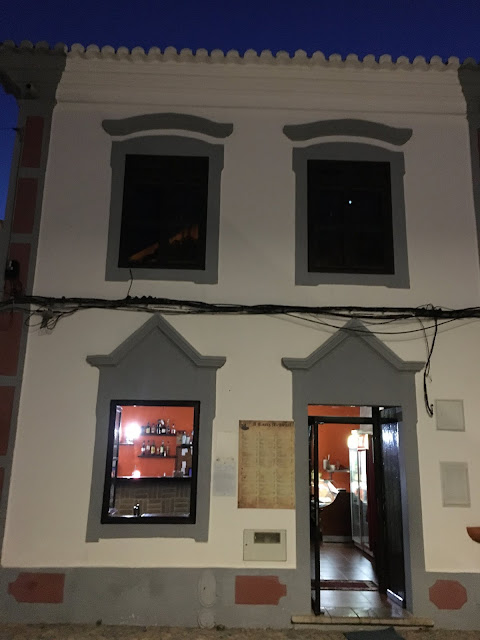 So at the end of the day, after enjoying a nice refreshing shower, I take a glass of red wine then venture out to the local hostelry, A Tasca Medieval ,for some quintessential Portuguese cuisine. According to some Portuguese locals, if you were to represent local cuisine with just one dish, then that dish would have to be the cataplana, and what a remarkable dish it is too.
It is well known that the cataplana originated in the Algarve. There are two main theories where it came from, the first and most widely spread is that it came with the Moorish occupation of the region back in the late eighth century. Some believe that it is the Portuguese equivalent of the tagine from northern Africa, and it has more than just a similar cooking process; both dishes also have whatever is made inside named after the vessel they were cooked in! The other, and less heard  theory ,is that it was made by a Portuguese metal craftsman specializing in copper and stainless steel named Armando
Luz (1927-2002).I go with the original theory.
Traditionally the cataplana was made out of beaten copper in the shape of a clam shell, this made it easy for hunters and fishermen to fill it up with the essentials like garlic, onions, olive oil, and the vegetables of the season to take with them in order to cook their fresh game and catch right there over a fire, be it just off a boat or out in the forest. The cataplana would act much like a pressure cooker in that it would steam the fresh food inside, locking in the flavours and juices while cooking. This made the process fairly quick, without too much extra effort other than throwing everything into the pan and letting it simmer away. 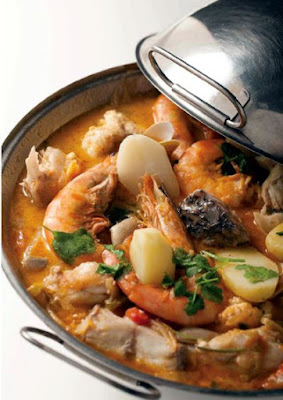 First wash the clams and soak them for 2 hours in cold water seasoned with salt. Dice the pork,ham and bacon, if possible all the same size. Season with salt. bruised garlic,paprika,a glass of red wine,bay leaf and chilli. Stir well and leave to marinate for about 3 hours. Peel the onions and cut into thin half moons. Heat the olive oil and lard in the bottom of the cataplana until melted completely. Add the onions, and lower the heat.When the onion is transparent add the marinated meat, the clams drained and rinsed, prawns, chouriço, the parsley and coriander. Close the cataplana and bring to a medium heat and cook for about 25 minutes. Adjust the seasoning and serve immediately.