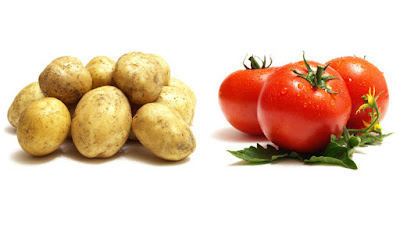 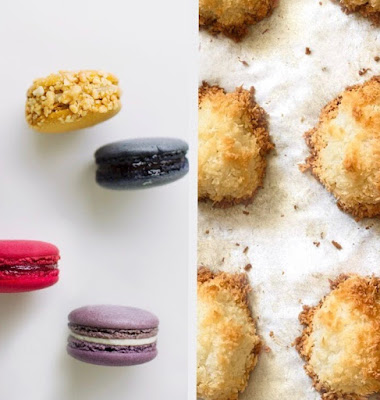 "macaron" or "macaroon"
Aside from both being delicious and similar in spelling,
macarons and macaroons are entirely different
First off, a macaroon is coconut based,
whereas a macaron is meringue based.

You´re sitting in a restaurant, the waiter approaches, you´ve decided what you want to order but you don't quite know how to say it. You anxiously stutter what you think could be the correct pronounciation, only to be left feeling embarrassed when you're corrected. We´ve all been there. It’s hardly surprising when menus these days are such a tongue-twisting minefield; our tastes might have become more cosmopolitan, but our language skills are still struggling to catch up. The problem is, even if your pronunciation is perfect, that doesn’t mean you will escape being chastised for being a clever clogs. I would never correct people who mispronounce a word. It might just be their accent or a regional dialect that is making it sound wrong. Do you pronounce 'scone' to rhyme with 'cone' or 'gone'? It depends where you're from. The Scots seem to have a problem with the 'oo' and 'u' sounds. For example, 'fud' for 'food' but 'bootcher' for 'butcher'. Why this inconsistency? In fact, u's right and oo's wrong? On the TV series  Masterchef a contestant pronounced chouriço as Choritzo. The fact that it materialized she was Portuguese came as quite a big surprise. I myself feel so awkward uttering the Castilian "th" that I end up mumbling the word incoherently into my menu (it's choreetho or choreeso, not choritzo) .Chorizo(same word as in spanish) is pronounced just as it is written here in Portugal, if you try and pronounce it with a cod spanish accent they will think you are a dickhead. Whether it is wrong to hurl a bread roll at the television screen when food words are mispronounced is a given. It is very important for food professionals to say things correctly, For broadcasting professionals especially, a mispronounced word can become common parlance, and the integrity of the word can be lost. I find sometimes that the best course of action is just to mumble. If you are in a Chinese restaurant, for instance, and there is an egg-fried rice that looks like it is called ‘fuk yiu’, just mumble to avoid embarrasment. I remember having just come out of a  restaurant in San Francisco´s China town with a carrier bag labelled "wee can fuk", I looked across the road and obviously keen to compete was a restaurant called "wee can 2", the entrepreneur would probably open a third called "so can wee."
On an easyjet flight once when I asked what sandwiches were still available the stewardess launched into a tirade in a broad Scottish accent "cream cheese roasted vegetables fockya". I beg your pardon I replied!!! So which food words do you struggle to pronounce?I  remember when I realised ‘scollop’ was pronounced ‘scallop’ (mainly because it is spelled that way)– it gave me a real anxiety.‘ Physalis’ Is something else I struggle with – I can barely remember the name, let alone pronounce it, Mind you, it’s one of those ingredients that turns up on plates where it’s not needed, so it can be safely ignored anyway. The Americans are by far the worst offenders of mispronunciation. Americanisms are top of my pet hate list. Why cant they pronounce food words correctly? They pronounce the word Herb without an "h" bayzil is an erb apparently and it "flavors" dishes such as Rizoto when you are short of cee-lann trow or roo-cola not to be confused with that brand of swiss herbal sweets Ricola.
So here are some of the obvious offenders

Aïoli, alioli  (“ay-OH-lee”; “i-OH-lee”)( "al ee-OH-lee”)
Bruschetta The universal cue for Italian waiters to roll their eyes in despair. "ch" in Italian is pronounced "k", so it's broo-sket-tah – not, not brooshedda.
Most people say ‘bruschetta’ with a soft ‘shh’ ( a fairly easy mistake to make).
Ciabatta (Cee-baht-tah) ("chah-BAH-tah")
English speakers tend to add in an extra syllable, and say 'tchee/ah/baht/tah' which is incorrect.
Daube (Dohb not Dauhbb) Southern french dish of beef braised in red wine
Edamame (“eh-dah-MAH-meh”) When these immature soya beans crossed over from east-Asian cuisine to stud salads in your local supermarket, it led to a spate of mispronunciations. I utter "HELP" with this one!!
Fricassée  (free/kahs/say ) a ‘fricassée’ is a type of white ‘ragoût’ or stew.
Foccacia (foh/KAHT/tchah) not Fockya.
Gazpacho (gaz/pah/cho ) not Gestapo as I once heard
Gnocchi (nyawk-kee)
Herb High on my pet-hate list is the the North American pronunciation of herb without an "h". Eeuugh. Some experts, however, insist that it's not an Americanism, because the h was not pronounced on either side of the Atlantic when the colonies were settled. This fact does not make me cringe any less when someone describes basil as an erb.
Niçoise ("nee-SWAHZ") the most common abomination, salad nicosia
“Maccheroni”  What’s that, you ask? Why, it’s the Italian word for what you call “macaroni” – and it’s pronounced just about the same way!
Mascarpone ("mas-kar-POH-nay; mas-kahr-POH-nay")
Pappardelle (pahp-par-DEL-leh) not dissimilar to rap artist Pappa Dell
Parmesan ("PAHR-mee-zahn")
Potage (poh/tahzh)
Prosciutto (proh/SHOOT/toh) not prosecuto  nor pross/a/quitto
Quinoa (keen-wah) The new Queen of the grains demands proper pronunciation.
Ricotta Why do so many US TV chefs mangle the word for the Italian cheese by pronouncing it rigoata? Why? It is pronounced pretty much as it is spelled: ree-cot-a.
Risotto (ree/ZOAHT/toh Please not RIZOTO
Tuille You pronounce it tu-eel (you are allowed to relax your lips after the first syllable. And try to run the two syllables into one another a little.
Restaurateur (“rehs-tuhr-uh-TOOR”; “rehs-tuhr-uh-TUHR”) commonly  mispronounced
Sriracha Admittedly this Thai word is tricky, but watch this short clip about the cult spicy sauce and you'll never be confused again. Say it: see-ra-cha.
Turmeric Mmm. There is division about whether the bright yellow spice is pronounced tur-mer-ik or too-mer-ik. I say the former, but whatever it is, it's not choomerick.
Tzatziki ("dzah-DZEE-kee")
Vol au vent (vohl/oh/vauh)
Vichysoisse  (vee/shee/swahz)
Vinaigrette (“vihn-uh-GREHT”)
Worcestershire (“WOOS-tuhr-shuhr”; “WOOS-tuhr-sheer”)