5th May:Dear diary We have now transitioned from a state of emergency to a state of calamity.A beautiful sky, a wonderful day, Whip crack-away, whip crack-away, whip crack-away.
There is no `R´ in the month of May so we can now safely eat sardines.The streets will soon be filled with that distinctive smell of grilling again,but we must still wear our armour (a máscara) in public places.So as well as sharing a sardine recipe with you I want to share what I thought was one of the most joyous pieces of journalism to come out of lockdown:it conveys the spirited moment of one indestructible nation leaving the chrysalis.For Portuguese readers just click on the link but for the others of you I have done my best to translate without losing the nuances of the piece.For those of you familiar with Lisbon and some of the locations mentioned the piece will be more emotive obviously.If you are in need of the sardine recipe skip the article and proceed to the recipe.

Lisbon returns to the street in slow motion

This is the anxious moment in which a certain normality is resumed. With a mask on their faces, queues at the door and some skepticism, fabrics, scissors, books and underwear are the most sought after.

And suddenly, a long line breaking the monotony of a city with almost no people. About fifteen people line up at the corner between Rossio and Rua do Ouro while waiting for a sign allowing them to enter the Feira dos Tecidos, the most popular store in downtown Lisbon at 11 am. Why is there so much interest? Customers want fabric and elastic to make masks.
Cely is one of those waiting. He brings a mask to match his tunic, a bold coloured African pattern. He comes to stock up so he doesn't have to return so soon. “We have been buying online and it is much more expensive. Both the fabric and the elastic, which can't be found anywhere, ” he says, taking out his cell phone to show the masks his studio has made. "I have several, I don't only have African ones."
He came from Massamá on purpose to Rossio because he knew that the Feira dos Tecidos would reopen this Monday, like so many other stores, now that the state of emergency is gone. In Baixa and Chiado, however, there were many doors that remained locked in this first day of relaxation measures.
“I don't even know how to open the store anymore!” Laughs Alfredo Ricardo, the manager of the haberdashery Alexandre Bento, Lda., At Rua da Conceição, where the neighboring haberdasheries are also preparing to open doors. Since March 17, he has not known what it is like to be behind that counter selling buttons, threads and a thousand and one objects for the art of sewing. "They have already called from home to ask for certain lines," says the businessman with a shrug.
This account is not alone. By 8 am, Cais do Sodré does not live up to being its normal status of the busiest transport interface in the city. Trains do not bring a lot of people, neither do boats and buses now running withjust  half a dozen people.
“My  friend, this is not valid”, warns a policeman to a man who is preparing to board a tram with a scarf around his face. The policeman hands him a mask, which he reluctantly puts on, and leaves a warning: “Look, tomorrow we are no longer distributing masks. Tomorrow the story will be  different. ”The stock of 1900 masks that the two police officers brought to Cais do Sodré will not run out. “I expected more movement”, comments one of them, “this has been very calm.” Since they arrived there, at 5:30 am, until around 9:00 am, only one Carris passenger did not wear the mandatory mask and received one. Inside the train and metro stations, PSP agents watched every face.Those unmasked women were advised to turn around.

The beard is home made

Shortly after 10 am, Pedro is the second client of the KBelos hairdresser, at Rua dos Correeiros, which has just reopened. “It really had to be,” he says, without taking his eyes off the mirror where he controls the clippers as he cuts his clients not too long hair. The salon opens at 8am as a rule, but due to legal imposition it has reduced hours, which makes it difficult to fit in appointments. “We can only meet one person every hour or hour and a half, it depends on the job”, explains one of the hairdressers.The more stark interior of  the Pais Room, on Rua do Forno do Tijolo, does not suffer from the same problem. The barbershop was bustling all morning. “For the time being I don't offer the  shaving option,” says Júlio Pais, 53 years old, with a visor on his face while finishing another client's hairstyle.He is not perturbed by this accessory, but his daughter Ivone is. "This is horrible, we are working with the cloudy sky", he jokes, exhaling with a little more force into the mask and proving that his glasses always fog up. “We never close the door. We take holidays in turn so that the shop never closes, this was the longest period ”, says Ivone Pais, 36 years old. "I never thought it would be that long," says the father, explaining that they decided to close the salon a few days before the state of emergency came into effect, which prolonged the absence.
On board the notorious and charismatic tram 28, you have a panoramic idea of ​​how the relaxation measures came to Lisbon in slow motion. The vehicle itself, although more composed than in recent weeks, is far from pre-covid influx. In Graça, the movement in the streets is similar to that of the closest days, since the trade is almost all food, lotteries and tobacco and, therefore, it did not close. Portas do Sol, a tourist site par excellence, keeps silence and phantasmagoria. In Baixa, Chiado, Calhariz, Calçada do Combro, Estrela and even in Campo de Ourique, the impression is the same: Lisboners have not yet returned to the street.

Briefs and books, the basic necessities
Pedro Castro e Silva, manager of Livraria Sá da Costa, in Chiado, hopes that normality will not take long to appear. “It was already costing us to be closed. Let's see how this will evolve, ” he says. He and an employee are taping the floor to mark the distances that customers must keep. “We are sailing in unknown waters. If unemployment figures are what we have been told, it is necessary to understand what effect they will have in the medium and long term on the economy ”, he reflects.For the bookseller, who in a few hours would be receiving a visit from the President of the Republic, this is perhaps a good time to liven up the business. “The book,reading, is almost a basic necessity when it comes to isolating. Many people started to exercise during confinement, I hope that many have now started to read or have the curiosity to read.”Whether they want books or not, time will tell, but for now some Lisboners seem to need underwear. Let it be said by Sandra Fernandes, who had barely opened the door of her clothing store on Rua da Palma when a customer came to inquire about the price of underwear. “A liitle while ago we thought that in 15 days this would improve, but it’s not bad. We can't go to Ramiro to eat yet, but business is ticking over. ”During the morning they sold sheets, towels, underwear and socks, which they consider to be a side effect of confinement. “My husband says we are going to sell a lot of pyjamas”, jokes Margarida Dias, who starts to debate with Sandra about the advantages and disadvantages of this garment during a long stay at home. "I have the impression that more customers have entered today than before the state of emergency," says José Lopes Fernandes, the owner of the shop, who in the olden days used to sell coffee.
Back in In Rossio, in the middle of the conversation with Cely, the woman behind him says that she also came from Massamá and they start exchanging points of reference. They don't know each other, but they seem to agree. "By the end of the year, this is going to be very weird." 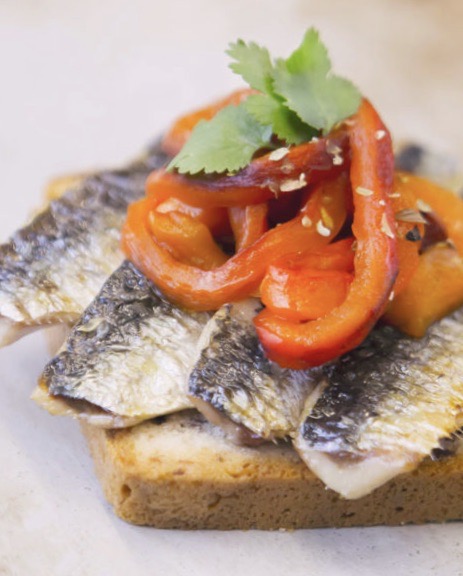 2 sweet red peppers
2 tbsp olive oil
8 large or 12 medium sardines,gutted, cleaned and scaled
1 dessert spoon Flor de sal
1/2 tsp freshly ground black pepper
pinch of cayenne pepper
a little extra virgin olive oil
1 lemon quartered
Coat the sweet peppers with some of the olive oil and grill, turning occasionally, until scorched and blistered all over.Peel off the skin and cut the peppers into long strips, discarding the core and seeds.An alternative method if you want to get ahead and do it the day before is to roast the peppers in the oven till they are blistered and charred.
Brush the sardines and the grill with oil to help prevent them sticking.Roll the sardines in the sea salt,pepper and cayenne,set aside for at least 30 minutes.
Grill or barbecue lightly on one side,then turn the sardines while they are still firm enough to be moved without breaking up. Grill or barbecue on the other side until the until the skin is scorched and bubbling.
Arrange the grilled sardines and peppers on serving plates.Add a drizzle of extra virgin olive oil and serve with a wedge of lemon and salad on the side.
Email Post