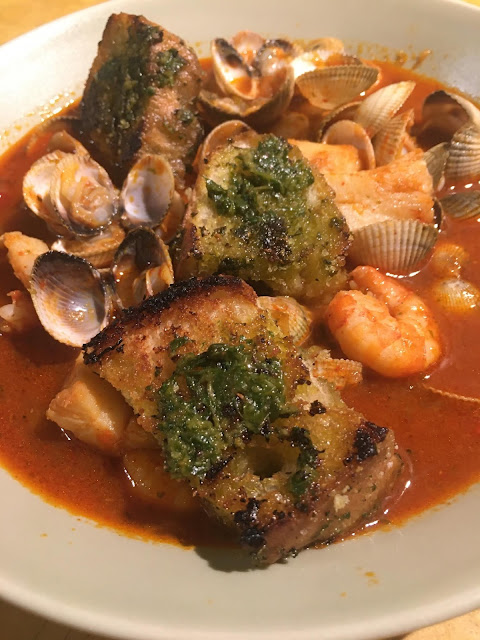 Red Romano peppers also known as Ramiro peppers and Sweet Pointed peppers are native to the Mediterranean region, specifically Italy and Spain, and have been cultivated for hundreds of years in warm, temperate climates. The variety was created through selective breeding of original pepper varieties introduced from the New World in the 15th and 16th centuries. Today Red Romano peppers are still widely popular in the Mediterranean and can be found in restaurants, local markets, and home gardens throughout Italy and Spain, being widely used in both fresh and cooked applications, especially for roasting and stuffing.When I am lucky enough to find them here in the Algarve I drop everything I had planned to be cooking in favour of them.
Rich seafood soups are a Mediterranean specialty, made with fish and shellfish that are readily available and inexpensive. They typically include fish heads that add flavour, and the cheeks, which are considered a delicacy. I consider myself pretty adventurous in the kitchen and I have cooked fish heads (possibly only once) but I don’t feel the need to do that again.
What better way then to celebrate the end of summer and seasonal produce than a rich unctuous seafood and shellfish soup, made with romano peppers, halibut, berbigao (baby clams), cod cheeks and prawns. Serve this with some crusty croutes and you have yourself a complete meal.

The result is a brick red broth coloured by red roasted peppers, thick with cod cheeks and clams. With  some gremolata topped croutes, it forms a deliciously perfect late summer supper.The cod cheeks were cheap and sustainable, but also held their firm texture well. Each clam was a tiny treat to be picked up, the shells holding not only the little clam, but a delicious piscine puddle of sauce.
How to make a different version of the traditional Gremolata recipe?
Stranger things have happened but I found my herb cache sans parsley, so I had to find another way to make a gremolata that respected the spirit of the recipe, but with herbs that I love and had available! This is the recipe I came up with. I hope you will like it.


1 lemon ( zest)
1/4 cup olive oil
2 garlic cloves
1/2 cup fresh cilantro
1/2 cup fresh basil
1 cup home made breadcrumbs
¼ cup grated parmesan
1 tsp flor de sal and pepper
If you have a food processor, pulse the garlic until minced then add the basil and lemon zest and pulse until finely chopped. If you do not just mince everything by hand  first separately and then together.
Heat olive oil in a large skillet. Add breadcrumbs and toss to evenly coat in olive oil. Cook over med-low heat, tossing frequently until golden brown, about 5 minutes. When just about done mix in the parmesan and a dash of salt and pepper.
Let breadcrumbs cool on a paper towel lined plate.
Mix everything together just before eating - once mixed the gremolata should be stored in the fridge and will keep 3-4 days. To re-toast the gremolata, heat up a little extra olive oil in a pan and cook over low heat for 5-7 minutes.
Cut remaining garlic clove in half and rub the cut sides on the toasts. Spread the gremolata on the toasts.
THE TRICK
You can make this a day or two in advance - once you have toasted and cooled the breadcrumbs keep them in an airtight container on the counter and keep the basil lemon mixture in the fridge, mix everything together just before eating. 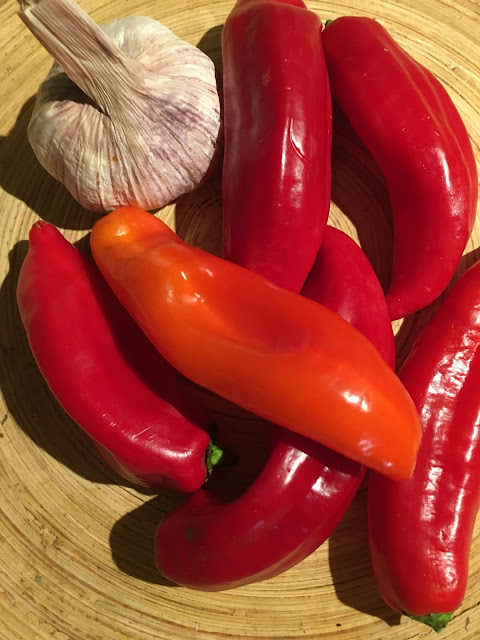 Roughly tear a couple of thick slices of bread into bite-sized pieces, fry them for a minute or two in shallow olive oil, then set aside on kitchen paper. Sprinkle with salt and offer them at the table, together with a bowl of garlicky alioli. Serves 4

For the alioli:
roasted garlic half from above
egg yolk 1
groundnut or vegetable oil 200ml
olive oil 150ml

Set the oven at 200C/gas mark 6. Lay the peppers in a roasting tin, pour over the olive oil, then turn the peppers so they are evenly coated. Tuck the whole head of garlic among them, then bake for about 45 minutes until the peppers have softened and collapsed.
Peel the prawns and remove their heads, then put the shells and heads into a medium-sized saucepan. Trim and roughly chop the leek (I leave all but the very tips of the leaves on) then add it to the prawn shells with the bay leaves, peppercorns and the parsley stalks. Set the prawns aside. Pour a litre of water into the pan, bring to the boil, then lower the heat and simmer, partially covered by a lid, for 40-50 minutes, to make a stock.

Advertisement
Remove the garlic from the roasting tin. Peel the cloves, squeezing the creamy flesh out of its skin. Set half aside.
Make the aioli: crush the remaining roasted garlic to a paste, then add a pinch of salt and an egg yolk. Beat in groundnut or vegetable oil, slowly at first, a few drops at a time, then introduce the olive oil. It is ready when thick enough to spread with a knife.
Sieve the stock, discarding the shells, vegetables and aromatics. Next, pour the stock into a blender, (taking care not to fill it more than half-way), add the peppers and the reserved half of garlic, then blend to a smooth, thin purée. You will find you probably need to do this in two batches.
Pour the stock into a large saucepan and bring to the boil, then add the cod cheeks prawns and halibut, lower the heat and simmer for 7-8 minutes until the cheeks are tender. Meanwhile, wash the clams in cold running water and check each one for any cracks in the shell, discarding any that are open or refuse to close when tapped on the side of the sink. Be scrupulous about this. Add the clams to the soup, cover with a lid and leave for 5-6 minutes until the clams have opened.
Serve with the croûtes and alioli.
Email Post