Late summer,a pudding for all seasons

Why, you say, am I posting this wonderful recipe in mid September when it should have been at the end of June? Well I will tell you why. Firstly I've always been intrigued by this archetypal dessert. Secondly in a long suffering nod to climate change and a homage to the Englishman´s stubborn love of stodge, this pudding can adapt beautifully to the change of weather and the seasons. Did mushy peas ever taste sweeter out of season than accompanying a plate of chips at the Flora Tea Rooms on a windswept beach in Dunwich, UK? I rest my case.

England bestowed the designation "summer pudding" upon this determinedly solid dessert at a time when soft fruits were only available in the summer months. I have never been a great exponent of  frozen foods when one can source fresh, but in these days of high tech white goods these fruits of our labour can now be picked when in season and frozen until ready to be used for an "autumn pudding". I do recall my mother having actually served a "summer pudding" on Christmas Day to a family not so partial to that other quintessential English classic, the "Christmas pudding". Of course, I can’t begin to make something without first doing a bit of research.  All recipes, no matter the country or the culture, originated out of necessity …. using what was in season, as well as using up items that might already be in the kitchen (before they go bad).  It seems to me this recipe originated for both those reasons.  The ingredients are very simple, seasonal berries, stale bread and some sugar for sweetening.(To digress briefly, bread puddings have been around for almost as long as stale bread but, according to the invaluable Oxford Companion to Food, this particular cold confection first pops up in the 19th century, when they were popular at pastry-phobic health farms – under the strikingly unappealing name, hydropathic puddings. Suddenly, "summer" seems a little more apt, doesn't it? ) Because it was deemed “healthy”, it was routinely served to patients in nursing homes and hospitals, as well as to those staying in “health spas” wanting to shed a few pounds.  Is it healthier than other desserts?  I’ll leave that for you to decide. However this old-fashioned and peculiarly British pleasure – a solid lump of stodge designed to be enjoyed when berries are at their world-class peak, can, when well chilled and sodden with wine-dark fruit juices, be a surprisingly refreshing repast, and exhilaratingly thrifty as well – the perfect home for that stale loaf and those end of season over-ripe berries going cheap at your local Lidl.This pudding is all about the fruit. The bread exists merely to give structure to the fruit. Much of the success or otherwise of the final pudding is to do with the quality and structural integrity of the bread  As we drift into the season of mist and mellow fruitfulness, a good autumn version can be made with the addition of apples. Yes my dear mother taught me that by introducing them into the equation they added a bit of texture to what its critics might term "an inverted pyramid of piffle". Blackberries, damson, plums, and elderberries too bring a bit of autumnal feeling to the table. A little port, sangria  or red wine in the simmering helps to ensure the optimum amount of extra juice.I even remember once using a cheap Pandoro instead of bread. Slice the top off, invert in the bottom of the bowl and then arrange slices of the ridged cake sides around the bowl sides. The vanilla in the pandoro adds to the flavour of the pudding.Before I forget I must also mention two glorious savoury versions with tomatoes,basil and beetroot that the Two Fat Ladies and Sophie Grigson created respectively.I want to use the "heart" emoji here, but the interface of this apparently "world beating" blog wont allow me. 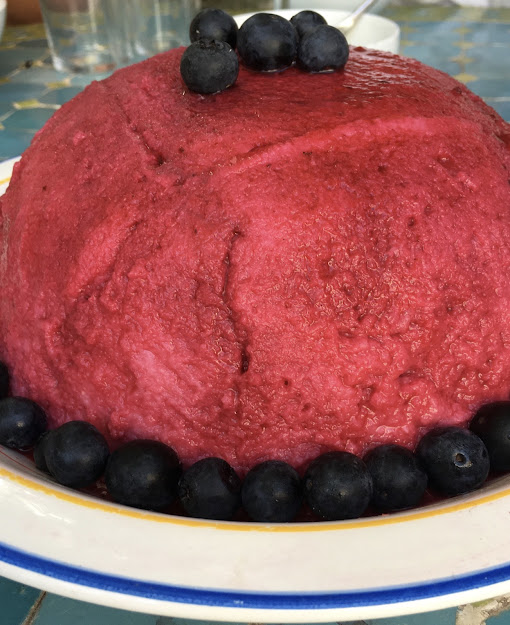 Put the strawberries,raspberries redcurrants damsons, plums, blackberries, apples, blueberries or whatever fruit you are using, and sugar in a heavy-based saucepan over low heat. Heat gently and briefly - no more than 3-4 minutes - until the fruit begins to bleed and the sugar is dissolved. The fruit must not lose its shape or start to cook.
Line a 1-litre pudding basin with slices of day-old good white bread. Make sure there are no gaps.Taking some of the cooking juices from the fruit generously paint the bread lining the bowl.  Using a perforated spoon, pile in the fruit, reserving some of the juice left in the saucepan. Sprinkle 1-2 tablespoons of reserved fruit juices over the pudding then add a top layer of bread.
Cover with a plate that just fits, weigh it down, and put the basin in the fridge overnight.
Just before serving turn out the pudding/s onto a plate with a decent-sized rim.
Taking more of the reserved juice, brush it over the pudding to cover any white gaps that might have escaped the steeping.

Arrange any leftover fruit artistically on top; a few mint leaves also look nice, if you have some to hand.The sodding planet is burning up, Australia and now California, so please forgive me for I´m still fannying about with pudding garnishes. Dont you forget to serve it with the obligatory dollop of thick, ivory cream.
Email Post