It's a crash course for the flavours (got got do ah) It's a salad day Saturday. In the past salad had the reputation of being a “diet” food. Salads are a wonderful way to incorporate vegetables into your diet, but you have to make them craveable.People often think of salad as the back-up singer to the main event. In Mediterranean cooking, the lines are easily blurred. Remember those salads that only had soggy greens, tomatoes and a fat-free dressing? Well this is just the opposite. A salad should be the mother of invention. Put your creative head on here. A hearty Mediterranean salad is served in a big bowl and can include alongside an assortment of fresh leaves, ingredients such as nuts, dried and fresh fruit, avocado, beans, cheese and a dressing made with good extra virgin olive oil. Its a myth that salad  has to contain leaves, some of my favourite salads are with roasted vegetables, pulses, beans and grains. It’s a complete meal with moderate to low carbohydrates, rich in fibre and good fats .A side salad is something else. 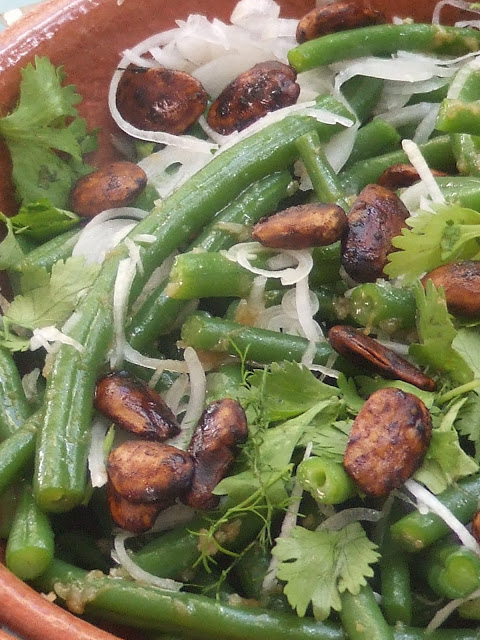 Put the almonds in a small non-stick frying pan.Stir over a medium heat until the almonds are lightly toasted, about 5 minutes.Increase the heat to medium high. Add 3 teaspoons of the soya sauce and stir until soya sauce has evaporated and coated the almonds, about 1 minute.Set aside and cool.
Cook the beans in a large pan of salted boiling water until just tender about 5 minutes.rinse well under cold water and drain well.
Whisk the oil and vinegar, garlic, ginger and the remaining teaspoon of soya sauce in a large bowl. Add the beans and toss to coat. season to taste with salt and pepper. Sprinkle the spring onions coriander and almonds over the salad and serve. 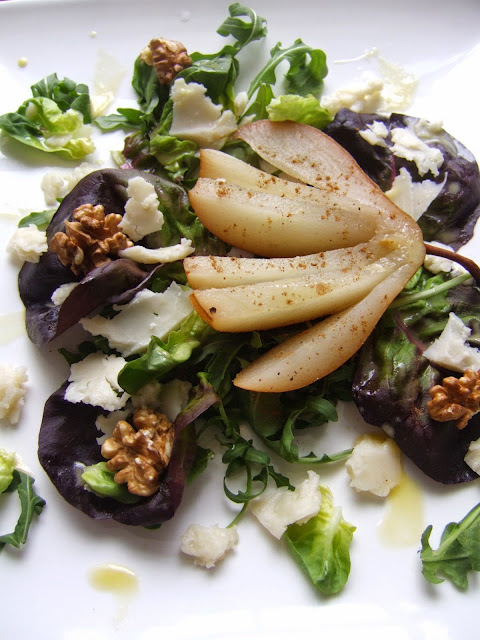 Spiced roasted Rocha pear salad with Feta cheese
you can cook the pears in advance if you need to save time -
they will keep in the fridge for up to 5 days
1 red chilli, stalk removed,finely chopped
a few sprigs of fresh thyme
thumb sized piece of root ginger peeled and cut into slithers
1 large clove of garlic peeled and sliced
2 Kaffir lime leaves (optional)
1 teaspoon whole black peppercorns
30ml cider vinegar
120g light muscovado sugar
150ml water
4 large sweet (but firm) Rocha pears,cored and cut in half lengthways
400g Feta cheese roughly crumbled
Chinese five spice for dusting
Salad leaves of your choice
1/3 cup walnut halves
Preheat the oven to 180 degrees.
Halve the pears, and carefully remove the seeds and core.
Mix together the first 8 ingredients and then pour over the water.Place the pears in an oven proof dish just large enough to hold them.Pour the mixture over them and cook for approximately 45 minutes to one hour or until they are just receptive to the tip of a sharp knife.You want to retain a bit of crunch.remove them from the oven and allow them to cool in their poaching liquid.Remove the pears when cool and keep them refrigerated until you are ready to use them.

FOR THE DRESSING
1 tsp Dijon mustard
1 small clove garlic minced
2 Tbsp extra virgin olive oil
Flor de sal and freshly ground pepper
In small bowl, whisk together 1/3 cup (75 ml) strained poaching liquid, mustard and garlic. Slowly whisk in oil; season with salt and pepper.
When ready to serve scatter mixed leaves of your choice on the plate.Cut one half of the pear into six segments almost to the stalk of the pear but still allowing the pear half to remain in one piece.Carefully rest the pear half on the centre of the salad and fan the segments apart.Crumble Feta cheese over the salad then drizzle over the dressing.Scatter the salad with a smidgeon of halved walnuts. Dust the pear with chinese five spice as you would use pepper.Serve immediately.
Roasted carrot and beetroot salad
with a Moroccan spiced salad dressing
(pictured above)
1kg large carrots peeled
4 tbsp extra virgin olive oil
1/2 cup freshly squeezed orange juice
Flor de sal
2 small garlic cloves finely chopped
Freshly grated raw beetroot
handful of torn mint leaves
handful torn coriander leaves
handful torn flat leaf parsley
Freshly ground black pepper
I medium sized beetroot washed and outer skin peeled
Cut the carrots into 7.5cm (3 inch) batons
Halve the lower ends lengthways, then cut the thicker upper parts in quarters lengthways. put them all in a large shallow roasting tray and toss them well with the olive oil,orange juice and flor de sal.Roast for about 45 minutes at 200C for about 45 minutes,turning occasionally until tender and patched with brown but still retaining some texture.While the carrots are roasting, grate the beetroot. Turn the carrots out  into a mixing bowl and allow to cool completely.Meanwhile make the dressing.

Moroccan spiced salad dressing
1 tbsp cumin seeds
1 tsp coriander seeds
1/2 tsp turmeric
1/4 tsp ground cinnamon
3tbsp lemon juice
3tbsp extra virgin olive oil
2 garlic cloves peeled and crushed with tsp flor de sal
Stir the cumin and coriander seeds in small  heavy dry saucepan until toasted and fragrant (about 30 seconds).Remove from the heat and stir in the turmeric and cinnamon.Allow to cool completely.Grind in a pestle and mortar. In asmall bowl combine the spices with the lemon juice,garlic,and olive oil.Whisk to blend well.this dressing can be made in advance and kept in the refrigerator for a few days.

When ready to serve toss the carrot and herbs with the dressing in a mixing bowl.
Toss the grated beetroot in another bowl and then carefully compose the salad on a serving dish
*For those who are new here, please note that you can click here and check the previous post.
Email Post