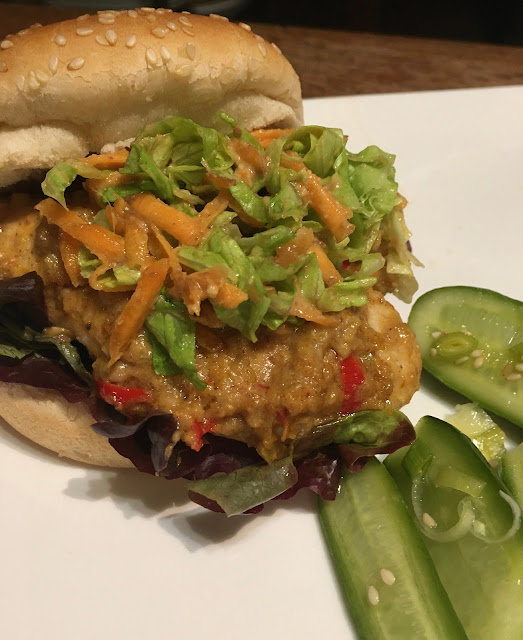 "Quickling" I call it. This summer, I've quick-pickled everything in my sight (I´ve yet to try an avocado athough!!!). Simply stated, quickly pickling is a game-changer. The technique—a version of vinegar pickling that doesn’t require a full canning process—produces briny, crunchy pickled vegetables in just a couple hours. Heat the brine until sugar and salt dissolve, then pour it over the vegetables and let them cool in the jar—voila, pickles. Quick pickling won’t create shelf-stable vegetables—you’ll need to refrigerate them and eat them in a day or two—but the vinegar and sugar add extra flavour to sandwiches, salads, tacos, burgers  condiments, and anything else
you want to pair them up with.
These quick sesame lemon pickled summer cucumbers act as the perfect foil for all the flavours of Thai chicken satay in burger form. I use the word burger loosely as I used grilled chicken breasts butterflied, and didn´t in theory make a patty, so if you want me to be true to myself it was chicken breast tossed in a spicy peanut sauce in a seeded burger bun. So please call it a posh sandwich if you prefer. As an accompaniment I made some quick Asian inspired pickles and a Thai inspired slaw.I have had the idea for these chicken satay inspired burgers on my mind for months and now with the warmer weather it was time to make them! The basic idea behind these burgers is to include all of the flavours of tasty Thai style chicken satay, right down to serving them tossed
in a spicy peanut dipping sauce and pickled cucumbers.
There are a couple ways of making satay sauce. One can go the traditional way and grind up peanuts to make it from scratch. Or then there is the cheat's method using peanut butter ( I have to say home made in this case so i did actually shell the peanuts and grind them).  Both recipes are easy to make but sometimes a little laziness takes over in the kitchen and this time it was the latter. 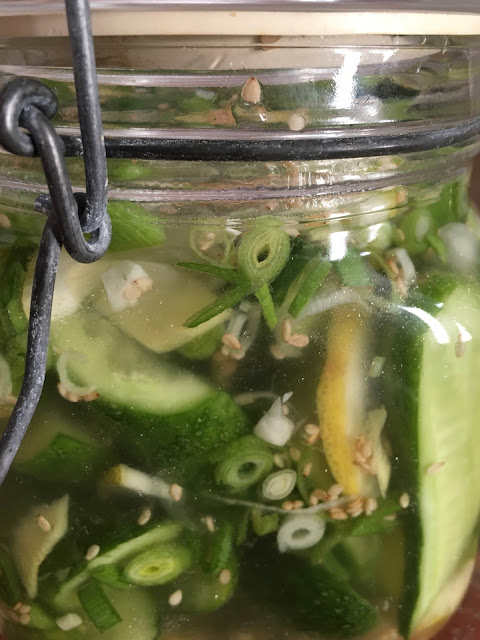 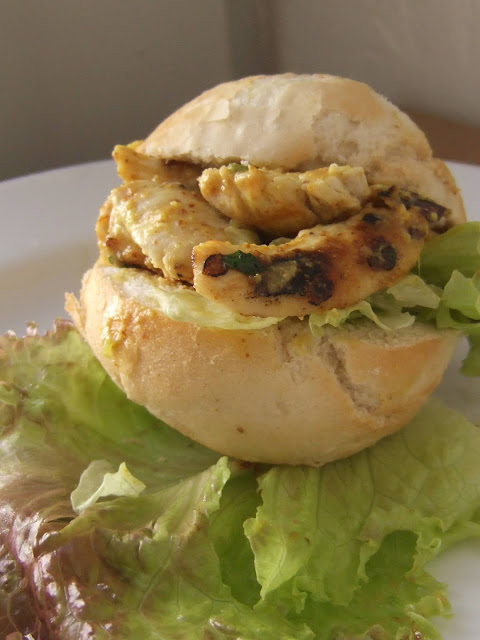 1 shallot, peeled and chopped
2 cloves of garlic,peeled and crushed
a small thumb of ginger peeled and grated
1 stem of lemongrass, tender part only, shredded
1 tablespoon vegetable oil
3 small hot piri piri chillies,seeded if you wish ,finely chopped
1 teaspoon good quality curry powder
150g peanut or almond butter
3 heaped tablespoons chopped fresh coriander
teaspoon sugar
Soften and very lightly brown the chopped shallot,garlic,ginger and lemongrass in the oil over a moderate heat.Stir in the chillies and curry powder and continue cooking for a couple of minutes.Add the peanut butter and 250ml water and bring to the boil.Season with coriander and sugar to taste.Toss the butterflied chicken in the warm sauce and with a sprinkling of coleslaw put in a burger bun to make the perfect satay burger.serve with the pickled cucumbers on the side.Here comes summmer....and another quick pickle.This one is on the principle of an escabeche and is ready in a couple of hours ,but the longer you leave it (not longer than 3 days) the  colour of the onions intensifies. 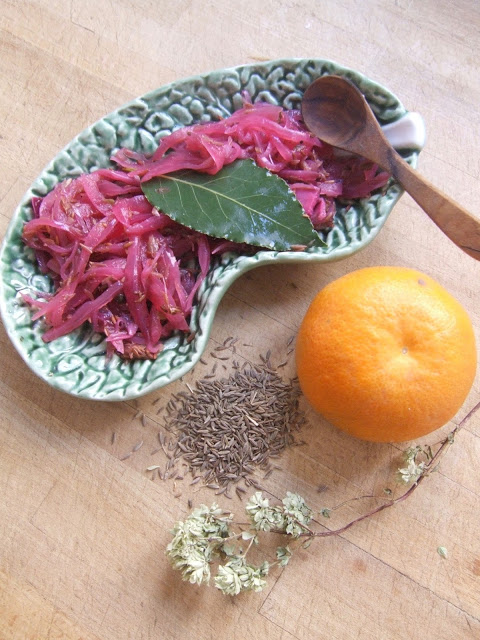 Place onion, peppercorns, cumin,  oregano and bay leaves in a small saucepan and cover with water. Bring to a boil over high heat. Remove from heat, drain carefully, and transfer onions to a sealable container, such as a Kilner or Mason jar.
Add citrus juice. Onions should be submerged at this point; if they aren't, top off with extra  juice. Stir to combine, season to taste with salt (they should be quite salty—use about 1 teaspoon Flor de sal , cover, and refrigerate until colour deepens, about 4 hours. Onions can be stored in the refrigerator for up to 2 weeks. Do not eat peppercorns, or bay leaves.
They are a great addition to, sandwiches, burgers and hot dogs, as well as more traditionally, fresh seafood. Make a lot—you're going to want to pile these on everything. 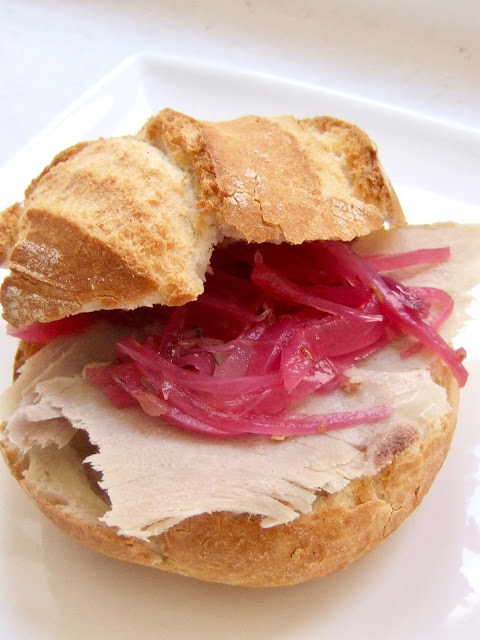 What scone is scone