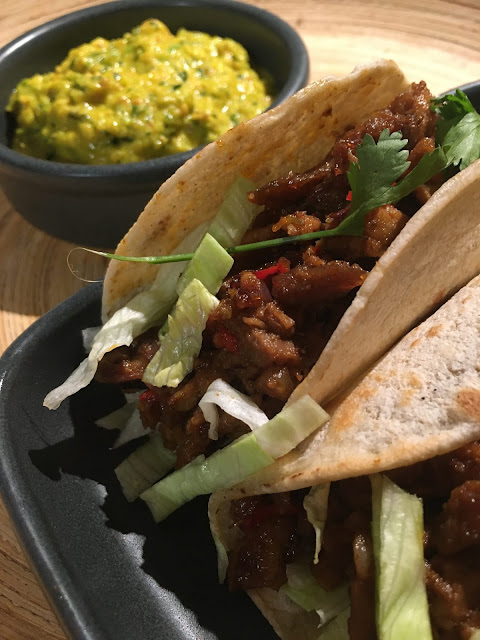 For this one I´m taking you "South of  the border down Mexico way" but with some Indian eccentricity en route. I am serving these very Mexican inspired tacos with my fresh take on a raita,( may I call it a chatni I can hear Imelda Staunton saying).

In more normal times food trends often started in restaurants, with top chefs venturing into the previously uncharted territories. Food forecasters obviously were prominent. Sometimes they got written up in food magazines or blogs. But the reality was that soon after, you could find the required trending ingredients on supermarket shelves. Now the pandemic has determined what we eat, from shortcuts to slow cookers. People have been travelling with their taste buds, recreating dishes they used to eat  out but now have to cook instead. A big pandemic eating trend was Mexican food. There were more searches than ever during the peak of the pandemic for Mexican recipes.
Being the ever frugal minded individual that I am, I never throw any food away. Being able to eat twice from the same meal is something that I strive to do for many reasons, but I don’t really like to eat the exact same thing when I do that. There has to be some sort of twist on it so that the leftovers don’t taste like…. well, leftovers. Transforming
them into something else is one of my favourite challenges. Tacos are a great way to incorporate leftovers into a new dish, and that’s what I went for with my leftover pork roast from the weekend. Now, you don’t have to use just leftover roast. You don’t even have to use pork. Just chop up whatever leftover meat you have, and hey ho here comes new dinner. What I did here wowed us so much that I have created an actual recipe that I
can make again from scratch in the absence of leftovers.
This is how I did it, I chopped up my leftover pork roast into small pieces, seasoned them well and  warmed them in a skillet along with some sauteed red onion. Just a couple of simple additions gives the meat a whole new flavour, and the finished product in no
way resembles the original dish. You can use commercial taco shells if you wish, but If you have the time using corn tortillas, and lightly frying them on each side takes it to
another level. I served it alongside a fresh raita/ chutney, which really just packed on more flavour and aided in further transforming the meal into something new. Sprinkle on a little cheese if you like, an extra soupçon of coriander, and a squeeze of lime and you have a pork taco in front of you that is better than your local Mexican takeaway, at just a fraction of the price. Actually – even cheaper than a fraction of the price since this
dish started off as leftovers.
The raita /chatni  is Nepalese inspired but with some nods to West Bengal. The two regions border each other, and Nepal borders China and Tibet so has adopted more exotic eastern flavours. Nepal would never use cream or yoghurt in their cuisine, except in puddings or to use as straight sweetened yoghurt, whereas the indians use cream and yoghurt in curries, sauces and other guises.

"Hey, Rosita - come quick
Down at the cantina they giving green stamps with tequila!!"