Flip flops, nerd immunity, and suggestions for a beach picnic

Portugal and the UK have had close ties dating back hundreds of years. The Treaty of Windsor, the Anglo-Portuguese Treaty of 1373 was signed on 16 June 1373 between King Edward III of England and King Ferdinand and Queen Eleanor of Portugal. It established a treaty of "perpetual friendships, unions (and) alliances" between the two seafaring nations. It is the oldest active treaty in the world, the treaty was temporarily void during the Iberian Union. But these strong ties are currently being threatened by an incompetent British government. It is now a second time that Johnson and his cabal of intrigue have shafted Portugal. It was also for a period of three weeks in 2020 that BJ gave hope and expectations of a good summer for tourism and hospitality, and hence, the economy for Portugal. Then the corridor was banged shut. And what has he done again? The same thing.
The British government are allied to holidays in the sun as they are known by the footwear of holidaymakers, they flip flop from one thought to another, one decision to another, one muddled and failed strategy to another.
Road maps to recovery, U-turns, Red, amber, green. Why not add pink, brown or black (though those colours may give rise to  complaints on the back of of the infamous description of Muslims dressed like letterboxes).Treaty or no treaty, times change but traditions do not. The Algarve remains the preferred holiday destination for many and most certainly the Portuguese themselves. Like any other Mediterranean country the population of the north migrates to the southern coast for the months of July and August. During these months  it can be difficult to find a space to extend your towel on the sand. Sometimes when you arrive at the beach during these peak months it is like witnessing the social behaviour of sheep. Sheep display an intensely gregarious social instinct that allows them to bond closely with other sheep and preferentially to related flock members. Flock mentality movements protect individuals from predators. But in the southern region of the country, not all the beaches are full of tourists. All it takes is a short walk along the beach and you will be in your own safe haven, where you´re uninterrupted and there´s no intrusive television screening incessant football on each and every channel.


There are beaches in the Algarve that are a true paradise and rarely visited by travellers. Without having to travel many kilometers you can find sandy deserts, surrounded by nature and far from urban areas. Most of these deserted beaches have no infrastructure and support services. The access path is often difficult and conditioned. If you are a naturist you will definitely love these little paradises.

So in anticipation of the most thrilling summer of the century, a beach trip this summer, even a single day on the sand seems so dreamy that we’d happily drop everything for a hit of sun and saltwater. Of course, a truly enjoyable day at the beach requires a bit of forethought and packing, lest one settles in and realise you forgot proper shades, a good book, even sunscreen. First off a bag that fits sunglasses, a book, sunscreen, and even your water bottle, and protects all your special items from sand. And what kind of sustenance do you pack in there? Good snacks are essential, too. Cherry tomatoes, grapes, cherries, peaches water, biscuits, nuts are standard beach fare.  Muslin or linen wraps work as great alternatives to bulky towels—they look chic and take up way less room.
Water, water, water. As we all try to be more responsible, lose the plastic, and invest in a long-term solution one item has suddenly become a must-have, whether you're picnicking or heading to the beach: a reusable water bottle. It's not just that plastic water bottles are bad news for the environment, though. Staying hydrated is an important part of staying well on the go. Oh believe me we know how to make a day on the beach seem like a millionaires holiday.
As blissful as a warm beach day can be, it can also come with stress factors. Applying sunscreen evenly, finding a parking space, and generally ensuring that your budgie smugglers stay in place can all be enough to make our temperatures rise. So when sand happens to sneak its way into your freshly bought food, it's only natural that we tend to react like a foghorn.
Instead of waiting until you're steps from the waves to buy lunch—which is either stored in flimsy foil takeaway boxes or open to the elements—pack a few items that can be easily stowed away until you're ready to eat. I've picked out some easy and practical  foods to take to the beach, complete with recipes that you can re-create with a little planning and a trusty cooler. Once other beachgoers see your delicious spread, they may wish for a seat under your umbrella. So what do super beachgoers pack in their bags? Polarized sunglasses are a must so that you can take in the incredible colours of the sparkling sea. And a solar phone charger to avoid running out of power while on your sun lounger.
A small handy cool bag is essential, not a chest that has to be carried by two people; Freeze water in large Ziploc bags so you have slow melt chunks of ice to cool things down. Inside your cooler are pre-made Aperol Spritz and cucumber pepped Perrier or Pellegrino, a Hydro Flask with fresh water for your pooch, if relevant.
Packing food for a picnic in the park is pretty easy. But when your picnic happens to be on the beach, there’s a new set of rules and a few more factors to consider before filling your basket or cooler. For starters, as I have already mentioned there’s the sand. It’s totally obvious, but no matter how hard you plan and how many precautions you take, it inevitably ends up everywhere, including in your sandwich. There’s also the wind — the beach can be breezy, which means that sand and salt swirl around, attaching themselves to anything that’s remotely sticky, wet, or, let’s face it, edible. So pack finger food and salads in lidded containers that can be eaten from directly with a fork.Save yourself time on the day by preparing the majority of your food the day before. Pasta can be cooked, scotch eggs can be prepared. Pataniscas, croquetas and meatballs can all be fried the day before. Tiramisu or trifle benefits from an overnight stay in the fridge. I´ve picked out some easy make in advance transportable foods to take to the beach, complete with recipes that you can re-create with a little planning and a trusty cooler. These all  happen to not require utensils, or for that matter, plates. Put them all in a container and serve them from there—it's that simple . 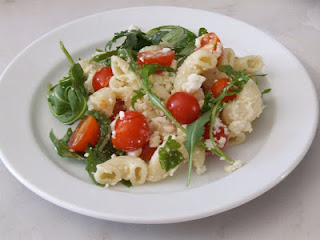 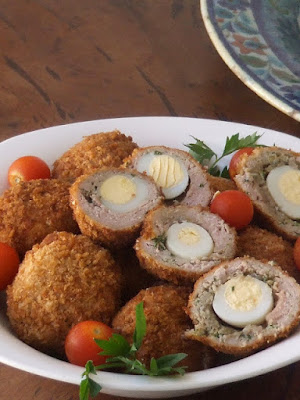 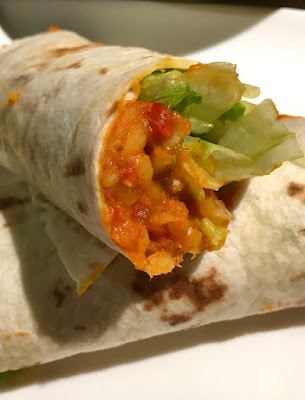 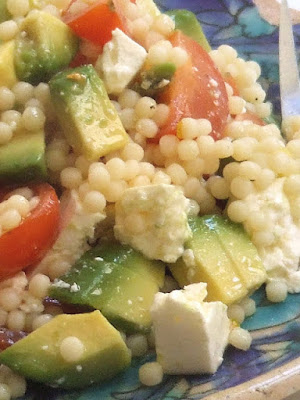 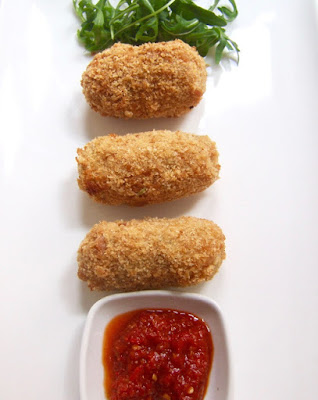 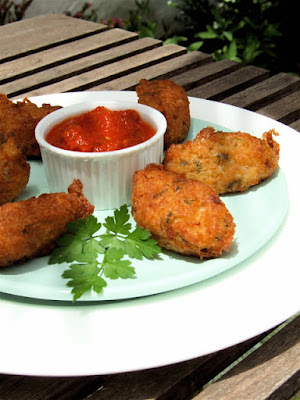 Pataniscas de bacalhau Tailandes
Pataniscas originated in the Algarve:
There are a few versions around,
but this is certainly the sort of salt cod dish you can modify.
I have put a certain Thai stamp on mine.

Put the fish, Kaffir lime leaves or lemongrass, if using, fish sauce, coriander leaves, chillies and spring onions into a food processor.Blend briefly then tip into a bowl and stir in the breadcrumbs and enough flour to bring the mixture together, it should be firm enough to be able to shape into flat cakes or balls. Mould the mixture with your hands into patties, cakes or balls, to the size you require. The above quantity will make 12 5cm patties. Dust these with a little flour, then fry them in shallow oil till crispy and golden about 3-4 minutes each side.
Serve as a starter, canape or snack with a pot of chilli dipping sauce 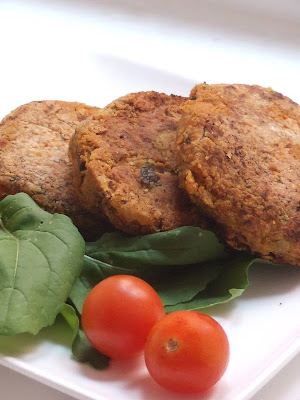 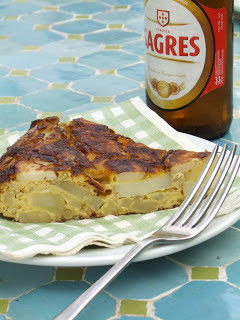 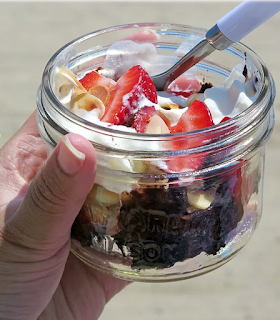 Tiramisu / Trifles in a jar 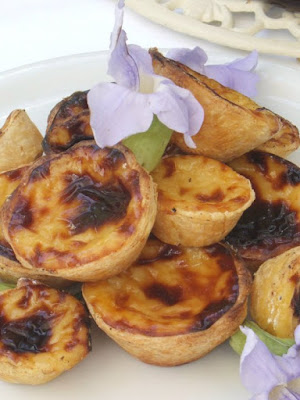 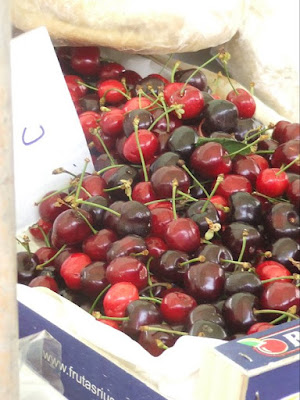 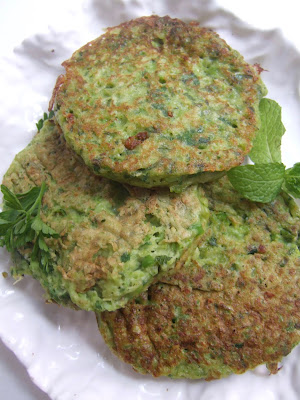 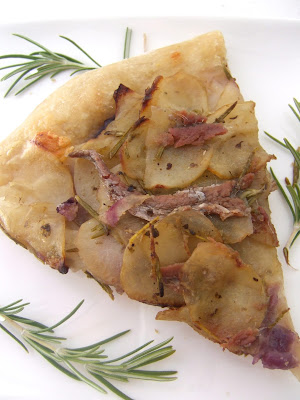 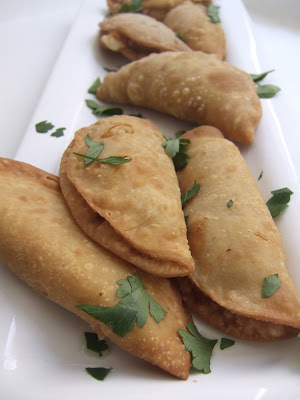 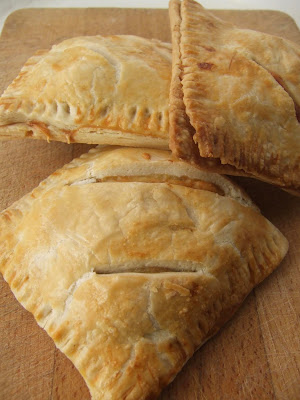