Google elimination diet and a myriad of results pop up. So what exactly are elimination diets and do you need to go on one? Elimination diets are used to help identify foods that may be related to symptoms that make us feel uncomfortable and other related problems. They are meant to be followed for a relatively short period of time, ranging anything from four to eight weeks. An elimination diet has been defined as “an investigational short-term or possible lifelong eating plan that omits one or more foods suspected or known to cause an adverse food reaction or allergic response". Elimination diets require motivation, and don't I know it? It can be tough to make the needed dietary changes even though it is only on a short-term basis.It can cause temporary clinical depression.You might be instructed to eliminate one food at a time, groups of similar foods such as a food group, or multiple food items. For example, if lactose intolerance is suspected, a health care provider might recommend you avoid all dairy foods, including milk, yogurt, and cheese. If gluten intolerance is suspected, you will be given a list of foods to restrict that contain gluten. These may include wheat, rye, barley, and processed foods that may contain gluten such as soya sauce* malt vinegar, pre-seasoned meat, and some other processed products. The point of these diets is to remove certain foods known to cause uncomfortable symptoms and reintroduce them at a later time while testing for symptoms. It only lasts 5–6 weeks and is used to help those with a sensitive gut, food intolerance or food allergy identify which foods are contributing to their symptoms. In that way, an elimination diet may alleviate symptoms.
Prior to their arrival our recent guests ( we were very flattered to have been chosen again for a return visit)  informed us of a gluten free diet. I saw it as challenge and hoped that I might be able to offer some help, having tried gluten free options among my many elimination diets over the past two years. A little research needed to be done and the answer from google was chick peas, both whole and ground in flour form. I recalled having made spicy chickpea muffins with some left over hummus I had made, and with a twist to the flour option I replaced regular flour with a combination of chickpea and rice flours 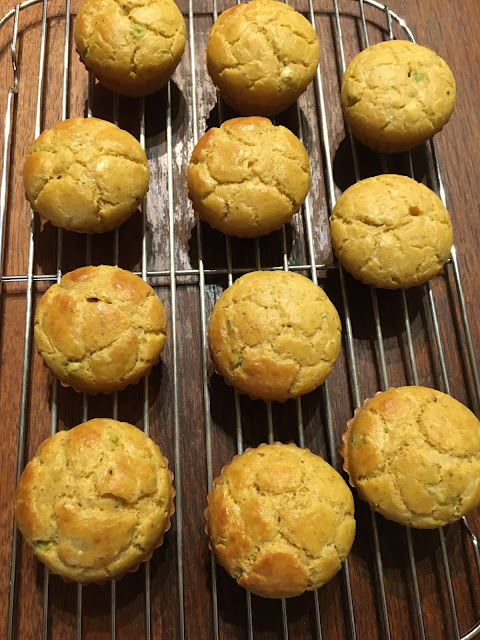 Spicy Gluten free hummus muffinsmakes 12 1/2 cup prepared spicy hummus1/3 cup milk3 large eggs1 cup garam / chick pea flour flour
1/4 cup rice flour
1 tsp baking powder  1/2 tsp chilli powder174 tsp flor de sal1/2 cup cheddar cheese grated2- 3 spring onions shredded Start by mixing your wet ingredients together in a medium bowl. Add the hummus into this bowl and whisk it well. You don’t actually want any lumps of hummus in the batter.
In the dry bowl, add in the flour, leavening ingredients, cheese, scallions, and spices. Toss this all together really well so the cheese and scallions get lightly coated in flour. This will help them stay evenly distributed in the final batter.The final Hummus Muffins batter should be on the thick side for sure. Thicker than pancake batter, definitely.If your batter is too thick (it should be slowly pourable), then add a bit more milk until it’s the right consistency.
Grease or butter your muffin tin well and fill them up to just below the top.as you can see mine rose quite considerably.Bake for about 30minutes at 200C until they are puffed and a bit crackly on top.Let them cool a bit before popping them out.They are great on their own for breakfast and make a lovely accompaniment to a bowl of hot soup.they have a great shelf life of 3-4 days if you dont finish them all the same afternoon they come out of the oven.

Gluten-free chocolate brownies (top)
I have established quite a reputation for my salt caramel brownies since I first served them as a pudding to round off an open air lunch hosted by Salmarim 9 years ago on the local salt pans. A lot has happened in those last 11 years. Times have certainly changed and so has my cooking, for the better I hope, and my brownies are now gluten free.
Prep 15 min
Cook 35 min
Makes 1 tray (about 16 squares )

250g butter, diced
300g dark chocolate, roughly chopped
3 eggs
275g soft light brown sugar
100g walnuts, or other nuts (optional)
75g cornflour
1 tsp fine salt
1 tsp ground coffee (optional)Brownies are well adaptable to a gluten-free diet, because at their best, they are a mass of chocolate and butter, barely held together by as little flour as you can get away with. Without a thought I have always used my bog standard plain white. What that flour is hardly seemed to matter too much to me until gluten free diets became the order of the day from some doctors.Heat the oven to 180C (160C fan)/350F/gas 4, and grease and line a tin about 24cm square with baking paper. Melt the butter and chocolate in a heatproof bowl set over, but not touching, a pan of simmering water, stirring occasionally to help them along. Lift off
and set aside.
Meanwhile, whisk the eggs with the sugar until they’ve about tripled in size – electric beaters will help
here, if you have them. Roughly chop the nuts, if using.
Fold the cornflour, salt and coffee, if using, into the egg mix, then stir in the nuts, if using.
Pour into the tin and bake for about 35 minutes, or until set on top but still slightly wobbly in the middle. While the brownies are baking, quarter-fill a sink with cold water, and put the tin straight in there the moment it comes out of the oven. Leave to cool before cutting into squares or triangles and enjoying with a cuppa.
What works for one elimination however might not work for another. Gluten free works here but as I learnt to my detriment, lactose intolerant doesn't. I’m also duty-bound, to recommend you consume these in moderation.

*It often comes as a shock to people who are new to the gluten-free diet that soy sauce usually isn't gluten-free. Most brands contain wheat as one of their primary ingredients. However, there is a type of soy sauce called tamari that's traditionally made without wheat., and the good news is that there's a small (but growing) number of tamari-style gluten-free soy sauce brands on the market.Look out for that iconic jar but with blue cap instead of a red one.
3 other gluten free recipes
Pepper seared tuna and spiced lentil salad
Watermelon gazpachoLamb cutlets with chilli roasted butternut salad
2 other useful gluten free websites
https://kellyjonesnutrition.com/chickpea-flour-muffins/
https://www.makeuseof.com/best-websites-find-gluten-free-vegan-recipes/
Email Post